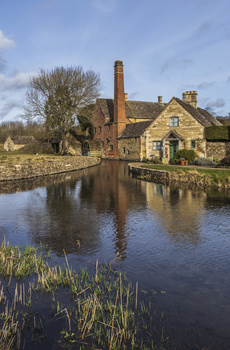 The village of Lower Slaughter is built on both banks of the River Eye, a slow-moving stream crossed by two footbridges, which also flows through Upper Slaughter. At the west end of the village there is a 19th-century water mill with an undershot waterwheel and a chimney for additional steam power.

There is a ford where the river widens in the village and several small stone footbridges join the two sides of the community. While the mill is built of red brick most of the 16th and 17th century homes in the village use Cotswold limestone and are adorned with mullioned windows and often with other embellishments such as projecting gables.
The name of the village derives from the Old English term "slough" meaning "wet land".

The mill, though it looks ancient, actually dates to the 19th century, and remained in use until 1958.