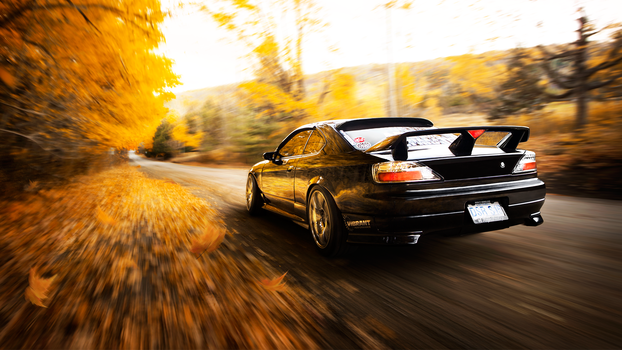 Before you get too excited no thats not a typo, more of a tongue in cheek reference to the images origins. I photographed this car, Lewis Moorhead (https://fstoppers.com/profile/82670) edited the image.

This was probably one of the more memorable shoots - I had to drive 3hrs to get to the location that was scouted out by the client, it was a typical Ontario dirt road with a privileged neighbourhood. My client was actually a competition winner, I had held a facebook competition (trying to reach 200 likes!) and had offered up a rig shot for the lucky winner, he in turn used the shoot to photograph one of his friends racing Silvia.

Turns out the Silvia was a little more than a large metal brick, it arrived on the trailer, missing engine and any parts to make it roll. We found a location that we all liked and the car was then rolled off the trailer into a position, on this quiet small Ontario road. Well. It was supposed to be quiet, this however was not the case as many cars passed by, and then catching the attention of 3 Police officers... Lights come on, the driver realises that they had parked it in a non-parking area. To add to the issues, the car had a "vanity" plate that wasn't real - just for show on the track, and there was 0 paper work accompanying the vehicle. After 45mins of convincing the Police that we were harmless we were off shooting again, our window of light was gone, the sun had dipped 35 mins into the discussion.

We grabbed a few fast ones near the bridge then I told them we had to hustle to get to the main location (the golden hill I named it), I rigged up the car fast and then we rattled off 15 or so images. Rigging is a fun way to shoot cars, it's allot of trial and error, I am definitely still learning! The camera was the 5Dmk3 sporting the fancy 17-40mm f4 L with a CPL on it, the ND6 pushed the light back by 6 stops and I was able to eek out a 1.3s shot @ f5 - the shortest time value I've used for rigging, the reason behind it was the floor - being... Gravelly, the blur was a little too "jittery" for me, I had some longer time grabs I wasn't pleased with the look, the floor looked more shaky than speedy. I knew I could rely on the expertise of my retoucher to add more speed if the final image needed it.

I always shoot flat colours to add colours, but I'm very muted usually in my approach, I've also always edited my own shots, this time I'd hand it over to another artist. Lewis has a glorious colour palette and his magic made this image allot more colourful than I usually go! We had talked about working together before and we do have some more shoots planned, maybe soon there'll be some video on my side as well as the graphic work! Lewis Moorhead is a Bristol based Creative retoucher, his website is http://www.flewdesigns.com/ as you'll see this is definitely a different look and feel being more realistic, BIG KUDOS to Lewis to switching up his look to this more commercial automotive feel! I'd love to explain what Lewis did, but I think he does a great job of that in this video: (https://youtu.be/klAWilKOpkg)!

There you have it, 2 artists, different sides of the globe, 1 image.