Why You Should Care About Apple's Quietly Released Powerful New iMacs

On Tuesday, Apple quietly (and I mean VERY quietly) released the newest update to the iMac line of personal computers. It's curious why they (Apple) didn't make any sort of major announcement, or even blend this into the September 10th announcement of the iPhone 5S. I personally think that this update is fairly newsworthy, not only because the iMac has become one of the staples in a lot of professional studio's digital labs and Tech carts, but it's a huge leap in performance over it's predecessor, if you believe the info on Apple's website that is.

The updated iMacs now have the new Intel i5 "Haswell" processor (upgradeable to i7), the new 802.11ac WiFi, PCIe SSD drive bay, and last but not least the NVIDIA's GeForce GTX 7oo series graphics cards. What does all that mean?  Simply put; It's REALLY FAST! For me personally, the processor isn't the big news to me.  I'm happy to get the newest technology, but realistically the programs us photographers use run perfectly well with the old "Ivy Bridge" processors. The kicker for me (and why I went ahead and made the purchase) was the graphics card. The NVIDIA GeForce GTX 780M comes with a WHOPPING 4gb of VRam that Photoshop and Lightroom are going to just LOVE to have at their disposal. Another interesting upgrade is the addition of the PCIe bus for the SSD and Fusion Drives. This connection is not only faster, but means that Apple has considered letting us add more drive space at a later date.  Which, if you are like me, love running my system and programs off of SSD, and keeping everything else on spinning drives. 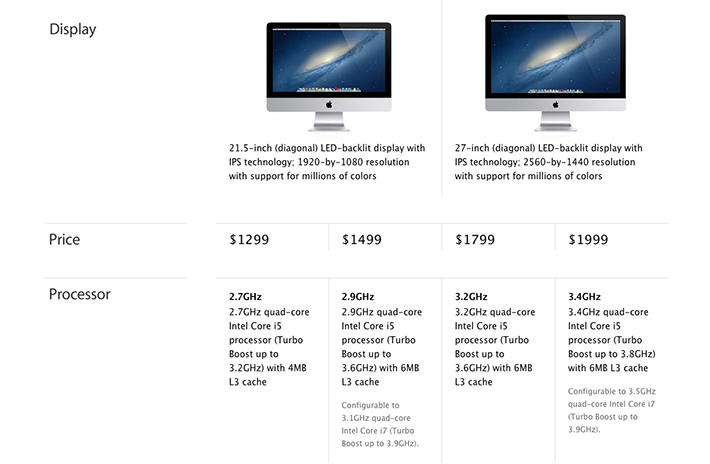 One final thing I've noticed is that the price for these iMacs seem to be slightly lower than their previous incarnations. I know this because I have been in the market for an iMac for about 3 months, and kept track of the previous stats (and costs). Turns out that the "top of the line" iMac that I customized 3 months ago would have cost me roughly $100 more. 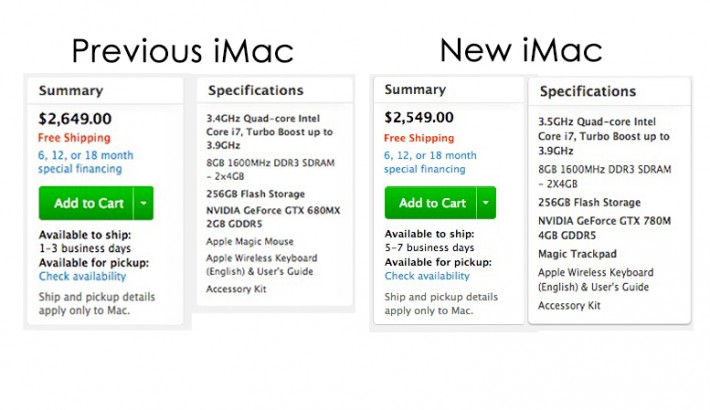 All of that being said, I'm pretty excited about this update to the iMacs. I'm sure there are tech whizzes out there that were looking for more, and maybe that is why Apple decided to just, nonchalantly upgrade the line. Who knows. All I know is that my current machine is out of warranty, and 4gb of VRAM sounds pretty tasty to me, especially coming in $100 less than the last version!

What do you think of the iMac update?  What is your theory as to why the update didn't come with more pomp and circumstance?

Commenting is closed for this article.

1999 dollars and you still get an i5? I wouldn't call it powerful honestly.
Yeah, you can upgrade, but this means more $$.

Agreed!
If i had the money, dont get me wrong, i would love a mac. Not because theyre better/worse, but because well... its a Mac, thats all haha!

I managed to get an i7 processor, 16gb ram, 256SSD and some other bits, for less than £600. Im sure i could find a half decent graphics card and it would be better than the Mac spec for less than half the cost!

remember you can install MAC OS X on a pc with just a little prep work and follow an online guide.
You'll be able to run all the mac software etc..
Just an f y i if anyone's interested.

Always been interested, but it seems like a ton of work and how exactly do updates work?

+1 for this... you can build a desktop PC with these specs for well under $2k. im doing it right now... and then hackintosh it. oh and wait.. u can even ugprade it without sending it to apple lol.

I won't go into receipts but anyone can take the specs of a mac that's not as upgradeable and spec out a custom build and pick out everything THEY need and find deals...etc.

If I was a studio I think I might spring for a mac if I had the cash, the desk real estate these take up is silly small!

I would love to do this, but I'd have to pay someone to do it. I wouldn't dare waste my time trying. Hmmm... time for me to go to some computer repair places and ask, or do you have another suggestion?

I have a few friends that went down this route,it's not worth the hassle,better to pick up a used Mac..

I have a few friends that went down this route and they couldn't be happier. Latest technology/equipment = speed, with the operating system and programs they know and love.
.

Mac fanboys will come up with a "but it always works until it doesn't" retort.

two completely different processors, The imac uses desktop CPU, while the mini runs laptop CPU. for the vast majority of non professional applications this doesn't really matter. If you need CPU power you already know who you are ;)

This doesn't mean that Mobile CPU are slow, they are optimized for better power consumption, and if you take a look on geekbench you will see that my cheap mac mini i7 is not that slow :-)

But yet they stick a mobile graphics card in an iMac! Doh.

Using a mac mini as server uses a whole lot less power than a Desktop PC server or a real one.
Yes you don't get 12 drive bays and other sweet stuff, but it only costs 650 (cheapest) and costs less to run. A desktop cpu just doesn't make sense.

I've been comparing the price of a PC vs a Mac and yes it's more expansive to get the apple, But, when you buy a 27 inches model, you get that big screen that cost alone around 900$ when you buy it's dell counterpart ...it's a lot of money you must add to the price when you build a similar PC. You will save around 200-300$ with a pc ...

Well said. If you are smart you can find some monitor alternatives for half the cost, but at local stores and online mega stores, this type of monitor will run you close to a grand. Still... someone wishing to upgrade their desktop with a killer video card and upgrade their CPU could come in without spending a fortune.

One thing to consider for PC users.... you don't have to run iOS on these things. They are all PC on the inside and run Windows wonderfully.

what about the sRGB coverage of these? I've never looked into it and I know they are pretty but how well do they cover the colors and calibrate?

You don't need to calibrate the new iMacs. They are factory calibrated.

That still doesn't say how well they display the sRGB color space, and they will need calibrated over time. I was curious how they compare to the professional $900+ screens that are tailored to display colors accurately.

Some screens are also a bitch to calibrate, another valid concern.

Most if not all apple products do look great from the factory but that doesn't mean they are accurate.

Keep in mind though, that you need to pay repeatedly for the monitor when you choose iMac. Or any other solution that goes by the same concept (system and monitor in one piece) for that matter...

In the past my monitors has almost always lasted 2-3 computer upgrades... So paying those 900$ for a good monitor can be a better investment than putting those same 900$ into buying a system like an iMac...

You are right, I'm not defending the iMac vs the PC, I'm just saying that you have to think about that monitor into consideration when you compare the prices. A monitor that size and resolution is quite expensive ...

Didn't get anywhere with my other comment, do you happen to know how the iMac's screen compares to the $900+ monitors you speak of?

That's right but if you have a tower instead of an "all-in-one" like an iMac you can keep your monitor when changing the computer. So might be more cost efficient on the long term.
And not everyone likes the super glossy screen of the iMac… Mac screen are stil not as good as Eizo's IMO.

iMac are great but are quite expensive for what you get! If you can build your own computer it gets much cheaper! (note that I work with both PCs and Macs, not a fanboy here!)

Don't know how better it can be against the iMac counterpart

I think you're looking at the U2713H? That's AH-IPS. Don't quote me on this, but I think iMac's aren't AH-IPS. That'll be a much cheaper U2713HM in comparison (plus no glossy screen). #justsayin'

the new version of the new iPad was the same. It was upgraded in the first half of this year to no pomp and ceremony. I presume it is not to make people mad, who had just bought the new version of the iPad then or the iMac now. Also you can only get all the attention so many times and the iPhone needed to be big so they did not want anything steeling its spotlight

"The kicker for me (and why I went ahead and made the purchase) was the graphics card."

Hey, buy what you like, but that seems like a mighty big purchase for a $300 graphics card. Honestly, I tune out when the PC v. Mac debates start (use what you like, just shut up about it), but am I right in thinking that a Mac can't be updated the way a PC can?

Obviously, I am a PC user (although I have used a Mac many years ago), but I am not asserting PCs superiority in any way. I would actually like to know.

And it's a "M" card, so a weaker mobile version. You could upgrade the old mac pros, but now with the new upcoming ones they went all the way to more consumer products in my opinion. With an iMac there is not much space and you always have to pay for the new included display which is some kind of ridiculous for people who upgrade more often than every 5 years.

Everyone should get what he wants and if someone prefers Mac OS there is no other option (beside a hackintosh that I wouldn't use for productivity or a business). But people could build a pc which is as fast or faster for 700-800€ including a silent case and spent the rest of the money on a nice trip or some models and a stylist to push their portfolio.