The first automobiles were controlled by something called a tiller (similar to how ships were steered). It was, obviously, not the most practical or efficient means of control. However, in 1894, the first steering wheel was fitted on a four horsepower Panhard for a race from Paris to Rouen. Within ten years, nearly all tillers had been replaced by steering wheels. The mouse, although all-purpose, is the tiller of Lightroom. Ladies and gentlemen, the PFixer by Pusher Labs is the steering wheel we’ve been waiting for.

Last month, after spending almost a straight 48 hours racking my brain to reprogram a MIDI controller desk to work with the sliders in Lightroom, I was made aware of PFixer by Pusher Labs (for Mac only). After spending the last week with PFixer, I can easily say that this is the best addition to my workflow since a Wacom tablet.

First of all, I absolutely love using my MIDI controller desk to process my images. ACTUAL sliders to adjust sliders? WITH BOTH HANDS? Who wouldn’t want that? It’s more efficient than moving a mouse. It’s more accurate than lifting up a stylus pen and getting a jump in the setting. It’s less keystrokes than using keyboard shortcuts or inputting numbers. I’ll take that deal any day of the week.

My favorite part, however, is the ability to manipulate multiple sliders at the same time. Entire tonal ranges can be at your fingertips! [Insert maniacal laugh here] This is probably the greatest unmentioned feature about the board. You can make entire tonal sets brighter or darker (like highlights and whites or shadows and blacks), without changing the contrast within that range. It’s wonderful.

All that aside, how does PFixer work? And how does this product differ from the do-it-yourself method?

First, the hardware. The PFixer Panel ($249.99) is based on the exact same MIDI controller desk that I already had in place (if you also have it, Pusher Labs sells an overlay that sticks right on top for $19.99). The board is a Behringer BCF-2000. If you prefer knobs to sliders, there is the PFixer Encoder ($179.99). It has lots of knobs.

Second, the PFixer software ($99.99 for MacOS only). The do-it-yourself method requires programming and a lot of troubleshooting on buggy, unsupported software. Knobroom is a Lightroom plug-in, so it works within the software. PFixer is an external program that sits on top, and must be synced up when Lightroom is opened. I have found that if you have hundreds of presets, it will take a bit longer. In recent updates, the sync process has become exponentially faster, so the speed at which the program syncs isn’t very long. When deciding between the plugin and the program, I will pick PFixer every time. It’s more accurate, WAY less buggy and gives me more programming options. Sure, I COULD spend all my time programming two hundred different settings and configurations into Knobroom, OR I could install PFixer, have more options and less headache. The software also gives you the option to remap your keyboard shortcuts.

Third, installing. Setup is very easy. Install the software and at the very end, give PFixer permissions in your OS (there are prompts for this). Then, turn on the PFixer Panel and open Lightroom. As soon as you select the “Develop” module, the syncing will start automatically. You must leave the computer alone while it is syncing up, otherwise it will not initialize correctly. If this does occur, select “Reinitialize Bindings” from the dropdown menu and it will fix itself. The entire sync process takes about 10 seconds.

Now let’s take a look at what the Panel can do. There are eight motorized sliders that change automatically depending on the image. There are several settings on the board that can be easily navigated through. Each is labeled on the panel by color. “Basic” is bold and white. “Editing” is yellow. “Culling” is small and white. Switching between modes is done by pressing one of the corresponding buttons at the top. There are also buttons for left right, undo, previous, etc. 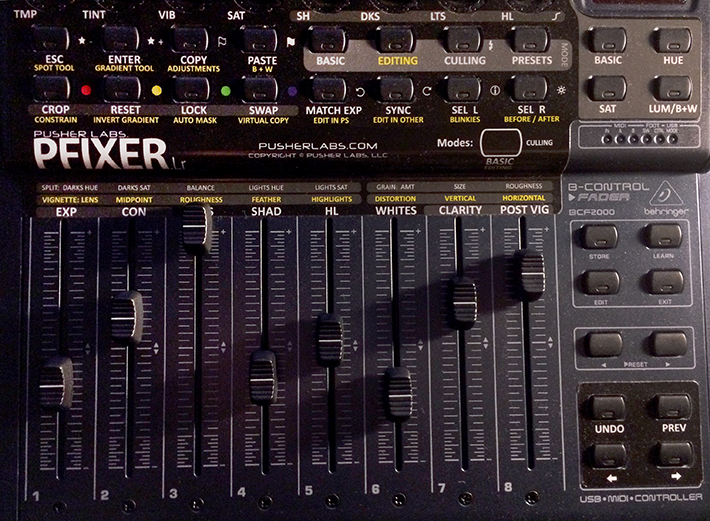 On basic, sliders control exposure, contrast, blacks, shadows, highlights, whites, clarity and post vignette. I found the last one a little out of place for my personal workflow, but to be fair, I hadn’t even used that slider on my board. Across the top, we have dials for temperature, tint, vibrance, saturation, shadows, darks, lights and highlights. There are more buttons and configurations than I would ever use, but I do appreciate that they are there. They jam packed as much of Lightroom as possible into this board (over 200 functions). There are buttons for copy, paste, reset, match exposure, sync, edit in Photoshop, convert to black and white and a lot more. Some of the more frequently used buttons were a little awkward to get to for me personally, but luckily the software allows the board to be completely customizable.

In the newest version of the software, Pusher Labs has added gesture support to the Trackpad. The feature is still very new, so it isn’t customizable. At this stage, it’s something of an “undocumented perk.” Swipe to the left or right to go to the next image, or use the Trackpad like faders. Using the two-finger scroll, each section of the Trackpad corresponds to different effects. With Lightoom open and PFixer running, hold down the Fn key and you can adjust any of the following: 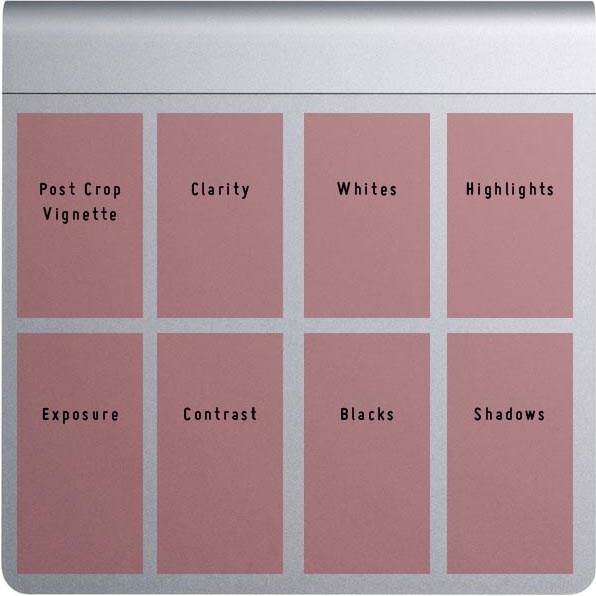 If you single click in any of these areas, can apply these adjustments.

I have also been informed that Pusher Labs is in development of a free layout for the TouchOSC app that turns your IPad into an additional MIDI controller. Once it’s released in the very near future, it will look something like this: 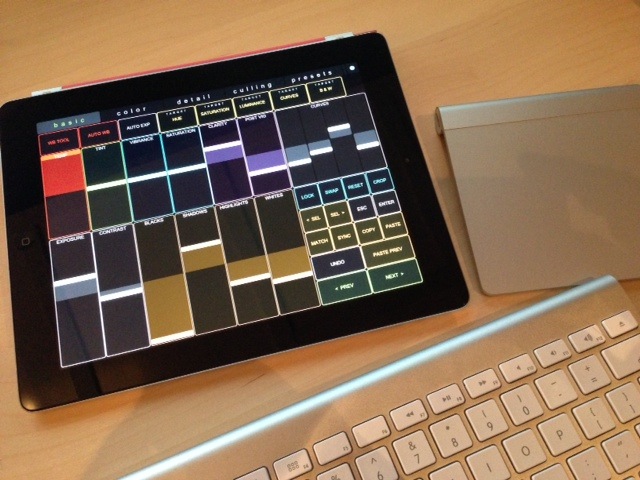 As it stands, PFixer and the Panel by themselves are the best bang for your buck when it comes to this kind of an interface. Adding in the Trackpad option as well as the IPad, I don’t know of anything else that offers this amount of customization and versatility.

Conclusion:
Why, oh why didn’t I discover this earlier? It is immeasurable how much easier processing has become with the PFixer Panel. After the first couple of images I was almost confused. It couldn’t be this easy….could it? The more I processed, the more I reveled in disbelief. To put it in some kind of perspective, I processed over 2500 images on it in three days – each one individually. PFixer (and the Panel) is easily the most excited I’ve been about a product in years. Well done, Pusher Labs.

This needs to be an iPad app.

Try this for the iPad : http://www.lrpad.com

But alas no UK distribution... This could be something that would speed my workflow up.

Just go to ebay and find a Behringer BCF-2000. (you can probably find them used at a music store).

Sold out :( And any love for Canada?

Ian, unfortunately Pusher Labs doesn't have distribution rights outside of the US for Behringer products. You can always source a BCF-2000 locally (or Amazon) and buy the Overlay along with the software which will get you the exact same thing.

Ian, in Canada you can go through Long &amp; McQuade - 4 new in the country when I checked, and a few used. I'm sure other music shops have them, and since the guy I talked with at L&amp;M was a photographer I showed him the application as well - he was excited.

WOW THAT IS AMAZEBALLS!!!!

If this was also on Windows, I would purchase this as a Holiday gift to myself.

I will never again buy a hardware customizer like this.

I was an early adopter of the x-keys keypad (a small customizable key pad). Everything was great. My workflow sped up once I learned it, and I was hooked. Then I was robbed and had to use my personal laptop until I could replace everything. I was paralyzed. My workflow ground to a stop. I had no idea what my keyboard shortcuts were. I couldn't find palettes or menus in PS. I felt like someone had tied my hands. It sucked. I promised myself from that point on, I would never do that again. Since then, I have found it much more useful to keep in practice with a "normal" set up (qwerty keyboard, mouse, small graphics tablet) to be able to work on multiple computers around the world and other people's workstations (especially now with Adobe CC).

I just thought I would share my story for anyone thinking of dipping into this kind of thing.

That's a bummer you were robbed Jim. You can always use PFixer as a software-only solution and customize it to the way you like it. You could even save your favorite layout up in Dropbox so you have it anywhere you go and download the software anywhere you are in the world.

That is good to know, Ben.

Actually, I would call it professional problems. This affected my ability to get my work done in an efficient and profitable way.

But, yes, my life could be a lot worse.

what program did you use, paddy or pusher labs pfixer?

Do the sliders recall based on the photo settings? Say you make changes to one photo and switch to another photo, do the sliders move to the relative settings?

And it's a little freaky at first. But you get used to it rather quickly.

On an unrelated topic, what's this this damn beam advert.. anybody else find it "a little" intrusive? I mean I don't mind ads, fstoppers has to make their money somehow... but isn't this a bit extreme?

Beam me up Scotty!

Somehow this contraption reminds me of Linux + a free Office solution. If it's so great ... why then isn't it much more prevailing ?
The PFixer makes this question even more pressing because of the fact that professionals don't care that much about costs when productivity is increase by leaps and bounds.
However ... I've yet to see a pro photographer who makes use of this device.

That's because it is a NEW device that has been flying under the radar. I have tried it myself once, and ERMERGERD. Once you get your hands on it, you don't want to let go.
I am actually SERIOUSLY considering buying a Mac (I'm a PC girl myself) JUST got this. Not. Even. Kidding.

Maybe late to the party but if you work with Windows, buy a Behringer BCF 2000

and download Paddy (actually, Paddy works with other MIDI devices but this and the BCR 2000 were the recommended ones. The software is donationware and requires a small donation to activate it but the minimum donation required is less than a buck.

I'm a musician and a pro photographer and this device is something I'm very familiar with. workflow has gotten much faster which mean a lot of saved time (and $$).

a tablet can only control one parameter at a time. with this, you can technically control up to ten parameters at one time.

This needs to be available also for Windows!

Has any of you tried ShuttlePRO V2? Worth taking a look.

I own a ShuttlePRO V2 and I use it, ofc, for video editing. I'll try to play with it in LR, but I think that the main disadvantage will be to operate on a single setting at once