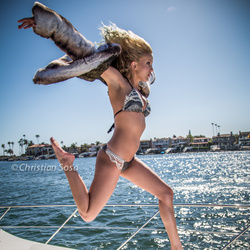 While I had always been the kid with a camera on all events at school many years ago, I actually ended up on a path through Electronics engineering and computer science, which landed me pretty well paying gigs in IT.

Somewhere around 2004, armed with a Canon Digital Rebel (Canon's first consumer DSLR), I began taking headshots of friends, which eventually led to taking pictures of everything and anything worthy of being captured artistically. As time went on, so did my know-how in properly operating a digital camera.

With an increased knowledge in being a bona fide photographer, I found my way onto Craigslist, eventually taking pictures ranging from jewelry, shoes, and calendars featuring models. This experience ultimately landed me a position as an “Apple Technician” for the famous Samy’s camera on Fairfax, in Los Angeles, California where my passion for photography became solidified by interacting with more experienced peers.

In an effort to further expand my career, I ended up at Fox Studios. It was here where video cameras would become a part of my repertoire. My exposure to “video cameras’ at the Fox Studios in the end enabled me to record footage in 4k (i.e., cinema quality) and edit projects utilizing iMovie, Final Cut Pro X, and Adobe Premier CS6. Ultimately, the occasion and complexity of an event or project dictates the type of camera and editing software to optimally capture memories or an audience.