Sony cameras are well known for standing at the forefront of technological innovation, offering top-notch image quality and class-leading features. What were their cameras like when they first started, though? This fun video review takes a look at the company's first digital camera, the DSC-F1, and what it is like 25 years later.

Coming to you from Dino Bytes by Gordon Laing, this neat video review takes a look at the Sony DSC-F1, the company's first digital camera. First released in 1996, the DSC-F1 was priced at $849 (about $1,436 today). The DSC-F1 came with a 1/3″ CCD sensor with a resolution of 640 by 480 pixels (0.3 megapixels for those keeping track). Paired with that was a lens that rotated 180 degrees and offered a maximum aperture of f/2.0. The electronic shutter offered speeds between 1/30 and 1/1,000 of a second, 4 MB of internal memory, and an infrared transceiver that could send images directly to the DPP-M55 color printer. While the DSC-F1 was quite impressive in 1996, it is amazing to think what $1,400 can get you in a camera nowadays, and it really highlights just how quickly technology advances. Still, it's a fun trip down nostalgia lane for any of us who remember using early digital cameras. Check out the video above for the full rundown from Laing. 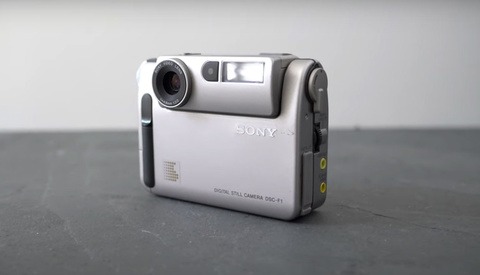 Mastering Macro Photography The Complete Shooting and Editing Tutorial
With Andres Moline
$299.99
$209.99
Log in or register to post comments