A wedding photographer returned home to make a grim discovery: the images from the wedding she had just spent the day shooting had two lines running throughout them. Upon doing some research, she found the lasers from the dance floor lighting had caused the damage, meaning she had to spend hours removing the lines in Photoshop and buy a new sensor.

Brittany Bay, who runs Bay Productions in Dallas, Texas, had had a successful day shooting a wedding. But towards the end of the day, she reveals in a Facebook post, she noticed two prominent lines that she was previously unfamiliar with. Hoping it was simply an issue with her LCD screen, she was frustrated to return home and find the all of the images were displaying the same issue.

She has now released an image from the wedding in question, adding arrows to illustrate where the lines across the picture. In her post, she also linked to this article which better explains how and why it happens.

In future, Bay says she will “absolutely NOT” take pictures at wedding receptions that have lasers, although luckily, it’s something she says she rarely encounters. A replacement sensor is costing her around $1,000, not to mention the many hours she has had to spend removing the lines manually in Photoshop. Ouch!

If you want to learn more about wedding photography, be sure to check out our very own tutorial, "How To Become A Professional Commercial Wedding Photographer."

Give me a break

Well, usually, this is at the end of the day, so not sure how many pictures she had to fix.
But she should have noticed right away it was not the screen as a simple zoom in was enough to see the line was within the pictures.
-> No knowledge about laser and sensor
-> No knowledge about checking possible issue with capture pictures (!?)
and I have guessed;
-> Not spare body to switch to when she noticed the defective pixel line.
.
Sorry for her...

A note to all of the photographers who claim they don't chimp or who think that chimping is bad: you should be chimping. A lot. Chimp in detail. Chimp in depth. Discover defects early. Etc. If problems show up later, at your computer, everybody says: why the heck didn't you chimp!?

I agree with you so much that I actually made an account to reply to you. You should never ignore a potentially useful tool just for appearance's sake. I hadn't heard the term "chimping" before; I guess the term makes sense, sadly, considering the rather competitive nature that some photographer's seem to have. I've seen some crazy arguments happen over the littlest things.

She did chimp, she did saw a problem, but did not understand how a picture is displayed in her camera.🙈🙈🙈
So Chimp or not Chimp was not the issue there.
.
TOP DEFINITION
chimp
To review an image on the LCD screen of a digital camera after taking a photograph. In common usage among press photographers. The act was dubbed chimping after photographers were caught making monkey-like noises when they reviewed a good shot in their cameras.

You're saying she should have chimped much more thoroughly. That is, chimp while zooming in to examine specific defects in the image. That's ultra-chimping, which is even better than chimping. Of course, not chimping at all would be an issue for sure. Not chimping means you see nothing until images are on your computer. Lots of photo forum experts advocate not chimping, or take pride in their (supposed) not chimping, or look down upon others who chimp. My point is: chimping can save the day. And ultra-chimping even more so! Anti-chimpers take note.

"Hoping it was simply an issue with her LCD screen"
I'm impress how little she knows about using her own camera.

If she was to play one picture and zoom in or out; she will clearly see the line zooming with the picture showing the screen was not to blame but the sensor/image itself.

I doubt it's the LCD, for starters she edited the pictures I'm pretty sure the lines wouldn't have shown up on her computer screen if it was the camera's screen, and if it was her computer's screen having a line of dead pixels that would be obvious pretty quickly.

So we have to take the warning as intended. Be careful around lasers, because they might damage your sensor.

they damage eyes.. id figure the same for sensors in some degree.. but what kind of lasers since people at concerts and such shoot lasershows as well ;)

The damage occurs when the laser beam hits the lens directly or reflected off of a highly reflective, flat surface. The lense intensifies the light and it shorts out a pixel. Since pixels are addressed by row and column, the entire row and column corresponding to the pixel no longer work. Have read of this happening at laser light shows before. Only takes an instant and the sensor is toast.

Don’t be Rollei Joe, Just Me. 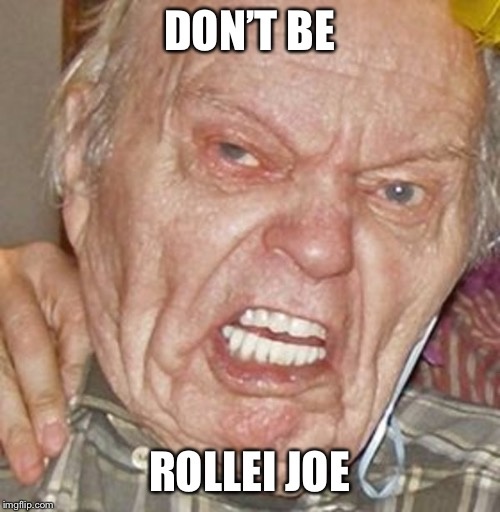 What is the point of this?

Rollei Joe is a person who embodies the elitist attitude in the photography industry.

"For those that do know, a chance to engage in self-proclaimed superiority" - that says it perfectly.

Oops. I didn't know. I must be an idiot.

I didn't know either, or really just never thought about it. Failure of imagination I guess.

Unlucky DSLR shot, or a negative of mirror-less?

I would expect it depends on sensor really, but since on a mirrorless your sensor is constantly recording the scene that gives it much more chances to catch an unlucky LASER glimpse. On the other hand, you could argue it protects your eyes, which would be hit by the LASER going over the mirror and pentaprism if you were using a SLR (but we should hope such LASER are harmless to the eyes in the first place).

They are all dangerous to the eyes if the retina is hit directly.

That is false. They go through great lengths making sure the lasers are at a power that doesn’t hurt the eyes even if hits directly on the retina. There is a time constant for different types of lasers (wavelengths and powers) that determines what is harmful for the eyes. Usually, for these types of laser shows they don’t harm the eye due to the aversion response (blinking). Now if someone were to stare into the laser, yes that could cause some damage.

Sensor are different, of course.

I don't know who your "they" is or which lasers you're specifically talking about, but I have a host of common lasers for such things as carpentry levels and gun sights. They all carry danger warnings, and I've known of people who have injured their eyes with them. Obviously, a laser is radiation and all radiation damage is a matter of accumulation over time, but with any laser, that time can be pretty brief. There are also numerous reports of pilots suffering eye damage from even brief interceptions with consumer-powered lasers on the ground. If you know of a consumer laser advertised as not dangerous to vision, I'd be interested in a link.

This is going to get worse. "self driving" cars (as well as some automated safety features) are starting to use lasers. These beams take hundreds or even thousands of measurements per second. (recently after a camera was ruined by a car on exhibition at an auto show, the manufacturer replaced the photographer's camera)

It's easy to see lasers on a dance floor but in broad daylight, you can't. And since you have no idea where the next flash is coming from, there's nothing practical you can do to avoid it. This will be everywhere once these cars become more common as well as lidar for all sorts of other applicatons. Even if not directly destructive to your eye (I have trouble believing that, but cameras are known to be vullnerable), thousands of laser devices in use in public areas will certainly take a toll on cameras.

Super Easy Fix....send the photos to India...cost u a buck per picture(at most). You'll get them back in about 24hrs. If she actually retouched these herself....she must have time to waste.

Hours photoshopping? How about dust delete data?? That's about 5 seconds.

Or maybe - if it is just one or two distinct rows or columns of pixels, just kill the whole row/column (e.g. by cutting & pasting the lower part 2 pixels up). As they should appear in each shot at the same position, you might be able to automate the whole process.