There are two ways to photography: registration and creation. Let me be clear that, before we get into a short essay about self-acceptance in art, neither is better than the other. While I’d like to teach you today about conscious creation, registration is the inherent nature of photography. But the way we modify and modulate light before it hits the sensor, as well as the entire process after it, is all up to us and not the camera manufacturer.

Shortly after wrapping up a lecture on the creation of photographic art in the Dutch local landscape, I got into an interesting conversation about the nature of photography. One of the photographers in the crowd was positively lyrical about how his camera captured a certain subject. A spider had spun a web that glittered brilliantly in the soft morning light. As he fastened his tripod and waited a pre-calculated 1/30th of a second for the exposure to complete, he wondered what the picture would look like. And he was blown away by the miniature world that appeared on the screen. It’s the way the magenta tones popped and how the light, coming from the top right of the frame, bounced off the spider’s web to diffract in every color of the rainbow. It wasn't until a lonesome drive home at night when I realized that his story about the photo didn't contain a single mention of conscious creation apart from the fastening of his tripod...

Of course I can’t stress enough that there is nothing wrong with the man’s picture. In fact, judging by the image’s merits, it might well be one of the moodiest macro photos I’ve imagined. I just found it interesting that anyone can be amazed about what appears on the screen after exposure. Art, in a strict sense, can simply not exist without conscious creation. Like some sort of beautiful apparition, the magically appearing photograph is the discovery of your camera's capabilities but not your own.

In order to call something art, a human needs to actively create. Art isn’t a picture that appears on a screen on the back of a camera. Art is, by its very definition, created by a human cognitive process. It doesn't really matter whether or not a certain amount of effort was involved in its creation, as long as it is made through human thought processes and by human hands and actions.

To be called an artist, let’s say a creator of art, Merriam Webster’s dictionary further requires us to be skillful or knowledgeable about a subject. To those who are talented or gifted photographers, creating images that are appealing to others can be relatively easy, while others struggle to translate anything they see in the 3D world to a two-dimensional photo. It is here where both skill and a certain mindset play important parts.

"Leviathan" - A moody morning in the forest set the stage to a forest photography workshop this autumn.

During one of my workshops in the forest this autumn, a student walked up to me saying: “I don’t see it (any art in the forest). All I see are heaps of deadwood and stripes of trees.” Everything we see is passing through a filter in the back of our minds (it’s actually the thalamus in the center of our brain, but so goes the expression). That filter is made from everything we have ever learned about what is important to notice and what is not. It helps us to navigate the physical world without getting an information overload about things that do not matter at a given time. The thalamus prevents us from paying attention to trivial details and in doing so, prevents us from getting hurt. Thus, at least according to some scholars, attention is the by-product of this organ in the central brain.

The potential of seeing art in any given landscape is raised by accepting this filter, rather than trying to disable it. Remember the student in the forest? “All I see are heaps of deadwood and stripes of trees”. I told her to pay more attention to what you do see, without trying to emulate the forest scenes of others. I guided her to photographing exactly what she described instead of pointing her in the other direction where the best part of the group was shooting.

"Twilight of the Gods" © Isabella Tabacchi

To be perfectly honest, my own thalamus (brain filter) can be a pain in the butt sometimes. I always see the world through some fantasy created by others. For example, I can’t help the affection I feel for 19th century German landscape painters. And I’m deeply inspired by both the cinematography of the Lord of the Rings and the collectible card game Magic the Gathering. Because of this, I’m always looking through the viewfinder as if I’m on the hunt for those mystical fantasy scenes. It was a frustrating period with years of futile attempts to break down the filter. At last, I gave in — I would always be limited within those worlds created by others; standing on the shoulders of giants. At one point, I just created my own fantasy world in my attempts to remedy that. Complete with my own creatures, mythology and even cinematography for post-processing purposes. And it helped tremendously, because now I have the freedom to create something that’s truly something of my own, without doing away with the fantasy filter. Award-winning Italian landscape photographer Isabella Tabacchi is another fine-art type of photographer with a keen sense of capturing a bit of herself through photography. Most of the photos that accompany this article are hers.

Somehow, you can be more at peace with yourself through acceptance than through fighting battles against yourself. To relate it back to photography; there’s less trying and more noticing. Ask yourself: What is it that’s caught my eye? And more importantly: Why would you pay attention to it? Is it the texture, color or shape? Once you’ve established the thing you notice, it’s up to you how you would like to portray that through photography. Minimize, dramatize or abstract — There are libraries full of books on the “rules” of creating art and interesting approaches to photography, but I have yet to come across a book that teaches you to be your own photographer and draw inspiration from what you already see.

"Running Away from the Horizon" © Isabella Tabacchi

If you do want a good book that covers most of the points in this short article, I suggest giving “More than a Rock” by Guy Tal a thorough read. Tal’s photographic and philosophical journey through the Colorado Plateau is as enlightening as it is touching. What I really like about his essays though, is the way Tal relates to photographers and drills down to the core of our being by means of careful chosen wording and years of experience in the field.

Anyway, I hope you enjoyed reading this and I’d love to learn if you know of any more books or authors that teach about finding your own path as a photographer. Let us know in the comments.

Images used with permission of the talented Isabella Tabacchi. Check out her website for more stunning work.

Phenomenal photos and the kind I wish I could make. I try but...

There are ways to get around your geographic limitations but I still can't quite get that look. 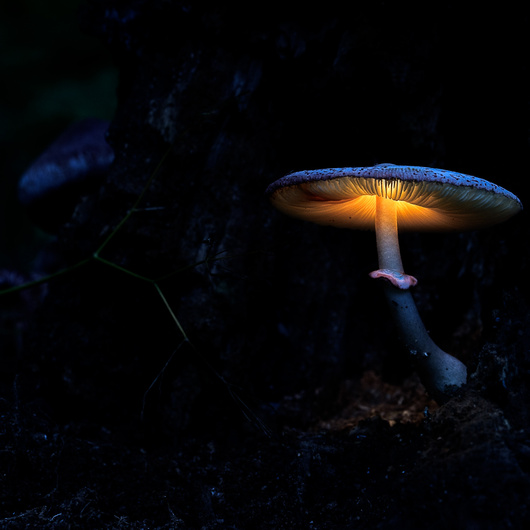 It is my photo. I was going to mention the methodology but forgot. I read how to do it in this article (you may recognize the author :-) ): https://fstoppers.com/education/those-glowing-mushrooms-part-1-6-steps-p...

Good article, Daniel, love this type of content. And thanks for introducing me to such a creative photographer.

Great article - I totally agree with you that art is about creating and deliver something of you in that piece of art.

I found a lot of inspiration reading this book Moodscapes” by Rebekka Gudleifsdottir.
It touches into my way of creating.

Your point is well taken. The photo of the spider you referenced, can't, however, by your given definition, be discounted as "art". Some thought was given to its creation... It seems a matter of degree rather than an absolute.

Nice article,
For me Art is more related to unconscious than with conscious.
When I put to much thoughts while photographing I tend to have results that don't reflect myself.
I see art as a expression and a artist is someone who have knowledge, tecnic, tools etc... To express themselves in the best way, so the others are able to feel the art and connect with the artist in someway.
If I'm to conscious I feel that every thing become very mechanic very square without soul.

Hi Daniel! Great article!!! Thanks very much for sharing my website and my works! :)