Could You Shoot Street Photography at 400mm?

Most street photographers prefer to use a lens around 24mm or 35mm for their work, rarely opting for telephoto options, let alone ultra-long supertelephotos. But that does not mean you can't take great photos with a long lens, and this fun video follows a photographer as he shoots street images with a 400mm lens.

Coming to you from Pierre T. Lambert, this neat video follows him as he shoots street photos using a 400mm lens. Most street photography is taken with lenses around 24mm or 35mm, but as Lambert shows us, you can create fantastic images with other focal lengths as well. One thing I think is important to note is that Lambert does not try to mimic or replace standard looks taken with the normal lenses with the 400mm, especially since this would be particularly difficult given all the activity in a city. Rather, he embraces the qualities and characteristics of the focal length and uses them to create images that leverage its advantages. For example, the telephoto compression allows him to bring elements of the frame closer together, really bringing out the denseness and business of the city. He is able to create some really great photos; check out the video above to see his experience.

Opinion / August 29, 2019
In Your Face: When Street Photography Gets Too Close

It does allow some unique shots you couldn't get otherwise, but I feel like overall it's just way too limiting in the confines of a city. On a side note, some of the stuff this guy does is so ridiculously unsafe that I'm a bit surprised how often you guys are giving him exposure when plenty of urbex guys and rooftoppers have gotten shit in the past. This guy was literally riding a bike with no hands while taking photos in the middle of an active street while eventually crossing over into another lane because he wasn't steering (15:22-15:41)... I'm all for street photography, but you don't have to take dumb risks while doing it.

I don't walk around my home with the camera unless it's on a strap around my neck. If I were the lens rental company, I'd refuse to rent equipment used like this.

I'm sure it's a paparazzi dream lens.

I live in a historic village in Taiwan. I'm always finding new things to shoot. On weekends, I'll grab my camera, one lens (so I can't swap out) and make a day of it. I have12-600mm covered with a variety of zooms and primes. The longer lenses are harder to shoot in an urban environment, but each lens adds a unique perspective on everything. And not having the appropriate lens for the moment makes you think outside the box.

I shoot the streets and subways of New York City, and my go-to lens is a 28-300mm. Weighs a ton, but its versatility is perfect.

That sounds versatile as hell. Nice. :)

Let’s get this straight, street photography just isn’t any photography taken on the street or in a public place. Street photography is very much about being inside the moment, rather than being on the outside looking in. That’s why anything over 50mm is generally more voyeuristic than part of a moment. You’re not going to find any of the street masters, past or present, shooting longer than 50mm.

And asking if you can shoot street Photography on a 400mm lens is no different than suggesting you compete in the Tour De France on a motorcycle. It’s just ridiculous.

Thanks for the clarification. Just so that I understand the rules, is the 50 mm maximum requirement based on full-frame, or are crop-frame shooters allowed to go to 50 mm, as well? I want to make sure that I don't go outside of the boundaries. Art does have strict rules. (I think it was Jackson Pollock who said that).

Apropos of nothing, in the earlier Baroque period, when much of the orchestral music was done under the patronage of the church, the "orchestral masters" deemed it improper for music to be in any time signature other than 3/4. Common time, in particular was considered to be unacceptable because the symmetry of it was considered to be an alluring trap of the forces of the devil. As JS Bach grew in his musical sophistication, he found 3 time to be too limiting, so he began writing in common time, much to the consternation of the church, which considered it not proper music and they threatened to excommunicate him.

Since then, the great majority of music is in a time signature other than 3/4 time. One might argue that there has been some music that can be considered "seminal" that has been written in the past 300 years. And in fact, some of the composers (Mozart, Beethoven, Chopin, Stravinsky, Ellington, Coltrane, Lennon, etc) might be considered to be masters, past or present.

That was a parable about strict definitions of art genres.

PS W. Eugene Smith used telephoto lenses at times. One could argue that his Pittsburgh Project gives him cred as one of the street masters.

I was with you until you put Lennon in the company of Chopin and Mozart. :/ Let's not get carried away now.

I was trying to be deferential to fans of more recent music. Figured Lennon would be more recognizable than John McLaughlin and Pat Metheny. : ) Although, were Mozart and Chopin around in the 1960's, I am guessing they would be prog rockers. They had the hair and lifestyle for it. 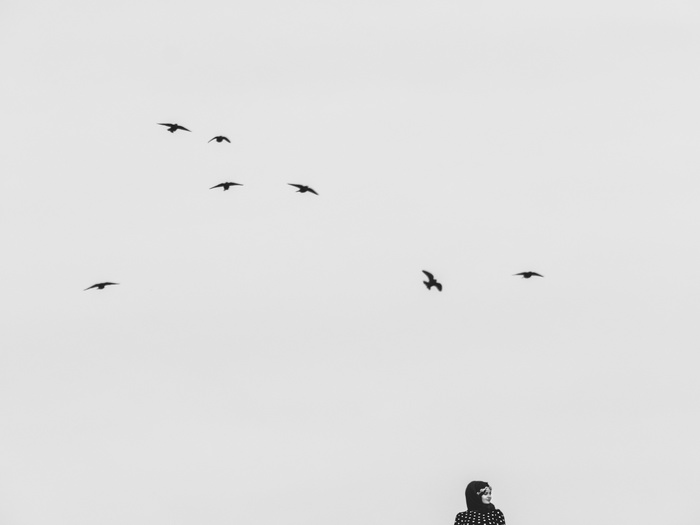 A great and brave composition! Congratulations!

So many people get so stuck on things like effective focal length of a taking lens. Should not photography be about the beauty of the final image?

Some people enjoy the challenge of proving that a beautiful final image can be created with unconventional equipment.

Ah, not him again. After watching a few minutes I knew, this guy was here at FS already. Why would I know? Well, back then he did the same. Instead on being on his feet, he uses a bike this time. He just points and shoots. Nothing is more boring than this. Below, Darren made another point: This is not street photography, it is just photography in the streets.
Edit: You guys at FS are really onto him, aren't you? https://fstoppers.com/search?k=Pierre T. Lambert &t=articles