Have you ever come back to a piece of work that you know almost like the back of your hand and yet, you're still surprised by its depth? You see something new, something inspiring?

Cinema Tyler's YouTube channel is full of insights into some of the best films ever made. If you haven't, now is the time to catch up.

Tyler usually focuses on a single film at a time, creating a series of in-depth essays on varying parts of the craft. His first set of videos, entitled "What I Learned From Watching..." picks a film and discusses the lessons that it can teach aspiring filmmakers. Each set since then has had something of a teachable moment at its heart.

Tyler is currently focusing on one of my favorite films, "Apocalypse Now." In particular, this latest essay focuses on Martin Sheen's Willard in his hotel room at the beginning of the movie. I've spent a decent amount of my life reading about and engaging the film and its source material. I didn't think that there'd be any surprises left for me.

However, while watching Tyler's most recent essay, the ideas of commitment and intention hit me like they haven't before.

Listening to Tyler talk about the cinematographer's (Vittorio Storaro) use of lighting is inspiring. Instead of just creating a world that looks pretty, Storaro took his time to craft an aesthetic that also helps tell Coppola's story. Films that are pretty but vapid are all the rage today. If something looks pretty, it's deemed deep and intellectual, even if there is nothing much behind it. Instead, I like my pretty with a heavy dose of intention. If you're going to tell a story about duality, about hearts of darkness existing in the same man as civilization, hang a set of horizontal blinds. Give me some cage-like lighting, let light creep in, make it look like warpaint, but keep it confined by surrounding it with dark corners. Make your pretty mean something. Act, like Storaro, with intention. Blend your technical with the spiritual.

Although the stories behind Sheen's drunken hotel scene are legendary, the way that Tyler has put it all together here is a testament to Sheen's and Coppola's commitment to their craft.

Sheen's interview in particular is eye-opening:

Please, I must do this for myself.

We all know that Sheen accidentally cut himself during shooting and that he begged Coppola to keep rolling. But, the interview segments from decades later shows exactly what that moment cost Sheen. He admits that for years he pretended he didn't remember, but by the time of the interview, he admits that it was just hard for him to see himself as vulnerable and fragile as he was on screen. He jokes about the scar he still has on his hand, but you can't help but understand that he probably still has a scar on his psyche.

To create a piece of work that comes at such a high cost illustrates the sense of commitment that is often needed to push boundaries and truly create a work of art that can stretch across generations.

Education / May 16, 2020
A Beginners Guide to Parallax and How to Avoid It When Shooting Panoramas

My sisters next door neighbor was the set director for Apocalypse Now (and the Godfather). Here is his original copy of the screenplay used on set. 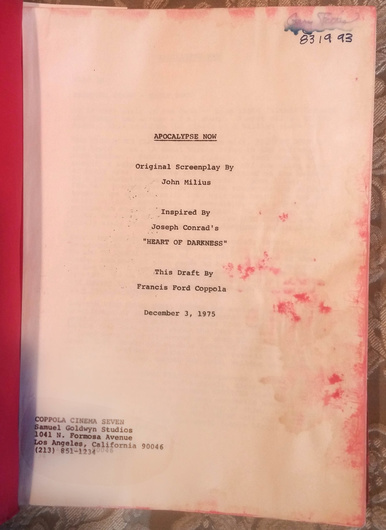 Wow! Quite the treasure. I'm sure there are so many stories to tell.

The cinematography is brilliant. It's difficult to stylize something that has a lot of day exterior work like this film does, but Storaro came up with a visual design that allowed him to structure the images in a way that supports the story. He decided that the main conflict of the film and the war was between two cultures, and to parallel that, he made the photography be about the conflict between "artificial energies" (the U.S. military) and "natural energies" (the Vietnamese), so whenever he could, he brought in electrical lighting into the army scenes at night so that the army felt like a visual intrusion on the landscape -- best seen in the Playboy Bunny sequence (with a brief view of a fire burning in the distance as Vietnamese watch from behind a fence) but also the in Kilgore BBQ party around the helicopters. In contrast, the further upriver they go, the more you have natural light effects like twilight, firelight, etc.

Love this comment. And, if I may go a bit further, the bridge sequence, after which it's a lot of trouble, the artificial light slowly but surely loses to the darkness. Even with a flickering death rattle.
Great read. Love it!

I’ll revisit the film and pay attention to your insights