Canon's New CMOS Sensor Can See In The Dark

Canon has given us a look at their recent prototype that makes progress on low light performance. To say it's sensitive in low light is an understatement. Take a look at the couple of sample images they've released along with their sample video, showing how great it captures the night sky. It's quite remarkable to say the least.

Although it's just a prototype, it gives us such a clear look into the future. You can see a great video demonstrating the sensor here: Link 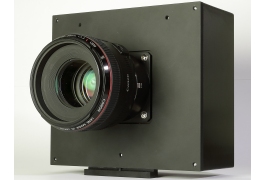 So what are the technical details behind the sensor that allow for such performance? Here is a part of their press release which talks a little more about it:

The newly developed CMOS sensor features pixels measuring 19 microns square in size, which is more than 7.5-times the surface area of the pixels on the CMOS sensor incorporated in Canon's top-of-the-line EOS-1D X and other digital SLR cameras. In addition, the sensor's pixels and readout circuitry employ new technologies that reduce noise, which tends to increase as pixel size increases. Thanks to these technologies, the sensor facilitates the shooting of clearly visible video images even in dimly lit environments with as little as 0.03 lux of illumination, or approximately the brightness of a crescent moon—a level of brightness in which it is difficult for the naked eye to perceive objects. When recording video of astral bodies, while an electron-multiplying CCD,*2 which realizes approximately the same level of perception as the naked eye, can capture magnitude-6 stars, Canon's newly developed CMOS sensor is capable of recording faint stars with a magnitude of 8.5 and above.*3

To see their full press release, you can go here: http://www.canon.com/news/2013/mar04e.html

[Via Cnet via Andrew Coutts]

Gear / October 16, 2020
Is Canon's New Camera Nothing More Than a Firmware Upgrade?

well the text does not explain at all how it works.

Really? it's a prototype.

Canon won't give out the recipe to success for free...

The text does explains how it works...to a point. The pixels are much much larger, it's a 35mm sensor with only a resolution of 1920x1080 - video only. This means the pixels are HUGE compared to your full-frame stills camera. with regards to ISO - software might well be enhancing the image but the sensor itself seems to be doing most of the work.

This sucker would really come into its own aboard the ISS.

Of all the things to complain about... there's always something, isn't there...

If they don't hurry up, I won't hesitate to go back to Nikon again :)

You likely won't be able to afford this. No offense meant.

This is exciting. Wish more info was given like ISO settings shots were taken at.

Possibly highly significant that their sample subject is essentially black and white. Color rendition needs to be seen to see how useful this sensor actually is.

Also, the stars look like very small trails rather than dots, implying a long exposure rather than an exposure time  of the order of a single video frame.

Go to the site linked in the article: http://www.canon.com/news/2013/mar04e.html

My Iphone cant do that...yet

If that's true, that is truly amazing — I've come so far in photography, image the next 20 years.

With ultra high def tvs starting to surface and cameras shooting in video raw at 4K...why would a sensor with 1080 lines of resolution kick off?