'Dronie' The Ultimate Drone Selfie - Can This Be Topped?

A few weeks back I attended the 3rd annual New York City Drone Film Festival. I did write an article about the winners of it, but at the time could not find this video anywhere! The Dronie is essentially a selfie with a drone and in this case a video where that is being taken to the next level. I thought this was one of the more "odd" categories but was glad to see it was one of the winners. Florian Fischer is currently undefeated in this category for the NYC Drone Film Festival but will anybody be able to top his dronie at the next Film Festival?

Florian was flying a DJI Phantom 2, but it looks like he swapped the control and added a few gadgets to boost the range. I am unsure how to go about doing something like that with the controller, but it was cool to see the control he had flying in one straight line as far away as he did and go through a house. My question is how many tries did this take him? Did he fly forwards or backwards? and did his family know that he was doing this? All in all, definitely a weird category for the NYC Drone Film Festival, but because of Florian, this category has been able to stay alive and has yet to be topped. Is there anyone else out there who can out-do to dronie master as he holds this three year title? 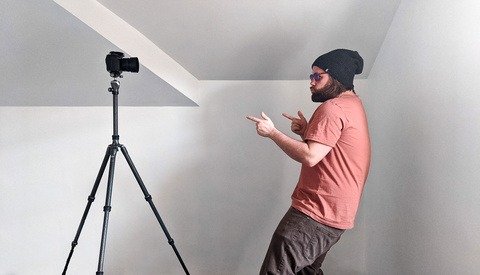 so did he fly the drone both ways or just reverse the video? sweet house though.

He flew the drone away from himself and then reversed the footage coming back, you can tell by the waves as he passes over the beach.

Any number of sports drone operators that regularly uses drones at high altitudes in the mountains could probably outdo this, but they're not filming themselves.

It doesn't matter which direction he actually flew it....that is great control!