Nano-Drones Are the Perfect Tool to Create Original Videos

Nano-drones are usually designed as indoor toys but they can be used to create some very unique shots.

Thanks to their small sizes, these tiny quadcopters can fly in very tight spaces and create “impossible” sequences like flying through windows and below chairs. Typically, this type of drone can weight less than an ounce (28 grams) and offers very little flight stabilization and poor video quality. Therefore, making this kind of video requires solid piloting skills and serious post-stabilization work. Another problem is the poor battery life (2-3 minutes), limited stability, and close to zero payload capacity. Therefore, the user must do a little bit of tweaking to install an HD camera on the drone. There is two ways to proceed in order to fit an HD camera on them.

The first solution is to opt for specialized cameras like the RunCam Split Mini that can film in 1080/60 and send the video signal back to the pilot. The file is recorded on a microSD card but unlike dedicated pilot cameras, an HD camera produces latency and the pilot must anticipate the trajectory and obstacle because the video signal sent back on the screen lags behind where the drone really is. That’s what the creator of this video did a few months ago.

The half an ounce RunCam Split Mini can record in HD and stream the video back to the pilot.

The second option is to modify a GoPro by removing all the non-essential parts (casing, battery, screen, etc.) before interfacing the GoPro to the drone for power, and image transmission over the radio link. For instance, the following video was filmed with a stripped GoPro 4 mounted on an Aurora 90 drone. 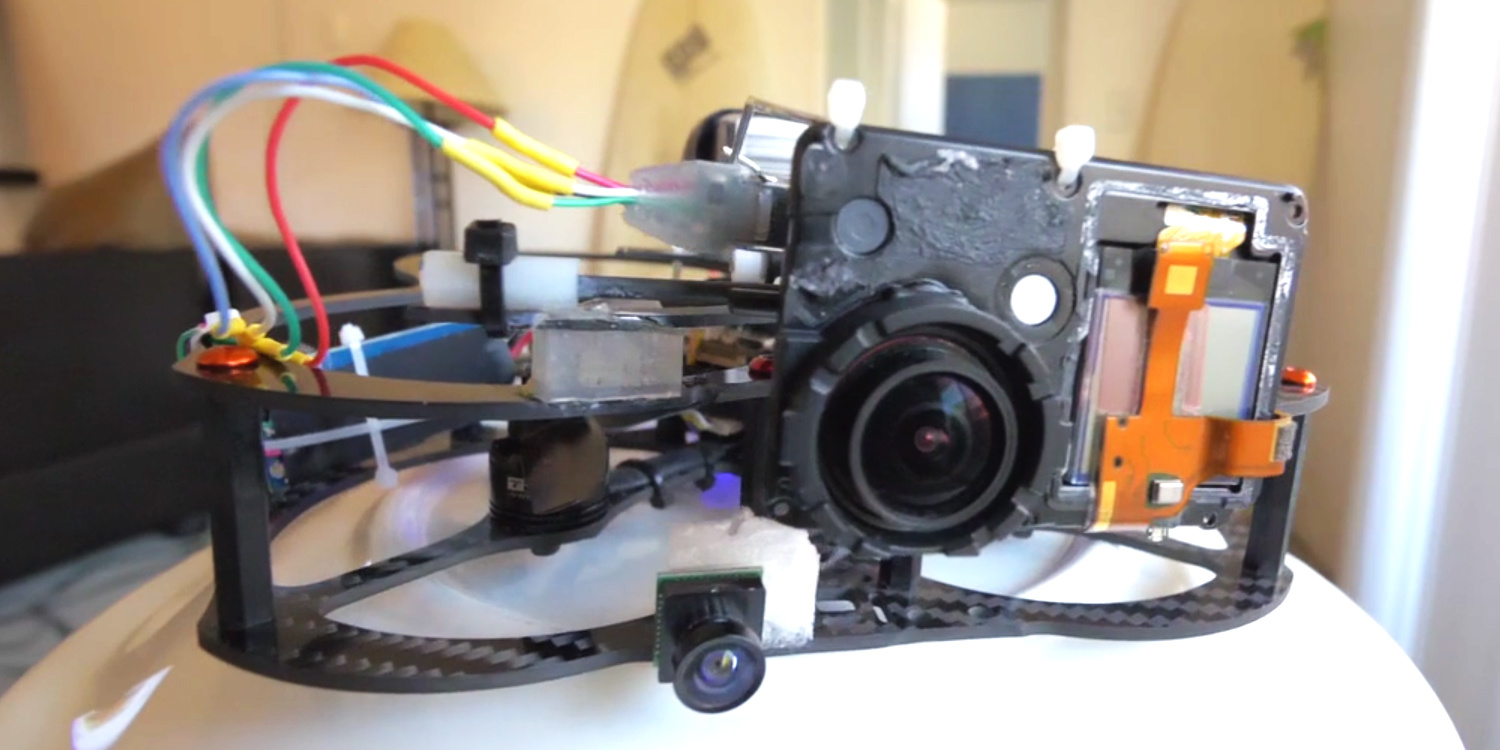 Notice the "naked" GoPro camera. All the non-essential parts are removed to save weight.

Not long ago, the department store Kohl's also used nano-drones to film a short commercial video.

As for the stabilization, the nano-drones are not equipped with gimbal and most of these videos use a plugin called ReelSteady to stabilize the footage with an advanced algorithm and lens distortion presets. However, post-stabilization software only work up to a certain point and the key is to fly smoothly during the take. Here is the “raw” version of the beach video posted previously.

Very recently, Casey Neistat discovered the creative possibilities offered by these little aircraft and made his own production.

Would you like to make your own nano-drone video? The good news is that the hardware is really affordable but there is some technical work to do. Here is what you need:

In any case, you will need play with a screwdriver and solder a few wires. Fortunately, Neistat's drone partner, Droneworks, published a very good video tutorial that shows how to install a GoPro on a Blade Torrent 110 drone.

These videos are pretty awesome. I especially like the Kohls Commercial. It's a really cool sequence for a retail space. But each of these videos are great in their own right. I'm sure these nano drones will have gimbals on them before long

There's so much room for innovation in this space it's mind blowing! I know of some very forward thinking drone innovators on the West Coast https://www.dronestudios.org Check them out!