Stunning Drone Footage from the Most Contaminated Place on Earth

Cinematographer Danny Cooke spent a week with his guide Yevgein, known as the Stalker, exploring Chernobyl and the city of Prypiat, Ukraine. He came back with a haunting and beautiful video which is essentially a time capsule of the city, frozen by a devastating nuclear disaster that occurred nearly 30 years ago. His aerial shots are especially quite stunning.

This video titled "Postcards from Pripyat, Chernobyl" was shot while working for CBS News on a "60 Minutes" television segment about the Chernobyl Exclusion Zone. There have been countless images made of this city, but Cooke’s drone footage offers a unique perspective as it silently drifts through the lifeless city overtaken by trees and decay. The buildings appear as empty shells with the occasional close up of a sign, photograph, or painting that signified the Soviet culture that once existed there.

Their journey through this city, armed with a geiger counter, could have been a dangerous one as it is considered one of the most contaminated places on Earth. It is an eerie feeling knowing that they stood there at all, where without their protective gear it would virtually be a death sentence. One of the final shots of this video, a landscape of gas masks, is possibly the most chilling image of all. It's a reminder of the deadly impact that the accident had on the city's community and the dark legacy that will forever follow the name Chernobyl.

Jason Lau is a photographer from Melbourne Australia, specialising in fashion, portraits and motorcycle photography. He has also been a teacher for about 10 years in the field of Art and Photography. 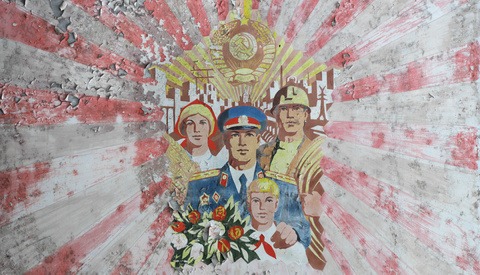 Interview / December 20, 2020
Chernobyl as You Have Never Seen It Before

Great video.
Your comments are wrong though.
They don't wear protective gear (you can clearly see it at the end of the video), and I suppose they aren't dead now.
From http://chernobylgallery.com/chernobyl-disaster/radiation-levels/
"Generally the levels of radiation in Pripyat and the surrounding area, although far higher than the norm, are safe for the time you will be exposed to them (just don’t go licking stuff)."
Sadly, there probably are many places on earth that are more contaminated than Prypiat now.

Fair call Eric. I suppose I should have labeled it as protective devices, like the geiger counter to watch radiation levels, where some areas are worse than others. Thanks for the clarification and the link.

Geiger counters aren't protective gear but only a monitoring device. And without a trained person behind it, it would only scare people to use it (pass it over your phone or a banana and see what it does!).

Wow! Thanks for sharing this! The aerial shots almost looks like CGI just because it's hard to believe haha

What an awesome video!

However, I've got one question: what song is that?

Besides the fake images, one should also be on the alert for fake facts, eg, the number of fatalities mentioned here.