The ongoing protest in Hong Kong attracted more than one million people last week to demand the withdrawal of a highly controversial law that would allow local citizens to be extradited to China. The heated demonstrations were filmed by a local pilot with the help of a micro-drone.

Despite the withdrawal of the extradition bill by the local government, the crowd continue to pressure the political system fearing that mainland China will continue to erode the legal system inherited from the former British colony. After the Umbrella Movement in 2014, Beijing is facing its largest political crisis in decades. Overall, the movement was relatively calm but the drone was able to fly close to the action and capture the anti-riot unit dispersing protesters with tear gas. Amnesty International published a report noting the use of excessive brutality against the peaceful crowd: "the use of force during the protest violated international human rights law and standards."

A modified GoPro camera was mounted on top of a tiny three inches drone to film the video. For safety reason, the carbon fiber frame came with a propellor guard to avoid injuring the people underneath in case of crash. The video was edited by aufmschlau.ch and published on the YouTube account of Team BlackSheep, a drone racing manufacturer from Hong Kong. 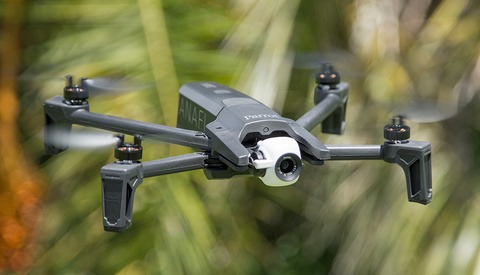