How long do you think it would take to photograph over five million miles of road? Since 2007, Google's Street View teams have been doing just that; capturing panoramic images of millions of miles of roads all over the world. Armed with a fleet of vehicles with 360 degree cameras mounted atop of them, the Street View team has managed to capture a few lucky shots while motoring across the globe. It's a pretty incredible project if you ask me.

Canadian artist and filmmaker Jon Rafman has spent many hours culling through images on Google’s Street View. By doing so, he has been able to grab screen shots that prove how interesting and diverse the streets that cover the world truly are.

With the increasing popularity of virtual reality technology, it's my prediction that soon one won't have to leave the comfort of their own home to experience nearly any place in the world. I'm not sure how exciting that sounds.

One thing is certain; the street I live on is boring in comparison to many of the streets Rafman cruises online. In the past I've used street view to help me scout out-of-state locations, which has proved to be beneficial.

Rafman posts his Street View finds, minus their location, to his blog titled "9 Eyes," named after the nine cameras used by the Google Street View cars. Google keeps information regarding where they've been and what they're up to next current online so you can know when and where to explore next.

how does it go? "if you want to take interesting pictures, drive by something interesting." ...

On a similar subject. Here is my Dad waving to the Google camera just weeks before his death in a plane crash. 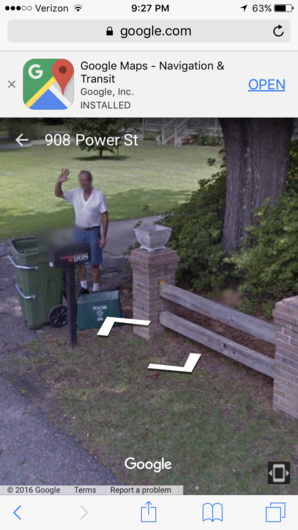 Aside from the above example though, it just goes to show that if you take enough (crappy) photos, you're bound to get a few gems in there occasionally. A theory that too many "photographers" subscribe to unfortunately.

Google street cars job is amazing. The photos captured by this car is really artistic and useful to find the current status of the location.click http://deltaemulatorios.net/ to download delta emulator to play all kinds of games on your ios device. Delta is multi-emulator to get all your favorite games on iPhone/iPod touch.