For any photography enthusiast, a nice view of a city’s skyline can be quite irresistible to photograph.

Shooting cityscapes can be a very simple task overall. With a good overlooking view, a reliable camera, and a sturdy tripod, one can just set up and keep shooting as the changes in the lighting conditions unfold.

One aspect of urban landscape photography that makes one stand out is composition. While the view of clusters of tall buildings interacting with the changing environment can be quite compelling on its own, a photo taken with a precisely planned out visual design makes all the difference. In this article, we will tackle some of the most effective composition techniques for shooting better cityscape images.

Some vantage points for cityscapes often showcase an unobstructed view of the entire skyline. This can be one of the easiest views to shoot when it comes to photographing the urban landscape, which is why finding and identifying locations just outside of the major clump of the city can be quite rewarding. The trick in shooting from such a vantage point simply requires deciding on where in the frame to put the cityscape and how much space you leave on the sides. 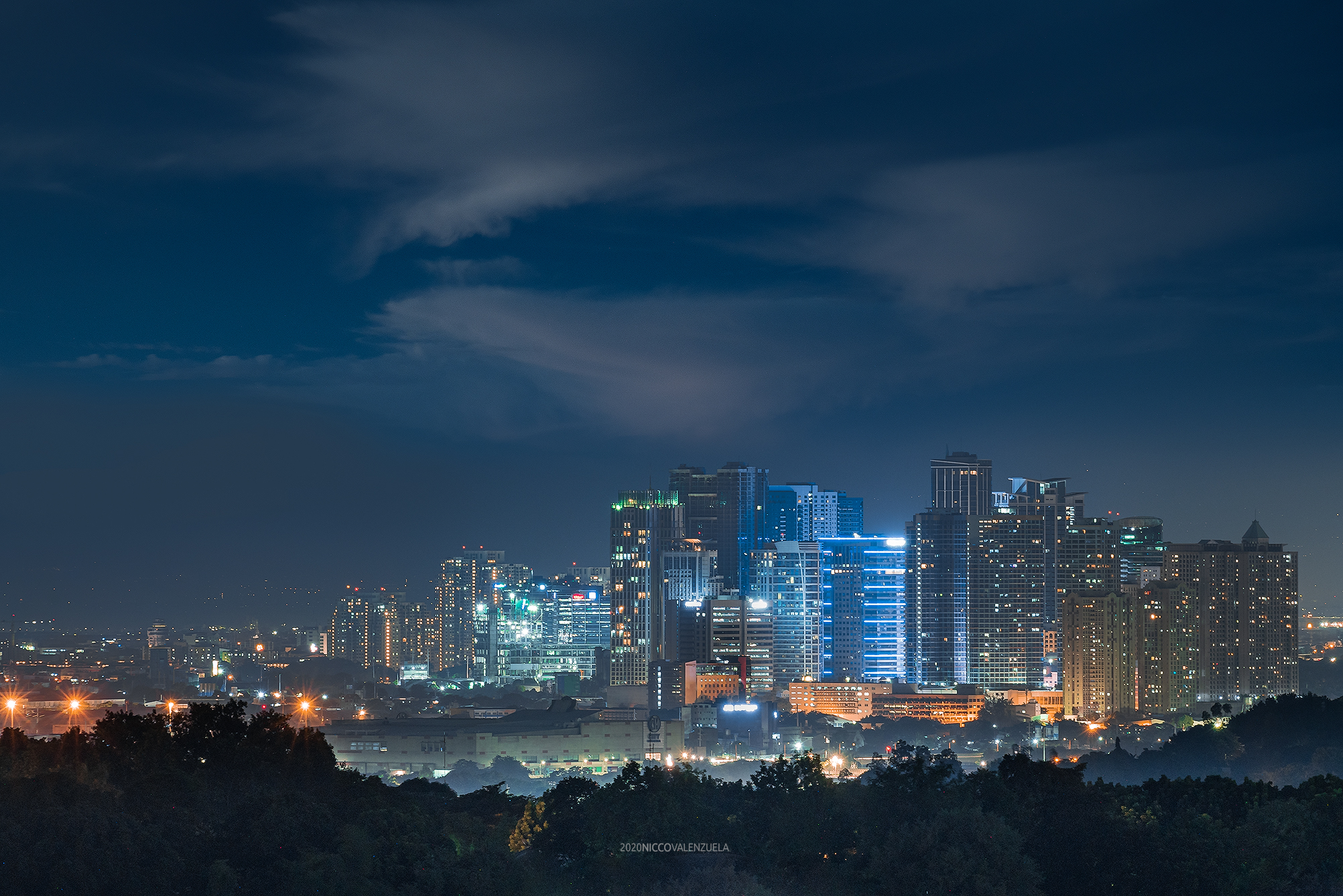 One way to do it is to leave about 10-20% of space on both sides. This means including some parts of the surrounding suburbs on the sides to give the cityscape a bit of isolation in the photograph. Making use of significant space on the sides gives the viewers the idea that the photo includes the entirety of the skyline and suggests that the pattern of tall columns has reached its end. 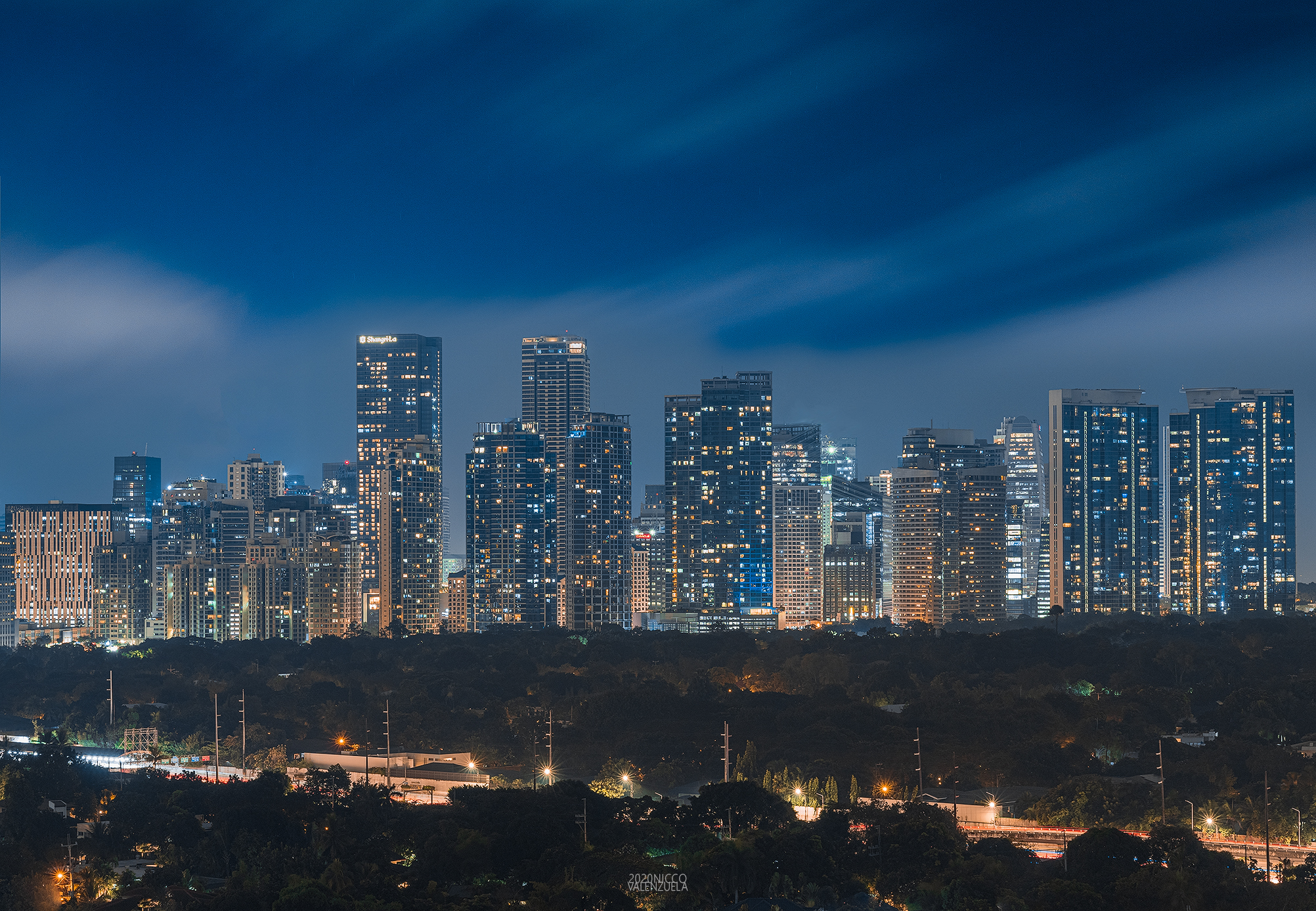 The opposite technique is to leave very little space on the sides. One can do this by leaving just enough space on the sides of the cityscape that is similar to the spaces in between all the other buildings in the middle. By doing this, the photographer basically leaves the ends of the photo open for interpretation. An unfinished pattern on the sides can often suggest that the pattern goes beyond the frame. The rule of thumb, of course, is to not cut off any structure on the edges of the photo, as it might become quite a dangling distraction no matter how small it is.

Any dynamic image requires a visual path. This is basically an element that signifies direction and suggests to the viewer’s eyes how to look around in the photograph. These visual elements can often be actual structures in the scene that lead towards a point of interest in the photo, or they can also be trails of movement captured through long exposure. 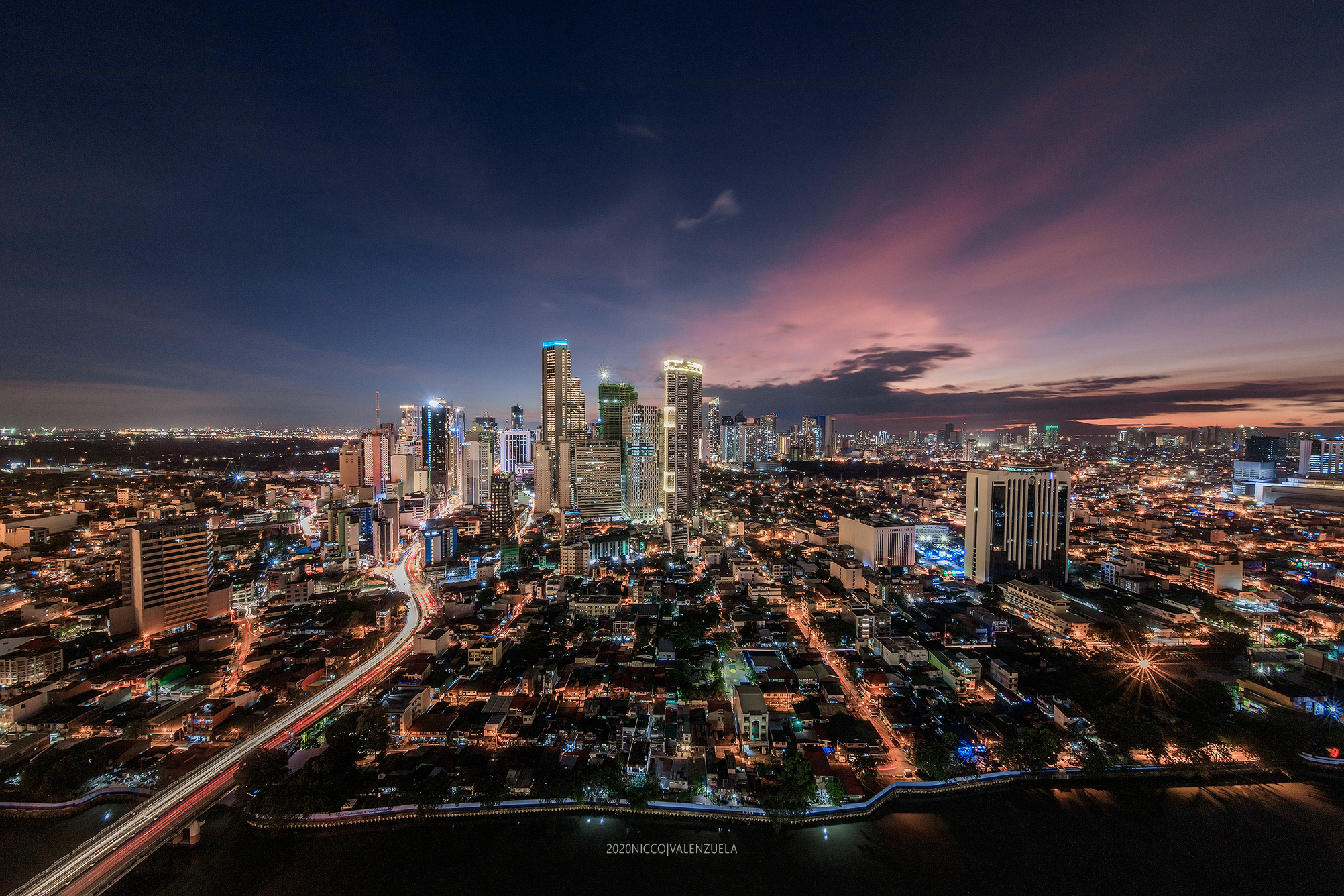 One thing to always look out for are busy roads that somehow seem to be a gateway into a certain city. These roads automatically light up with a bit of traffic and can be a major element in your shot that gives direction to your composition. Leading the eyes of your viewers through the frame can be very effective in having them spend a little bit more time admiring your image and giving the image more impact overall.

Much like in shooting portraits, leaving some space above your main subject can be quite crucial to an effective composition. This space can either be an empty sky, or it can be filled by details that give your shot a bit more dynamism.

For skyline shots with clear and empty skies, two visual design choices can be made. One can either give just enough space to show the empty sky or let the sky entirely overpower the composition. Doing the former gives more focus on the cityscape but gives just the right amount of attention to the apparent background. Doing the latter, however, and giving more negative space above can give your shot a bit of minimalism. The contrast between the smooth, empty sky and the rough textured skyline can be a sight quite pleasing to the eyes.

On the other hand, scenes with busy skies can be more impactful. Of course, the best example would be a skyline with a fiery sunset right above it. Knowing where to cut the frame can be a crucial aspect. Much like how we frame the edges of the city, ending the frame right with obvious business can lead your viewers to think that there’s a wider and grander sunset scene beyond the four corners of the frame.

With any kind of photography, elements on the corners can have such a heavy visual weight. It’s always important to make sure that the edges of the frame aren’t cluttered with bright or detailed elements that seem to be peeking into the frame. One of the most superficial definitions of composition in photography is placing your subject in a significant area in the frame, and an implied consequence of this means to rid the scene of any element that may take away the attention of your viewer from that element you put in the spotlight. 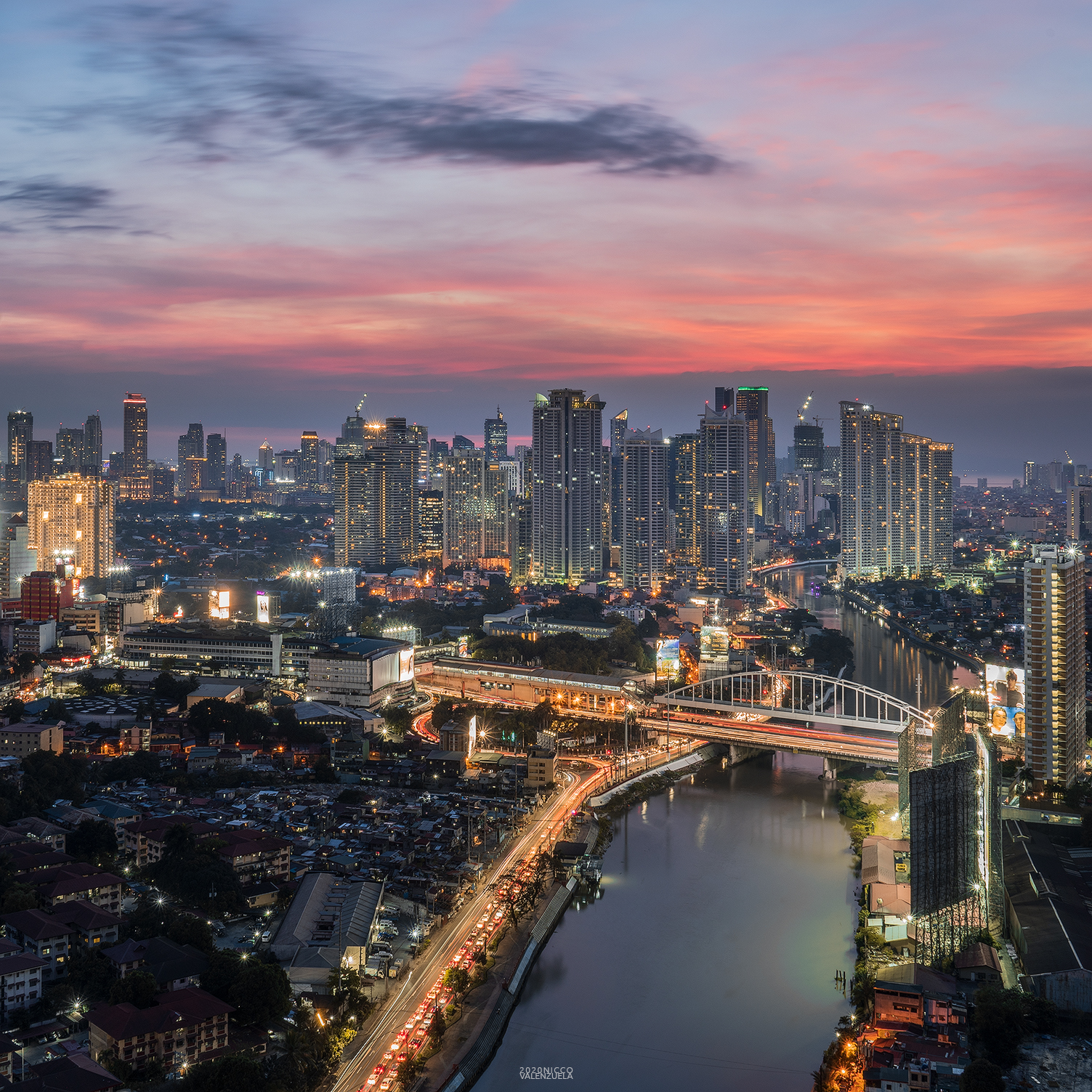 Another effective way of using the corners to benefit your visual design is to make use of diagonal lines. Much like the visual paths mentioned above, these lines not only direct the eyes towards the center but also ask for very minimal attention. I’ve personally found this as an effective technique when shooting cityscapes from within the city itself. Bigger and more proximal buildings that don’t fit in your frame can be quite tricky, and I’ve found that using them as frames can give more focus to the smaller buildings in the center. It also helps when the patterns of these buildings turn into diagonals that point to the inner cityscape (refer to lead image). 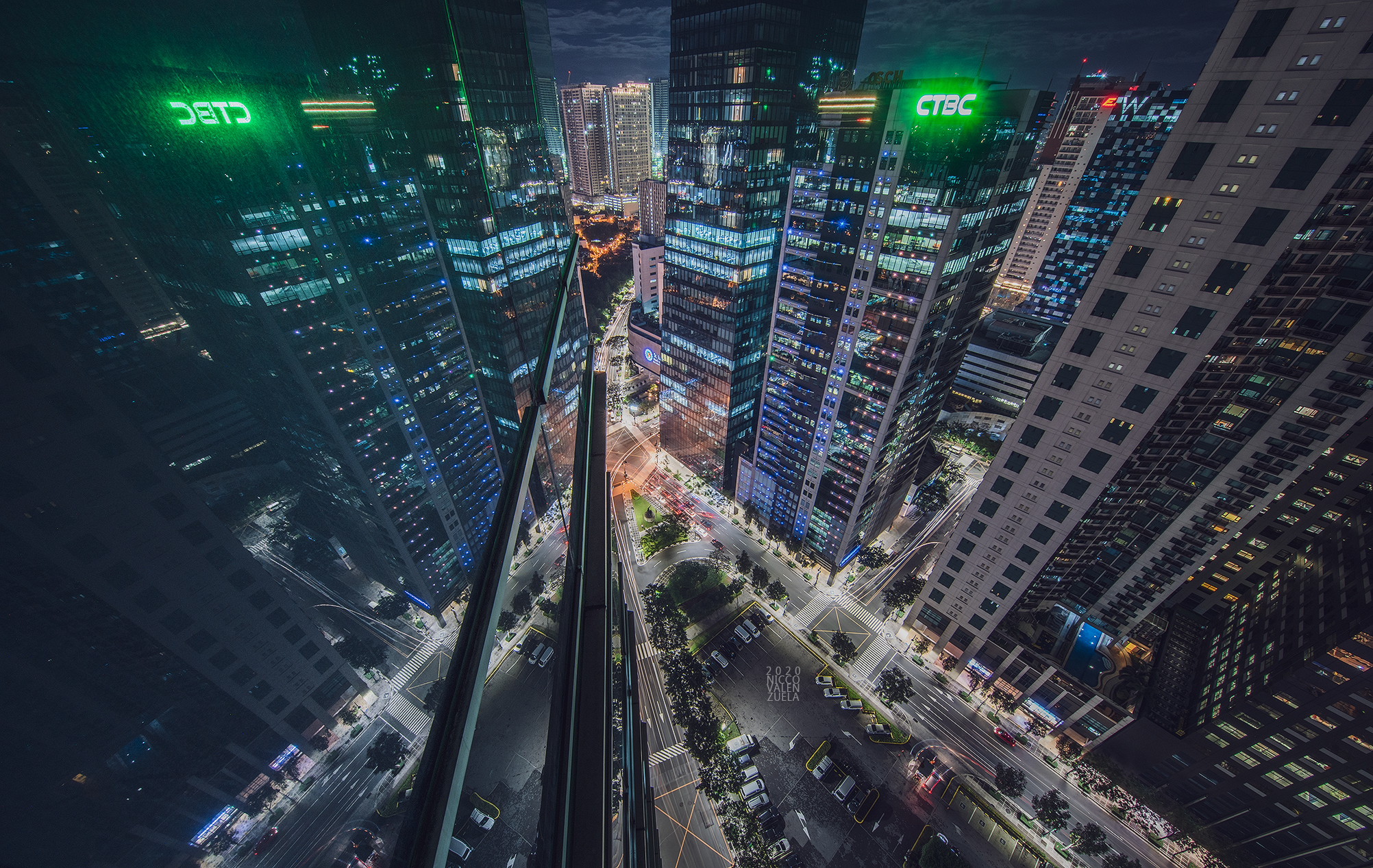 Nothing beats that impact of a new or unusual perspective. Most people who view your photos likely have already seen your location through other photos or films. This is why even some perfectly shot photos of an iconic skyline can be ignored for looking too much like a postcard. When shooting cityscapes, always explore the scene for vantage points that might give you a more unique or even farfetched look at the city. If you have significant confidence in the gear that you have, don’t hesitate to capture perspectives over the edges, especially if you’re shooting from a glass-curtained building.

Landscapes / November 30, 2019
A Review of the Sony a7R IV Based on What Matters to Landscape and Travel Photographers

These are all good points.

Sort of tangential, but IMHO so many of today's city photos are overprocessed. I like a city to look 'real'. But that's me.

Any kind of photography is totally dependent on the taste of the photographer and thats just really something I choose to respect universally. Thanks for appreciating the article, Jim! :)

Actually an article about editing/processing 'blue hour' and night photos of cities could be interesting. The camera doesn't usually capture the color as we remember it, and subsequent white balance adjustment is really a matter of taste. Pushing it in the blue direction makes the photo look more "modern", especially if there are sodium street lights. But how "blue" do we want to go? It's really arbitrary.