How I Converted My Living Room Into Scenes From History: A Year-Long Personal Project

In this article, go behind the scenes on a year-long photo project, a "Century of Portraits," and see what it took to make this ambitious series a reality.

We all have those big ideas, but often, the fear of the unknown and doubt stand in the way of our dreams. However, it is crucial that you overcome those obstacles and bring your visions to life.

As January was coming closer and the new year was about to commence, I was in a slump with my creativity and work. I had no ideas, I had no shoots planned, I just knew I wanted to get out of the rut as fast as possible. I knew I needed change. One night, I was laying in bed, scrolling through Youtube, desperately trying to get the next jolt of inspiration. To my luck, I came across the work of Tyler Shields from a behind the scenes documentary premiering his series called "Historical Fiction." I was instantly intrigued by the unique way he captured moments in history and how he portrayed his subjects. By looking through his series, it reminded me that in my work, I should allow my voice and vision to shine through. Since I started photography, I have always been drawn to people and the stories they have. So, that gave me the idea to recreate a portrait from every decade from the 1920s until now. Each picture would highlight the candid life of someone who was living in that era versus what they were really feeling inside. I called this project a "Century of Portraits."

This series traces the tropes of America’s decades from the Great Depression to the depression elicited by the omnipresence of and addiction to smartphones today. Every moment in time contains a story deeper than solely what is visible, which is contrasted in the series’ side-by-side shots. The series is not hopeful, not glistening; it is down to earth, real, and mundane. The series is not larger-than-life because it is life itself.

How It All Came Together

Now that the idea had been formulating in my head for a few weeks, it was time to bring that idea and vision into fruition. The first thing I did was log onto Google and started researching the historical periods from the 1920s until today. For each decade, I researched what was happening during that time such as the politics, historical events, and the classic iconography that was related to the time. The next thing I looked for was how peoples' residences were made at the time, taking note of the furniture that was used and how it was placed in the space. To make sure my pictures were historically accurate and conveyed the feeling of the time, I paid close attention to the colors and clothing the people were wearing. Next up were the props and costuming. For the next seven months, I stocked up on everything vintage, scavenging my local thrift shops and reached out to everyone I knew and didn't, and they graciously lent me the accurate props I needed.

The one thing I knew from the beginning of this process is that I would not be able to do it alone. I needed to find a solid crew that would keep me motivated and would bring energy to every set. So, I reached out to all my closest friends, colleagues, strangers, fellow artists, and we all collaborated and created art together.

To give you an idea about how much meticulous thought went into every set of pictures, each shoot took nearly one to two months to plan. We had to gather the props, the costuming, the crew, and had to coordinate times with models. As we are all full-time college students, scheduling was one of the biggest hurdles to get over. Once all the pieces were put together, the models showed up at my doorstep, and it was go time. For this project, we converted my house into 20 sets, built 20 different lighting setups, and put together ten different shoots. Each shoot took close to six hours to complete. The reason it took so long was because I had to convince the models (who have never stepped in front of the camera) that they were sitting in that time period and had to convey a certain feeling. I chose to pick ordinary people who have never modeled before to make it more authentic and play into my theme of showcasing the lives of the everyday person. By the end of each shoot, although it was incredibly exhausting, we all felt like we were reliving a moment in history.

In this gallery, see what it took to make these photos a reality. See how we turned my mundane 8x8-foot living room into a fully functioning time machine as well as the lighting that went into each scene.

Below are the final photos from the shoots. Attached to each photo is a short story describing the scene.

Before beginning this project, I have never done something that was up to this size. It was definitely a scary thought, and there were a lot of unknowns that entered my mind. What if nobody likes the project? What if I could not complete it? Would my time be worth it?

I will start by saying that this project was not easy; however, at the end of the day, I walked away with numerous valuable lessons and new experiences that I will never forget. First, I learned that staying consistent with your vision and never letting it fade is one of the most important things in photography. During the duration of this project,  I constantly said I wanted to quit the project because it was too hard, for example, when I set up a shoot for two months and the model bailed in the last minute or when I didn't have access to certain props. The success of a project is not about how you fail, but how you pick yourself up and push through it. Ever since doing the first shoot, I said I was going to complete it no matter what, and one year later, I did. Taking the last shot in this series was an emotional experience and so surreal.

Being that this was a personal project, I had the opportunity to try new things and fail. Through doing this body of work, I learned everything I know today about lighting and set design. After completing the project, I now see my work through a different lens, one that pays more attention to detail and connection with the model. Before taking on this series, I typically would work alone, but it helped me to get out of my comfort zone and interact more with my community.

One year later, I am premiering the project and releasing the images publicly for the first time. It is an honor to share it here with you all. I can't thank all of the people who made this project possible and am so privileged to have worked with all of you!

Do you have a personal project that you're waiting to shoot and make happen? Go out today, grab your camera, and make your vision a reality! 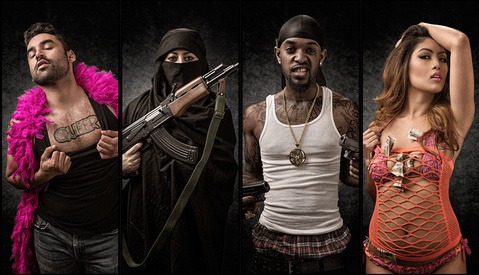 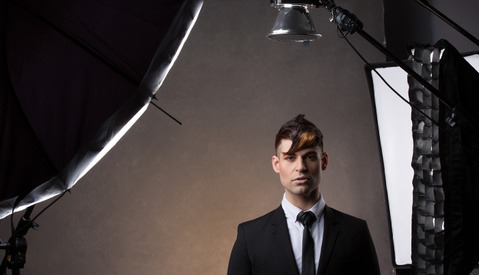 Thank you so much! Means alot!

I really like the piano player and the last two. Looks like you did a lot of work on the photos but a couple details popped out to me. The polaroid camera in the 1920s shot is from the 60s. Pocket watches were "out of fashion" by the 1940s and are you sure that toaster oven is from the 1950s and why is the 1970s newspaper aged if the hippy guy is reading it in the 1970s ?
Like they say "The devil is in the details" The happy face flower pot is perfect.

Thank you for your feedback. I really appreciate you taking the time to comment. I agree entirely with everything you said, and very aware. I decided that having the project done is far better than it being perfect. Some things I simply did not have access to.

Wow thanks Gabrielle for the comment! Really appreciate it!

Well done man! looking forward to the next ones!!!

Means alot! Thanks for the kind words!

Thanks so much for the kind words! Cheers!

This is an awesome project. While others might discussing if some of the details are 100% correct, I appreciate the details (And I know it's not easy to get the right props, still looking for a 30s phone for a staged shot)

Thanks for sharing, Eli.

ThAnks for the kind words! I always say done is better than perfect! It's so nice to see some people appreciating a year worth of work. :)

That is a lot of hard work but the results were worth it! You do know that you are putting the rest of us who don't do personal projects to shame. ; )

Thanks my friend! So worth it! I always get emotional looking back at them and how much memories and work went into each one! Ha ha go out and make your vision a relaity!