Do you ever get the opportunity that you just can't let slip away? In this quick behind the scenes breakdown, see how I shot a portrait of inspirational speaker and renowned musical prodigy, Sparsh Shah.

When my mother, who does work with artists, called me up late Saturday night, and mentioned that the famous inspirational speaker was in town for only that night and needed his portrait taken, it was an opportunity I couldn't pass up. For those of you who don't know who Sparsh Shah is, he is a 15-year-old, who was born with Osteogenesis Imperfecta, also more commonly known as Brittle Bone Disease. When he was born, he had nearly forty fractures, and has broken more than 130 bones over the years. But despite all of his struggle, he still has an unbreakable spirit. He is a firm believer in changing the word impossible to "I'm possible". After hearing his story, I was honored to capture his portrait. In the pictures, I took of him that night, I set out to capture a glimmer of hope in his eyes and capture a portrait where his personality shines through, rather than his disability.

As you can see in the behind the scenes image, we were given limited space and time to shoot the image, so I had to keep my setup simple and small. I also had under an hour to get it right, so I had to think quick on my feet. This was a new kind of experience for me.

To expose the scene, I wanted to completely cut out all the ambient light from the room, so that the only light source in the image would be from the strobe. The settings were:

The first thought that went through my mind when assessing the ambient light in the scene was that the lighting in the room was gross florescent lights that casted uneven shadows on my subject. I immediately knew, I had to overpower the ambient light, and let the flash do the rest of the work. Once my ambient exposure was dialed in, I turned my attention to the position and power of my strobe. The power of the strobe was set to 1/4 power.

I first noticed that six feet behind me was a white wall, so my initial thought was to bounce it off the ceiling or wall but the shadows were too strong for my taste. After numerous failed attempts though, I resorted back to my go to setup that I would do in the studio: butterfly lighting. Butterfly lighting is created by placing your light directly above the subject’s eye level and pointed down at a 45-degree angle. In this specific case, since I was shooting tight on the Canon 70-200mm f/2.8 so I was able to place the light right above the lens and got it as close to the subject as possible to create soft and even light on his face. 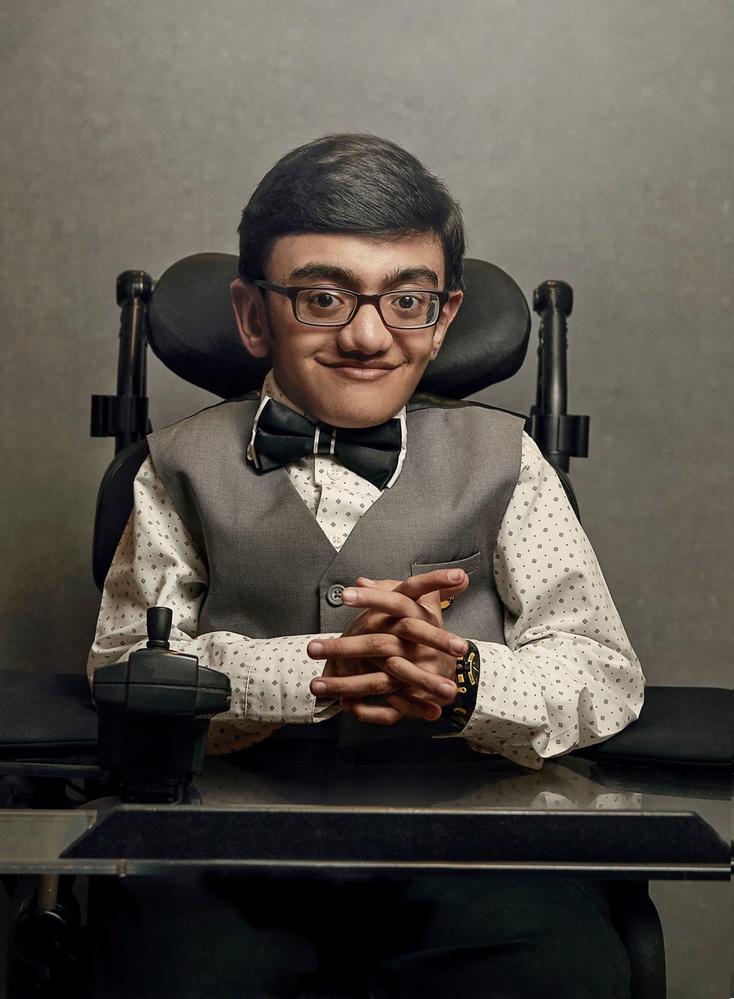 After photographing Sparsh, I walked away with a number of valuable lessons. The biggest thing I learned is that you have to make the most of what you have to make great pictures. A great picture can be taken anywhere, you just need to have the knowledge of what you want the final image to look like. Additionally, I learned that you must be quick on your feet and know the equipment that you have so you can show up to a scene and know exactly what to do from the beginning.

If you want to learn more about Sparsh and his incredible artistic endeavors, be sure to check out his YouTube channel for inspiring content every week.

BTS / April 7, 2019
How I Shot This Fashion Editorial on 6x7 Film With Speedlights

Sorry, what is so unique or educational about this shot? The results are rather average, and lighting could be much better, to be honest.

How can the lighting be better? I'm open for suggestions!

The shadows around the fingers, the left side of the chair, and the folds of his vest aren’t ideal. Lobbies usually have pretty high ceilings, but that ceiling was quite low and light colored. Bouncing light off of the ceiling would’ve yielded much more pleasant results vs. straight on with a single light for this type of portrait. He is a warm and inspirational figure. The hard light almost makes him look sinister.

Good point. I tried bouncing the light off the ceiling, but the shadows were a lot worse. Additionally, I tried bouncing the light off the white walls 8-10ft back back, but the light wasn't powerful enough.The harshness of the light could also be because of the small soft box. As I have mentioned, I enjoy comments like these that explain and give suggestion on how it can be better, not just a blatant comment saying "I don't like it" but don't explain why.

You should probably ignore all the desk jockeys that probably for the most part have no real world experience and know everything but then go to their 9 to 5 job woking in middle management somewhere. These are the same guys that front light everything and make it super flat and think it's great that all the shadows are filled in. Your portrait looks great. Keep doing what you do.

Thank you! I guess I should have explained why I kept the dramatic shadows. There will always be those people. I'm just trying to encourage a productive comment thread where we can all learn something.

Yep, that's my problem. I only had the softbox with me, so it explains why there was not so much light coming out of it. I also didn't want too much spill on the scene though to keep the light more focused on his face.

I also ignore people who write off criticism as people not knowing what they’re talking about.

It doesn't need to be. You know there are a variety of types in photography, one of which is the "Insecure guy" that feels threatened by ANYONE else's photography and therefore offers you unsolicited critique. Thank you for sharing your work and the story behind this shot.

I appreciate you taking the time to read it and glad you got something out of it! A lot more articles like this are in the Pipe line!

I love the photo Eli. Another option you could try is to move the light in much closer and feather it a bit. (https://www.youtube.com/watch?time_continue=2&v=RHw0OyT8Nv0) It would mean that you would have to light the background separately because it would get very little light from the main light. By the way the pose and angle is great.

Yeah true! I could have gotten it right above the camera like in the video. But then again trying to battle the reflection in the glasses was near impossible. I found for lighting glasses, this setup works the best. Also thanks for the kind words. Glad you liked it.

I never post comments here, but when I started reading the other comments and had to chime in. From a studio photographer, you did a great job. Those exact shadows people are mentioning are what gives the picture a mood with the color correction and haze on top? Either way, I know you are a nice guy because its your article but when in doubt, when someone gives very long criticism, just go and look at their portfolio. Yeah....thats all Im going to say. Anyone can take a random fully lit photo but not many can get the mood and Id take your portrait of the guy any day over some 5 light setups that have no shadows and give a bland over-lit picture.

Keep up the great work and never listen to someone that starts dissecting a photo "the white balance is wrong, the hands could be different pose, the left finger should be pointing up, that chair in the background should be slightly to the left bla bla." Thats why you get work and they sit at home taking pictures of their cats.

Thanks for the kind words. I definitely use that tip all of the time ha ha! The image definitely isn't perfect, but I don't think any image is.

Well, for this amazing person maybe the only thing I think you can improved on is catch-light in his eyes (if a single light only, add a reflector under him).
The images is great, but if you interested in how it could be better from my perspective - for a single light - use a bigger diffuser, makes shadows less harsh. A bigger octa, or soft-box, also not top and front, but a slightly to the side. But maybe circumstances did not allowed that, top light is also fine.

Speaking about catch light. When you dont have enough vertical space, to make key light 45 degrees down (if positioned in front of him) and add a reflector under - add a strobe on a side, f.e.x in your case I would positioned it behind his right shoulder, put a grid on it - that it just give a small rim light on his head, and aim it somewhere over his head but into a reflector -> put an a reflector in front of him on the opposite side, that would create a catch light in his eyes.

There is a catchlight. So I'm not sure what you're pointing out. The light is also off to the side slightly. I will definitely consider brining a reflector the next time! 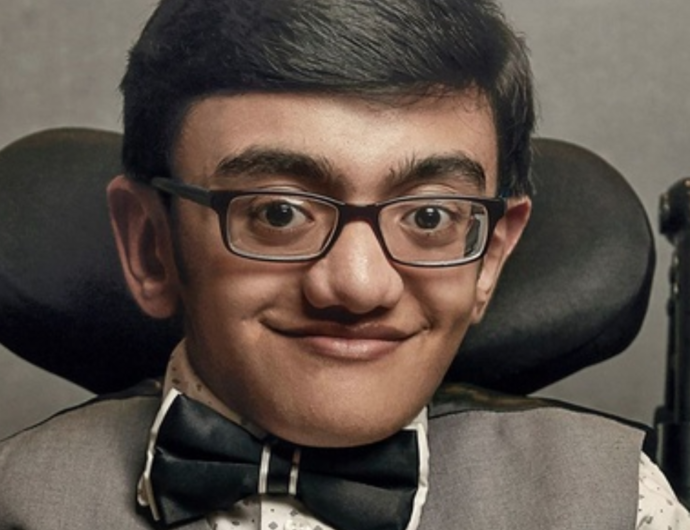 yeah, i mean add another one :) or two. that is what i was pointing out to.

I hear what you're saying, but personally I like to stick to 1 light and 1 catchlight for the most natural looking results.

I will take this article over the countless rehash of some YouTuber posting some video. What is unique about this shot is that not everyday you get to photograph someone who inspires. Great work and great article.

Really appreciate it. The subject matter in many cases over rides the technical. That's the reason why i focused more about the opportunity then the lighting etc. As he noted the lighting is rather basic, but anything more complex would take away from it.

Everyone we get to photograph has their own (unique) personality. In this case, by “unique” I meant - what is unique in terms of technique used, lighting, approach, etc. rather than a unique personality the author was capturing.

What makes a lighting setup more unique? As I mentioned this was a go to butterfly lighting setup. If it were more "unique" i think it would have taken away.

Yes Yan, he could have dramatic lighting like this one:
https://fstoppers.com/photo/322291

Luckily some people have photos posted so when they start criticizing others work, all you have to do is go to their profile and you will know what time it is lol. Yan...

hahahahahaha! If I only had a nickel for the times I've done that and laughed.

Not sure what do you mean exactly. You may want to consider trying to express yourself in a clearer way. I am absolutely fine with my photos being reposted and being criticised (it helps me in getting better). However, reposting may require asking for a permission from a person on the photo, as you might be aware of.

No, no it would not require permission.

Hello (to start with). Although you might be right, and permission may not be required, it is a better (much more polite and respectful) way of doing reposting comparing to just copying and reposting an image.