How I Shot This Set of Studio Images Using Backlighting

If you’ve been following my recent articles, you’ll know that I’ve been on an umbrella modifier trend. I just love how portable and easy to set up they are.

It's pretty wild to think about the impact that such a small piece of gear can have on the look and feel of a shoot. It's fantastic from the perspective of having access to umbrella modifiers but also from the perspective of being more willing to experiment. You really never know what kind of an impact a piece of gear or a particular prop might have. Experiment, play, and generally try new things, especially when you have the creative and time freedom to do so on your own shoots.

For this test shoot, I wanted to photograph a dark skin model in a lavish outfit while she was backlit. Dicky Ishak had provided gowns for my photoshoots before, so going to him to work together for this was an easy decision. My aim was to achieve an image that was both expensive and classy.

Model-wise, I’ve worked with Kyiona multiple times and have always loved her look. I also have a good enough working relationship with her for her to endure my random shoot ideas. I guess no loss for her as long as I promise more beautiful images for her portfolio!

For most backlit images I’ve seen, the majority of them are usually backlit by a huge octa softbox or through a scrim. In the name of experimenting and mostly due to my own laziness, I wanted to try having the images backlit by the huge translucent umbrella. I had also only received that umbrella recently and really wanted to try it out!

The umbrella truly was huge compared to my very small, beautiful face. However, it turns out models are really tall. Who knew?! Due to that, I added an additional smaller umbrella on top of my big umbrella just so I could cover the model head to... knees.

The main image was only lit by the umbrellas behind. However, this lighting only really works beautifully when the model is side profile. Once she turns her head towards the camera, the lighting on her face became a little too underexposed. For these shots, I added another light in front with a silver modifier.

In some of the images, you could see some of the umbrellas ribs when highlights were brought down, and it took additional retouching to remove them. I guess that’s one thing you would not have to worry about if using an octa softbox or a shoot-through scrim! Editing was mostly quite basic, as Kyiona had great skin. Colors were brought together nicely with Pratik Naik’s Infinite Color Panel.

Created a moving image with the first image of the shoot. Really loved the results!

Umbrellas are truly versatile and fun to work with! Do you like using umbrellas in your own setups? What other kind of gear do you work with that you absolutely swear by?

You need to get a nice roll of savage translum or lee difusion. No ribs to edit, smooth and clean. Then you can do full body backlit shots. 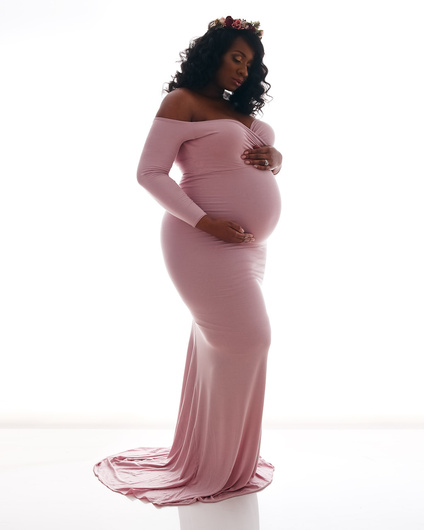 Yeah. But lazy. Wanted to see if this might work.

You could also hang up a roll of white seamless and blow it out with 2 or 4 strobe heads (depending on how big your studio is) then light your subject with your giant umbrella.
By adjusting the power ratio on the BG and key light.you can control the back bounce "wraparound'.

I know, but I didn't feel like setting up a backdrop or too many lights haha

Did you read the first paragraph?
The whole concept of Shavonne lighting is here.
"If you’ve been following my recent articles, you’ll know that I’ve been on an umbrella modifier trend. I just love how portable and easy to set up they are."
It is obvious that Shavonne knows she can do otherwise..... it is simply not her goal.

I did, thanks for asking.
There are many ways to achieve the same results. If someone has a white wall but not a giant umbrella or softbox, they could still get the same look (as Shavonne said in her reply).

Great article! But I feel there's too little wraparound. Maybe use your flats as reflectors instead of spill kill? Or a reflective umbrella?

I personally like this setup with a big softbox and smaller softbox or beauty dish from the front. With gels of course :)

David T
Back is lit 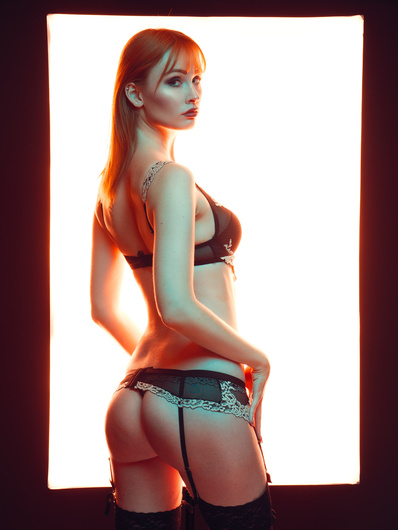 Shavonne Wong, you are most welcome to borrow my Golfing umbrella any time. Its massive.

Very interesting article, thanks. Good to see some community follow-up with related ideas too.

Still waiting for that Cinemagraph tutorial 😁

I'm actually prepping for some ad-spec work and plan on trying out cinemagraphs for it!