It was an exciting brief with very clear instructions from the creatives on the type of weapons and poses needed. His job was to realize those actions and poses and make it work with the CGI elements that will happen later in post.

He created a lighting style that looks cinematic and works well against a dark background, and also created custom rigs with small flashes on them to motivate the light that would eventually come from the CGI elements, as he needed that intimacy of the light to react on them for that realism! The studio itself was a fairly tight space but as it was an etched out shoot, the background did not matter too much and he was able to make it work.

The whole setup was lit with Profoto lights. He had two B1X on left in a clamshell for a soft edge light, one D2 with a 5 Octa on the right for edge light and one D2 on a standard reflector bounced into a low ceiling to act as a large softbox for hair light. Additionally to those lights, he also used two A1s with coloured gels on various contraptions to help motivate the light coming from the weapons. Lastly, he added a couple of positive and negative bounce boards used to create contrast and fill.

When Ang first received the brief and visuals, he started to plan his lighting and create the mock weapons. He needed light sources that were versatile enough to allow him to position them in a way that portrayed the glow of the weapons realistically. This was imperative in order to give the CGI artist enough information to work on the final image.

According to Ang said, "The Profoto A1 was crucial in allowing me to place them in the hands of the talents. It’s small size, the quality of light from it's small form factor and it's ability to work seamlessly with the bigger Profoto heads just made it so effortless for me!". As Ang works entirely in the Profoto eco-system, he was able to work from the smallest heads (A1) to the biggest flash heads (Pro10 with Proheads) seamlessly and with the same quality of light and temperature which made his work as a photographer that much easier.

All the lights were used on the freeze mode and fast recycle to ensure sharpness with all the fast motion the talents had to do and the high burst rate Ang shot with. He shot a variety of images with different models and poses and depending on where the character's facing, lights were dimmed and powered up to be main or fill sources. The images were also done on a neutral grey background to allow for easy etching and also to allow for some light bounce back to the talents.

All in all, Ang was able to use the tight space to his advantage, using the surrounding ceiling and walls as soft bounce to wrap around the talents in a more intimate way. He mentions that it was only possible due to the sutdio only having white or grey walls, therefore not needing to worry about any colour cast. With negative fill positioning, he was able to create a fantastic base image for the CGI artist to take it further.

Hah! Thats a clever use of strobes, I like it!

I thought so too! Loved the rigs haha.

I like the idea of having them hold the strobes but making this about profoto is overkill. This could be done with a few cheap speedlights and some Photoshop work easily. Any time this is all someone wants I smile cause I know I can shoot and finish it fast and still have time for video games that day.

Again, listing the equipment, that incidentally is Profoto..Not needed, neither the list or the use of Profoto.

I guess he get supported by Profoto so it's fine if he pushes it.

Most photoshoots can be done similarly with cheaper versions of equipment.
But no reason not to use professional available equipment on a professional client shoot.

Profoto is mentioned throughout so for people learning it might give the impression that thousands of dollars is needed to do something like this which is never the case.

an ad dressed up as a review

the editing here is extreme. its not a "finish" fast at all.

It's a commercial shoot for *GAMING* headphones, i.e. the target audience is gamers. If they were given a 60s style Christmas-sweater look or men with an 80s style mullet and jeans on a purple backdrop, they won't buy the product, because ads don't resonate with their virtual worlds.

He just means that it is intentionally done in a way that is extreme. It suits the target audience of the end product. It's not intended to be fine art catering to people with refined tastes.

but it is a profoto ad dressed to look like a review. I need to be smarter not to click on these in the future.

Was it an ad? I wish someone told me so I could get paid for it hah!

Honestly, if that's all you learnt.... that's kinda sad.
Personally, I found the way the lights were used to be creative and interesting. It's something I'm glad to be able to put into my toolbox of ideas.

kinda sad for you that you were sharp to see it

Personally I found it very interesting how the lights were setup and used. Who cares what brand of lights they used? Didn't find this to be an ad at all. I'd love to see more of this type of content on Fstoppers.

Hehe okay only because you said so...
I have a bunch of other photographers and their BTS to some really awesome images lined up for future articles! :D

I am really excited to see more of these BTS stuff you have lined up, Shavonne! Keep 'em coming!

Glad you're excited hehe, and I will! 😊

sweet. happy you liked it. doesnt negate what my opinion is about it though.

And ... you really think that this pictures will make them buy stuff ... ?
Looks like you overestimate something ...

If client pays for the rental - why not?

It's a BTS of a commerial project, after all. It is not a tutorial "how to achieve a similar effect with budget lighting." Once the principle is grasped, one can do that with any lights and creativity. Look for the principle, not at the gear.

Profoto was mentioned throughout the article which was the only thing that threw me off about it. And the fact that if you took out the CGI added in post, it's a simple look. I used to think commercial photographers and movie promotions were done by just a photographer and I was impressed. Then I learned that they take a picture designed by committee and then hand it off for stock art and Photoshop to be added by an art house. Then I was less impressed.

Sometimes I do photographs and videos with CG and the reason for using CG is when it's cheaper to do it in 3D or 2D than building an actual set. Sometimes it's cheaper to make a real set, of course. Other times there's enough budget to build a set so that it is real for real's sake. As long as the final goal is met and it looks real enough (depends on what level of reality is aimed for), it's fine.

Oh I don't have a problem with post work. Most of my work is a composition. 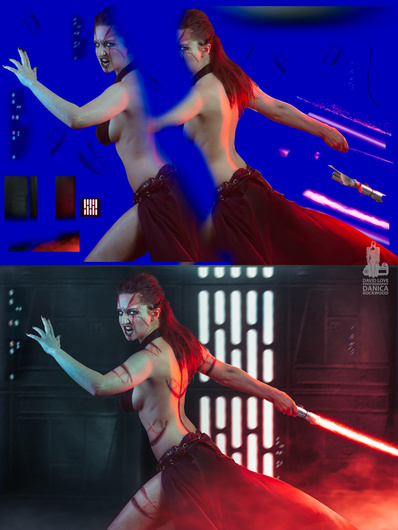 But let's say you already own a bunch of profoto stuff from previous shoots, why wouldn't you use it? Anyone who has shot in studio is smart enough to understand you can do this with cheaper lighting setups.

People use what they use. I could give a tutorial announcing I used 4 strobes with a stripbox, octabox, flags, etc without waving the expensive equipment in your face. So what am I to be impressed with here? The concept he was told to do, the expensive equipment used or the post work done by someone else? And most clients I have don't know if my gear was cheap or expensive. They've seen my work and heard my idea and I got the job.

A beginner would look at this and see:

As I did when I first started in photography and then they might assume they will never be pro without spending a fortune for a light that blinks in the direction you point it. Did Rembrandt have a more expensive window to light his subjects for paintings? Nope. It's the painter to admire, not the window.

Keep in mind Rembrandt was a wise painter, not a dumb machine that simply copies what's in front of it, like the camera. A painter would not have a problem if the subject is lit by a window on a gloomy day or diffused with a curtain on a sunny day. They can do what they want. Do you think in the painting "The Night Watch" there were 10+ people staying still in the position you see for 6 hours with the sun sitting still to wait him at least sketch the subjects and roughly the highlights and shadows? Painters are so much different than photographers. They have more tools at their disposal and unlimited "lights" of highest quality and color temperature.

So if it's about the lighting and concept then...

would work better in the article.

If it's the painter to admire, not the window, why are talking about the prices of his window then?

Everyone knows the high cost of profoto equipment. Would be like me doing a driving tutorial but only mentioning the Lamborghini as the car I use.