CIPA recently released February shipment figures for the camera industry, which paint a picture of mixed fortunes and a complex path ahead for manufacturers. This generally looks to be positive news for Sony and Canon but is a warning for Nikon and Pentax.

Camera shipment figures have been a bit of a car crash for the last decade. Peaking at 120M units in 2010, the sector has been in free fall since, and unsurprisingly, the culprit is the smartphone. However, this simple point hides a key fact: compact cameras accounted for some 90% of the market. This was "pile it high, sell it cheap" economics, with small margins on big volumes. Make no mistake, there were significant incomes to manufacturers: the value of goods shipped actually peaked in 2008 at 2,164B ¥ (although this isn't sales figures or profit), dropping to 420B ¥ today, and that doesn't take into account inflation. This wealth wasn't predicated on the highly technical DSLR market, but the compact camera. The figure below shows DSLR and mirrorless shipments, and not surprisingly, DSLRs peaked in 2011, but shipments were a more modest 18M, at which point, we see MILCs separated out as a distinct category. The MILC market has subsequently stayed static, but at a time when every other category has seen rapid reductions in shipments. In this sense, it has been successful and the growth area for camera development. 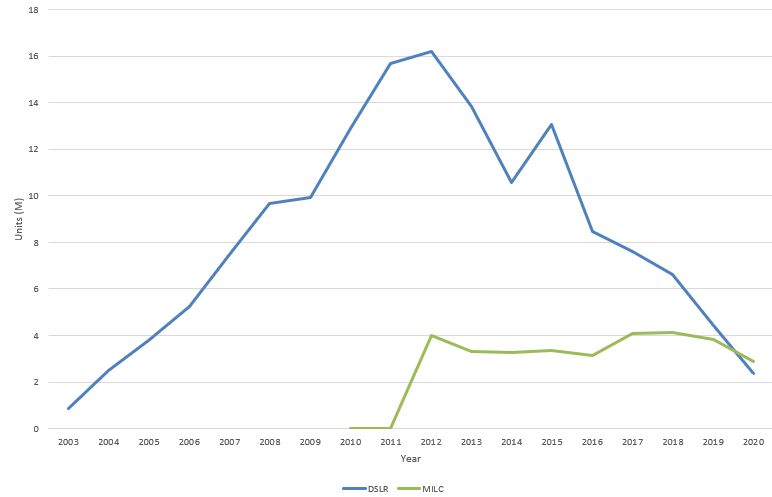 Shipments of cameras are only one side of the sales coin, with the other being the value of those shipments. As the figure below shows, these peaked for DSLRs in 2012 before declining at the same rate at which they increased in the early 2000s. However, at the peak of the market in 2008, compact cameras made up some 92% of units shipped and 76% by value. By 2011, this was 85% of units shipped but only 63% by value, showing the relative drop in the value of the compact. By 2012, shipment value had dropped to less than 50% and by 2020 only made up 20%. Unsurprisingly, interchangeable lens cameras are high-value items that now make up the vast proportion of the value of units shipped (80%). 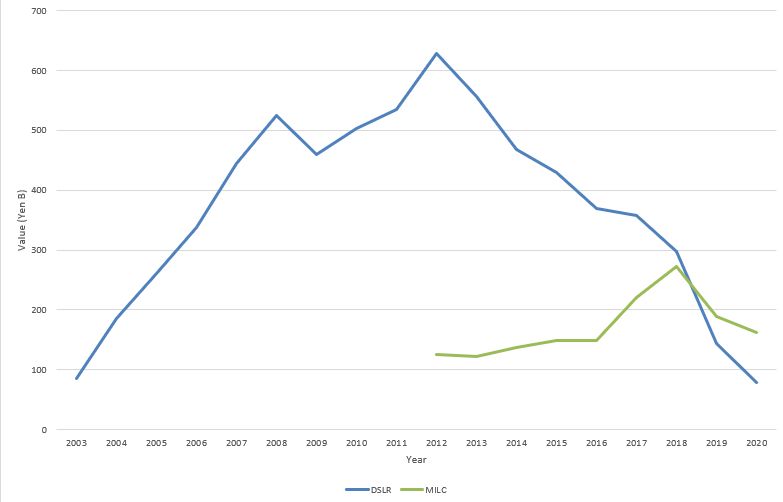 The Year of the Mirrorless

More than anything else, what the CIPA figures show is that 2020 was a landmark year: it was the first time that more MILCs were shipped than DSLRs. More than that, 2019 was when the value of MILCs shipped surpassed that of DSLRs, with the gap widening in 2020.

Trying to understand the different effects here is difficult. Camera shipments (units and value) are both falling, although MILC units shipped are broadly static, with their value a little more variable. Add into the mix the impact of the COVID pandemic and Canon and Nikon switching their production to mirrorless, and the impact upon the figures we see is complex. Disaggregating these factors and determining whether they are cause or effect is therefore hard to do.

Firstly — and unequivocally — DSLR shipments are in rapid decline, but this is partly a result of Nikon and Canon switching their development and product roadmap to mirrorless. There are fewer DSLRs being made and so less shipped and sold. However, this is also partly driven by what consumers want to purchase: it's push and pull. Either way, this market is rapidly becoming vanishingly small; just how small remains to be seen, although it is still hard to fathom Pentax's release of the K3 Mark III.

Secondly, the value of MILC shipments has risen in comparison to DSLRs, a result of higher-value items being sold. This is a result of several factors which are working in their favor. Firstly, manufacturers are deliberately pushing MILCs as high-ticket items, making them more expensive. With relatively low production numbers, they need healthier margins in order to make them profitable, particularly as development costs are higher at the moment as they fill out new ranges. Secondly, it is also a matter of timing, with 2020 seeing the release of a number of high-end models that are, as a result, more expensive; while the sector as a whole is spending less, the relative proportion on MILCs is higher. The converse is also true: there have been almost no DSLRs released and product price (as new models come out) tends to decrease. As a result, MILCs are higher-value items.

All of which goes to demonstrate that MILCs are under active development and DSLRs are not and shows that the era of the DSLR is well and truly over. There is some money still to be made, predominantly in lens sales, but MILCs are where manufacturers believe consumers are spending their money, and ultimately, this drives the sector.

The CIPA shipment data for 2021 is interesting to see how manufacturers are responding to nascent demand from consumers and, as the figure below shows, not too encouragingly. Total January shipments are down again, year on year, and we are near a 75% reduction from 2017. It is encouraging that February figures have risen, but this should be taken within the context of the dramatic slump during 2020. The question is whether 2021 will be a further reduction on 2020, and I suspect manufacturers will be cautious of over-supply when the market is trying to recover.

The one key area that has seen growth is mirrorless, reporting a cumulative 5% bump in 2020. However, this actually represents a 33% increase in value, again demonstrating the impact of newer, higher-value models currently selling in the marketplace. I don't think it shows any innate recovery of the sector as a whole. 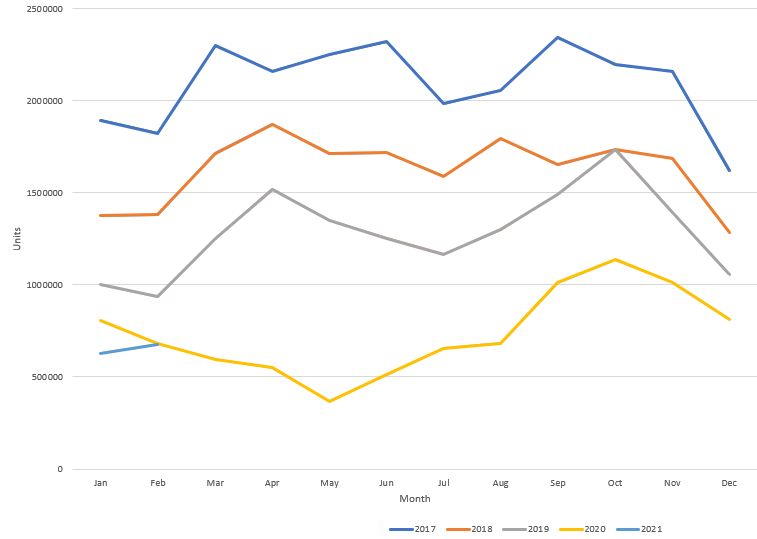 Where does this leave the sector as a whole? Perhaps the obvious point is that Sony, Nikon, and Canon are driving forward development. Sony and Canon led sales in the sector during 2020, which serves to show that revenue will be accumulating with them. Nikon is still struggling with sales and cash, but appears to be optimistic. Pentax remains in the bizarre position of retaining an aging product range and releasing a high-end DSLR. That then leaves Fuji, Panasonic, and Olympus. Fuji remains modestly successful with its digital cameras, supported by its profitable Instax business. The future of Panasonic and Olympus remains a little more opaque given Olympus' sale and the future roadmap for Micro Four Thirds. One thing is for sure: 2021 should provide some more clarity.

The higher prices will certainly flush out any potential casual shooters. This is now a hobby only for the serious enthusiast and, of course, pros.

As painful as it is, I do tend to agree with you. The price of owning a mirrorless system camera with lenses has definitely gone dramatically up, with only the most committed pros and enthusiast willing to pony up the money at those levels. The big companies are pretty much relinquishing most ground at the entry level and casual photography level to the smartphone cameras. Of course, there seems to be a market for both for now, but as more and more publications care less about the equipment used, the upper side of the market is becoming more and more specialized, and more and more narrow. But the smartphone shooters, with the constant improvement of phone cameras and optics by the likes of Sony, Leica, and perhaps Olympus, are growingly getting the attention of modern, trendy publications out there. And if anything can be predicted at this moment, it is perhaps this: the smartphone photo community will continue to grow dramatically, while the high-end photo gear community will continue to narrow. Two markets, two products, and no doubt where the real growth will be, not to mention where emerging digital consumers will be spending the big bucks. Decisions, decisions.

I mean, but how many cameras does one person need? Not everyone is going to always buy the latest and greatest feature camera that comes to market each year. IJS

Smart phones are great in ideal conditions. In poor light or artificial lighting, give me a real camera with a big ass lens.

Actually, I think the Pentax DSLR release is brilliant. Who else is releasing one when there are still people out there who want to buy one? Though only if Canon or Nikon was the one who did it, it'd sell much more.

Funny to see an article about the sliding Japanese camera industry (CIPA is Japan oriented) illustrated by a couple of Leicas ;-)

However, this article underlines a long-ongoing trend that actually bears some good news as well. With the true volume business out of the way (except for Fuji's Instax ;-), camera manufacturers focus on the high value market. Less units, but more margin per unit. That will force companies to downsize (which a/o Nikon did) but as long as most camera manufacturers are part of larger corporates (Sony, Canon, Nikon, Fuji, Panasonic...) they'll be ok. At the same time, the lower volumes and higher prices allows for smaller companies to take a larger market share, provided they have a good product (e.g. Leica). Olympus could be there as well. As for Pentax, I fear. Ricoh doesn't seem to have a plan for Pentax and in a market like this, you won't survive without a plan.

After watching this https://fstoppers.com/video/videography-shootout-between-iphone-12-pro-m... I realized that my experiences with my outdated iPhone 10S are not a great way to judge the potential of phones for stills and video. After watching I am convinced that for consumer and some prosumer buyers, the phone will make much greater market penetration in the near future. My next camera may be an iPhone.

They're all luxury items now, and companies will have to either adapt to that fact, or die.