Living in the Days of Pretend Big Productions

We live in interesting times when everything is expected to look good, show high numbers, and have flashy abbreviated job titles. What actually lies beneath the shiny plastic cover is often something rather humble.

There is an assumption that behind any great looking visual product, whether it's a still image or a moving picture, is a big team which looks like a complex machine full of small cogs, chains, and levers, each having a simple job, but done with diligence and in synchrony. You look at a great shoot in a magazine and, as you expect, there is a long credit list of people who worked on that. You watch a two-hour film where the last 10 minutes is just the credit list. You go through the Instagram profiles of several famous photographers or filmmakers and you see that their number of followers ends with a "K" or an "M."

First you have to start working on projects that require a bigger team of people. You may be poor, but you can ask friends to work for free. They may not be that qualified, but at least they have different names. The long list is all about different names and different job titles. It looks amateur when you have a project where all jobs in the credit list are taken by one person: you.

This is why a variety of people is the mandatory ingredient you need to look like a big production. A starting vlogger who just made a YouTube channel about make-up can be your make-up artist. The neighbor can be your key grip and their children can be the rest of the grip department. You don't want to have your make-up artist to do hair; that looks like a small production. Ask another person to do that, although they only put some hairspray and comb your male actor's short hair. It's all about the long credit list.

What else? The director's position is reserved for you, of course. You need an assistant that will be your 1st AD (director's assistant). That's the person you asked to send text messages to the whole crew. They may not show up on set, but you have an AD in your list. You need a 1st AC. That's the guy who will pull focus on your 35mm lens, put on your small mirrorless camera which is set on autofocus anyway. You need a camera operator who will press the "Record" button on the camera which will be on a tripod for a few locked-off shots. The location will be your parent's house which automatically reserves your mom the position of a "set designer." In the credits list she's going to be with her maiden name, so nobody suspects family relations. 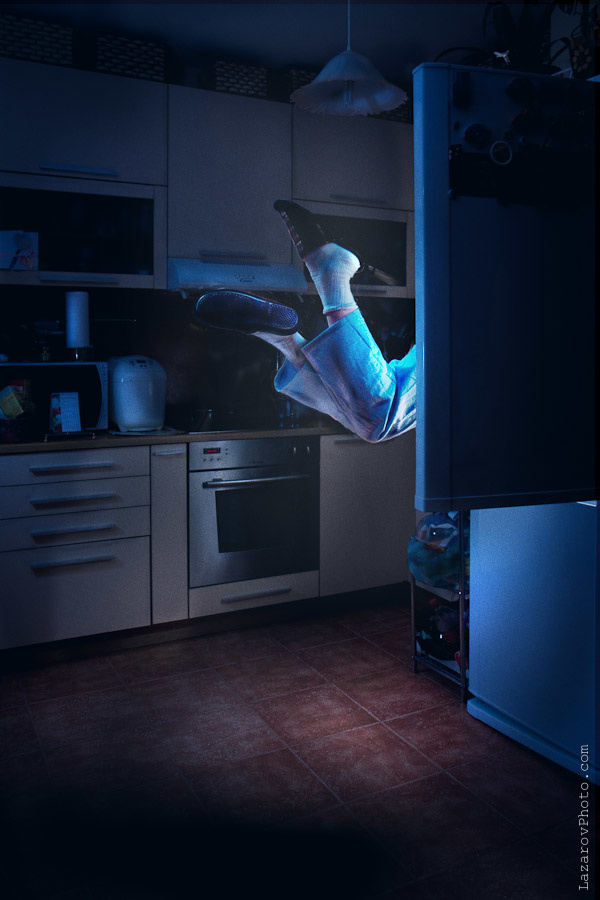 Here I photographed myself in my kitchen.

Have someone shoot behind-the-scenes footage of your production. That will give you one more name in the list. Don't forget a few selfies around a tripod, a light, a monitor. Ask anyone from the team to send you any image they shot during the production, even these of the neighbor's cat.

And there you have it. A long credit list. Does the end result look good? It should be. It's a big production after all. If someone dares to say the opposite, show them the credit list. Tell yourself that even Hollywood productions have their harsh critics.

You may have only two projects in your portfolio, but your Instagram account has at least 180 posts (that's a scientifically-proven minimum number). Don't forget the neighbor's cat. This shows you're having fun on set. Now that you have the posts, it's time to bump up the number of followers. Just be pushy. Don't be afraid of rejection. Ask all your for friends, relatives, and colleagues to become a followers of you. Ask anyone to follow you by putting your request in the comments under high-traffic unrelated posts anywhere on the Internet. For example, there's a beautiful girl posting about her new make-up and between all the compliments you put "Great post! Please check my portfolio! @your-business-name-here." Place similar comments under the work of great artists such as photographers and filmmakers asking anyone to look at your two projects. Pay click-farms. Buy followers. You have to do anything to make your numbers big. That's the key to success.

Giving High-Priced Estimates to Your Clients

In order to look big, you have to be expensive. Always talk about yourself in plural form. Don't use "I," but "we." When giving estimates they have to show high-figure prices with a long list of team members required although it could be a simple documentary-style interview. Tell them you will need catering even for a one-hour shoot. A good working team is the well-fed team, right? 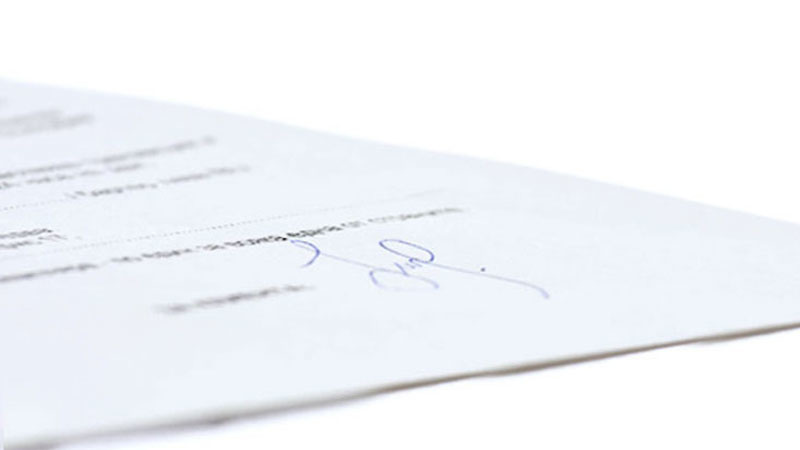 Showing Up With More Gear Than You Actually Need

Put out lights that are not plugged in and tripods all over the place. Be sure to spend some of the client's estimate on rental gear, because you are ashamed to show up with a mirrorless in a side bag. You have to look big.

Start your five-minute short film with 30 seconds of logo animations with an eight second fade-out before starting the film itself. Make sure you spend at least 20% of your time on the credit list. It has to be at least one minute long. Blockbuster-style music is a must. Make a two minute trailer of your five-minute short, starting with a director's cut (usually longer version) of your logo animation. Oh, and don't forget to you use a pseudonym instead of your name as the editor in the credits list. 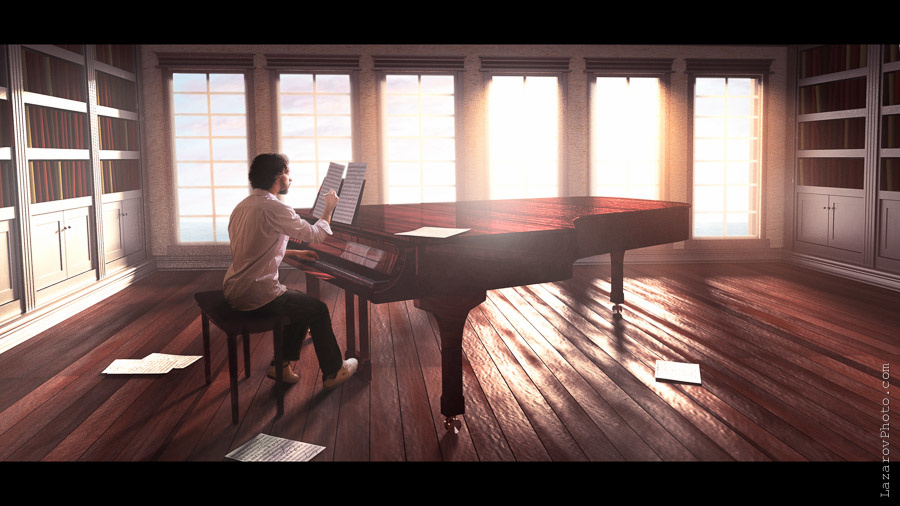 Me in one of my first attempts to build a 3D scene, so that the "location" looks big.

Although it sounds funny, that's what many people try to do to some extent. The majority try to look successful and big from day one. People are afraid to work with the same model over and over again. They feel shame to be a one man band on a project that actually looks great. They think they have failed when the number of their followers is less than the price of their second-hand car.

I have felt like that. I have tried to look big, but as years went by I found that clients appreciate the work, not the means to accomplish it. There were projects with big teams. There were projects where it was just me. My personal advice to any struggling artist out there is to concentrate on the quality of your work and forget about quantities. Hire a big team if the job demands it. Work alone if it doesn't. Be honest. Stay humble.

Gives me some hope to try a short story. Been burning in me for about a year. I will be a one man show, so to speak. I ave a family, my family I what to share. I have my script, I have technical gear and stuff. And adobe premier, PS, etc.. The set will be super simple. Can you suggest some 3D “stuff” to help me create this story, perhaps I don’t know how but gonna try, But a wonderful articulate article, Thank you so much I would like to have music like in your video. Do you know where I can lic for this one man band, not for commercial use but personally

Thanks for the nice words.

About the 3D: I would not go into 3D unless I'm desperate to. I learned to work with Blender (a free and powerful 3D software). Otherwise, you can ask some freelancer to collaborate with you on a non-commercial project.

About the music: most stock sites sell music for $20-40 (like audiojungle). For my personal video projects I usually compose music (been into that long before I touched a camera).

At some level you do expected to have a team...

You don't have to have a team if you work on a small project. If all of your projects require a team, yes, but you don't want to show up on set with 20 people for a simple headshot of a new local business man/woman (and charge the client accordingly).

If someone wants to charge that much and bring a team great. If the clients will pay that, even better.

Behind every joke there is some truth. I like your sense of humor.

I appreciate that, Leigh.

Nice one Tihomir! As always, lot of details , thinkings and arguments.

Just a quick note: a 1st AD is NOT a director's assistant - that is a completely different job. The AD runs the MANAGEMENT of the set and most decidedly WILL be on set. They represent the PRODUCTION make sure that you make your day and everything gets done. They are often at odds with the director, who is representing the CREATIVE vision. The AD keeps things on schedule and makes things happen. They are not doing little tasks on behalf of the director.

And what's the meaning of the abbreviature "AD?"