Why Now Is the Best Time to Go Pro

The world has never been more uncertain in our lifetimes. However, now is a perfect time to start up as a professional photographer. And as a pro who started in the last recession, let me explain why.

Way back in 2008, I decided that my academic career path was not for me, and I started doing photography as a hobby. I very quickly became obsessed and started shooting for magazines and private portrait sittings. I hadn’t known the heady days of the 80s and 90s, where photographers spent thousands on lunches with clients, partied all night, and had massive studios with the latest and greatest Broncolor and Hasselblad gear. The world was going through a massive recession, and everything seemed to be turning on its head. It was also the point where digital and film seemed to have some sort of official passing of the baton (I will come back to this later). But being at the beginning of my journey, none of this seemed to matter. I had a very humble selection of equipment and no real overheads to speak of. Simply stopping going to the pub once a week made enough of a savings for me to pursue my hobby into a more professional career.

What Went Wrong for So Many?

The change from film to digital was hard on a lot of photographers. Those who didn’t move with the times and were also not household names were left very quickly behind. What clients wanted was changing, social media was just beginning to take hold, and the way in which commercial and wedding photography was conducted had changed beyond recognition. Add into this the fact that commercial photographers' clients were going bust or cutting back massively, and you had a bit of a melting pot situation. The old way of doing business had big overheads: large studios, expensive equipment, huge rental bills, and massive crews. Those with real depth to their business could weather the storm, but the majority went bust as their cash flow dwindled and their clients dried up. 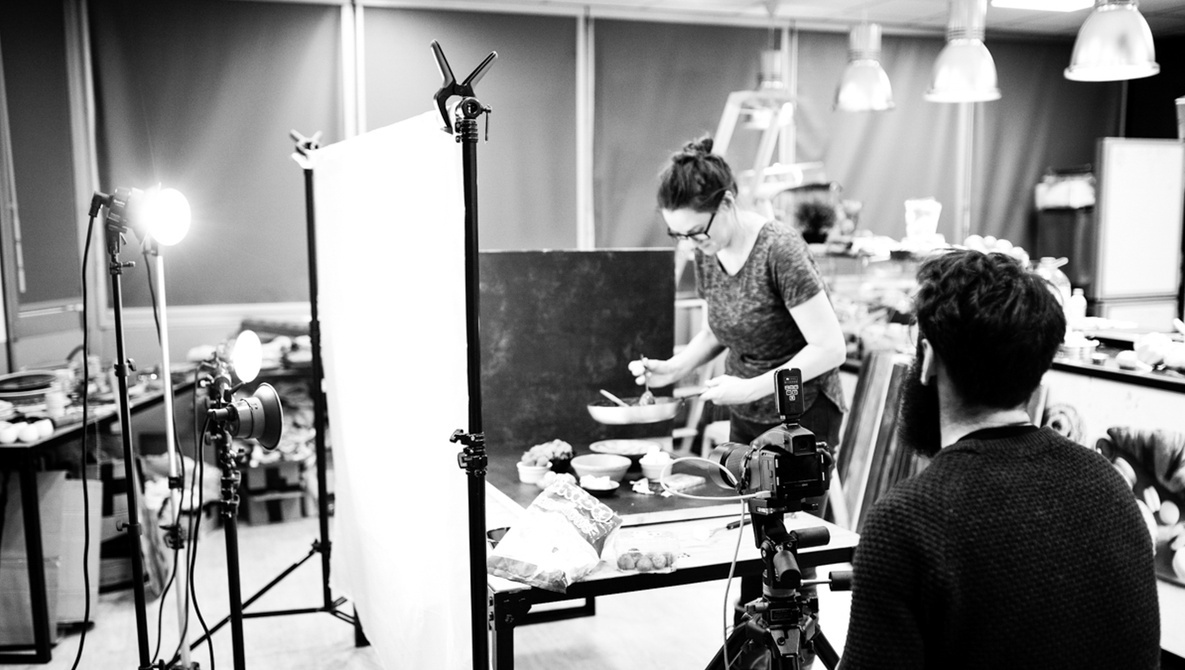 How Does This Relate to Today?

Now in 2020, we are facing a similar if somewhat scarier plight. The photography business is also changing beyond recognition. Firstly, the equipment has become incredibly affordable. For many, Chinese off-brand lights, a used full frame camera, and a few lenses are enough to set up a six-figure business. But there is also the diversity of income streams. Those photographers who were purest and decided that real professional photographers only shot stills are going to suddenly come unstuck. Those who have headed down the new path of diverse income streams from YouTube, writing (hello), rentals, stock photography (not the likes of Shutterstock), videography, and workshops will suddenly find that they are far more comfortable, likewise for those who purchased gear outright and more than likely purchased it used. For those who racked up debt on expensive new equipment, they are going to be really feeling the pinch right now. Even when those cameras are collecting dust on shelves, they will still be paying for them while their reserves start to be depleted.

How Should You Use This Information?

There is a lot to learn when it comes to starting a business, but from the two above examples, the ability to pivot is key. I myself can often be a bit of a luddite and become stuck in my ways. However, as soon as everything shut up work-wise due to the pandemic, I set up online portfolio reviews and started writing and creating more YouTube content. Once we could shoot again, I talked to my agent and began to work out how to cut production costs while maintaining the same level of work, which was done by making my 8-hour days become 12-hour days. I was about to spring for a new medium format camera and IT suite at the studio, but that money will now be left in my accounts with smaller upgrades being made to my IT systems, and my camera setup remaining the same. Buying anything right now that is not 100% vital to produce a job just isn't a good idea. Renting for those odd niche items will become far more popular going forward. No one wants devaluing equipment sitting in a case when they could have that cash in their accounts.

If I Were Setting up a Business Today

So, if you find yourself in the position of thinking about going pro today, here is what I would do.

Firstly, keep those overheads down. If your camera was made after 2008, it will be absolutely fine. If you have either some fixed aperture zooms or any prime lenses, they will be fine. Avoid taking on premises if you can rent the studio by the day where you live. Sadly, this is not an option where I live. Otherwise, I would dump the massive and costly space that I have very quickly. The most important thing is to build a lean and flexible business. A penny saved is far better than a penny earned. You don’t pay tax on savings, but you will lose a fair percentage on earnings. However, I think the most important advice is to be flexible and make sure you have a clear plan, but don’t be afraid to make u-turns when it is the right thing to do. I told myself last year that I wouldn’t teach again because there wasn’t enough money in that part of the industry, but as soon as lockdown hit, I was teaching.

The industry is now focused on creativity, not technical ability and equipment. Automation is so good that the focus has shifted. You can make a career as a photographer using just your phone. It is important to remember that as photographers, we are creatives and that our main reason for doing our jobs is to be creative. There are jobs out there that require our technical expertise, but they are becoming fewer and fewer. With new social media apps popping up like TikTok, there is going to be a huge shift in videography and the way that brands want to talk to their audience, so we all need to be ready to fully embrace the vertical video (if you haven’t done so already) and learn how to create what the public wants and not what internet forum photographers want. So, much like when photographers were left in the dust in the film days, we all need to avoid being left in the dust as the photography industry changes from us being photographers to creators.

Business / June 17, 2020
Your Most Important Skill as a Professional Photographer Has Nothing to Do With a Camera

Education / June 2, 2020
Why So Many Photographers Get Into Education

Advertising rates for electronic media is literally a fraction per impression than the rates for print once was. Advertising rates underwrite editorial budgets. Literally hundreds of magazines have folded in since you state that you entered the market. I'm not sure if I can name one electronic magazine that has started in that time which is anything more than a vanity exercise.

I would note that any business whose revenue drops due to a business model change has an overhead issue.
Those can be most easily be handled by cutting overhead and if necessary finding new sources of revenue.
If there are no fish in the pond, find another pond.

The marketplace is beset by three factors, fewer opportunities, downward pressure on fees, and increased competition. While overhead is a factor in profitability, the premise that overhead, especially in the transition from film to digital, is more significant or even a comparable factor to the three I stated is incorrect.

Which pond were you suggesting in still vibrant?

Your point about overhead are spot on.
I have been in business for 40 years now and in the early days financed hundreds and thousands of dollars of gear. Every day was spent in a frantic effort to generate revenue to meet the financing costs. I was pocketing peanuts.
I have evolved to a very lean operation having rid myself of my studio this year. I also gave up assistants years ago as they cost a lot and yielded no extra revenue.
What many forget when they hear of a huge budget for a shoot is that it is arrived by itemizing a long list of expenses being passed on to the client. The net is far lower.
In addition to a lower net, these "rock star" gigs take a lot of work to produce and during the production you are madly trying to land other gigs. Large projects mean more stress and fewer jobs. I have moved to a smaller but still very profitable job model that allows me to work without assistants and relatively minimal gear but to also accept more jobs annually.
Yes, older gear is perfectly good and most importantly, paid for.

There are still a lot of opportunities. One just cannot measure them by outdated metrics because we no longer work in the way the old metrics were generated.

Indy, on your large projects did the invoices reflet the 1/3 fees and 2/3 expenses equation?

Yes, but when the clients want to negotiate costs the rule of "pay less, get less" does not always work. It often meant that my fees would be shaved to some degree. Changing markets meant that this happened more and more.
The ultimate issue was the stress of working to get the next big project, keeping assistants that were reliable and paying the overhead of the requisite studio.
I have moved out of my major market area and to a second tier market. Clients are smaller and less experienced but I can still generate a decent income but without the hassle and stress of running an organization that so often seemed to be running me.

When you say that you turned your 8 hour days to 12 hours days, does that mean you did so at the same rate? If that’s the case, do we just have to concede to the situation and give more for less ?

Never really had 8 hour days, ever since I began as an assistant it has been 10 hours. I hear the video /motion biz iz pushing 14 as a "day". Rate somewhat reflect the longer days but there is a lot competition out therefrom photogs who do not understand the value of what they are producing.

Thank you for this article I have been giving this situation a thought because I had no examples of what peers had done during the last recessions. Thanks for sharing.

Good article mentioning the golden days !
Been in the biz for 35 years. Personally the main changes are:
Film change to digital hence clients want more per day .
Technique is much less required as apps, software etc... can do everything for you if not pay someone to do it for you .
The huge popularity of photography due to the lower cost of equipment.
The social network and internet has brought a new breed of people and the appreciation to photography is lower in some case to put in priority fees and speed of delivery.

Basically photography is not an expert profession anymore . The only thing which fortunately will hopefully always remain and separate the boys from the men will be if you have an ‘eye’! Period. Long live photography !

Now is a pretty good time to buy. The newest cameras just came out a few months ago, there's deals all over for different things, and it's not likely that you'll get ...
https://apkxyz.com/apk/showbox-apk