Photographer and historian Marc Hermann has done a beautiful job pulling historic crime scene photos from the New York Daily News archive to blend them with photographs of the same locations today. For those who live in New York now, it may be easy to forget just how rough the city was in the not-too-distant past.

Grisly violence is an undeniable part of New York's DNA and the juxtaposition of the old, black and white images with the modern "Times Square" version of what most people expect today is incredibly fascinating - truly making ghosts walk amongst us. 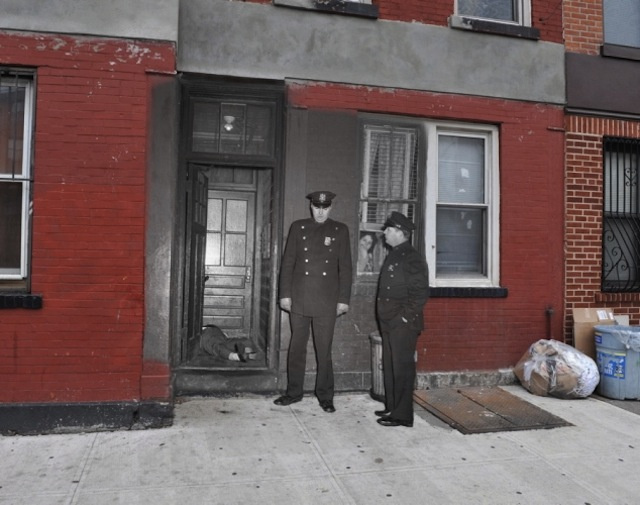 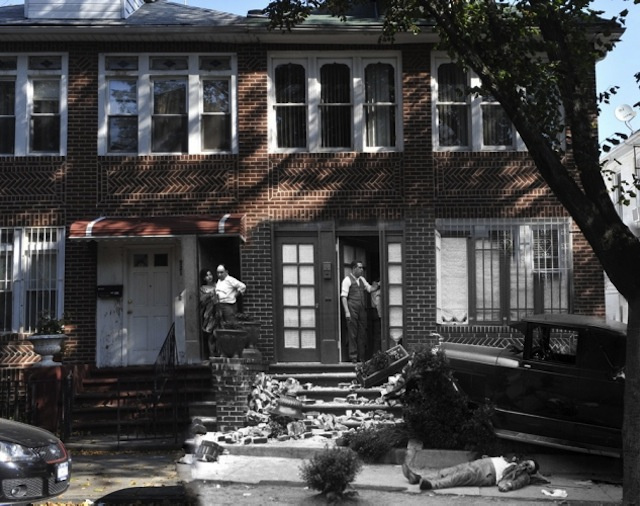 Brooklyn, N.Y
The tree that stands in front of 923 44th St. in Brooklyn is the only living witness to gangster Frankie Yale's untimely demise on July 1, 1928. Yale's car slammed into the steps of the Brooklyn home that day as he was shot to death from a car driving by. 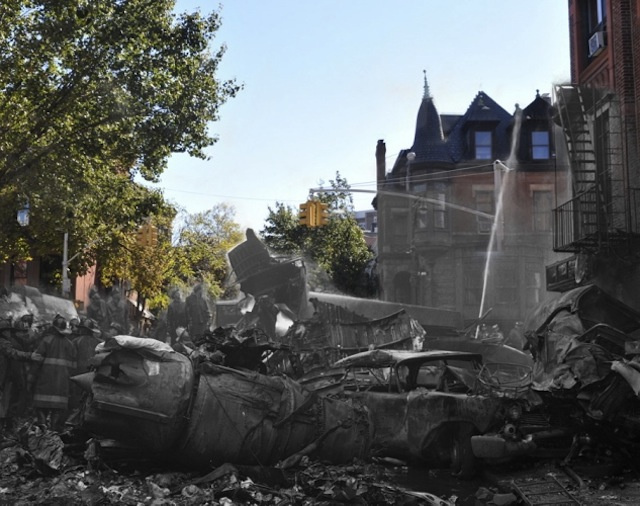 Park Slope plane crash in New York City
The wreckage after the crash of United Airlines Flight 826 and Trans World Airlines Flight 266 over New York City was well documented by the Daily News back in December 1960. Over 130 people were killed aboard the planes and on the ground in Brooklyn, making it one of New York's most tragic disasters. The crash also destroyed some buildings beyond repair. The ones that still stand can be seen in this compilation. 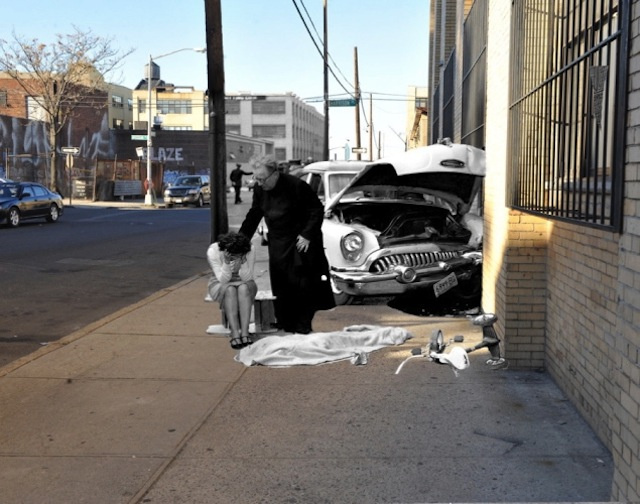 Porter Ave. Brooklyn, N.Y.
Only a few scars left on the side of this building serve as a reminder of what happened here on April 4, 1959. Three-year-old Martha Cartagena was riding her tricycle when she was struck and killed on Porter Ave. in Brooklyn. 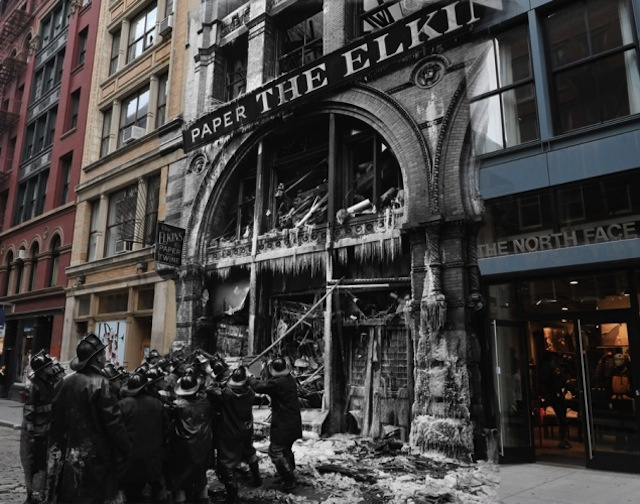 137 Wooster St. Manhattan, N.Y.
Back in the 1950s, there were no North Face storefronts to be found on Wooster St. There was, however, a massive and fatal fire at the Elkins Paper & Twine Co. on Feb. 16, 1958. Six were killed by the blaze and the building was leveled, but new commercial space now stands where the Elkins Paper & Twine Co. once did. 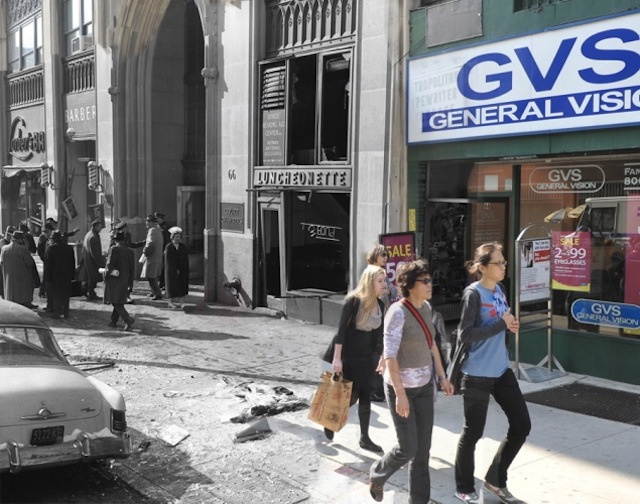 Downtown Brooklyn, N.Y.
Passersby of 66 Court St. probably have no idea that a massive gas explosion once blew out the windows of this building on Jan. 31, 1961. Over two dozen were injured by the flying glass and falling plaster. 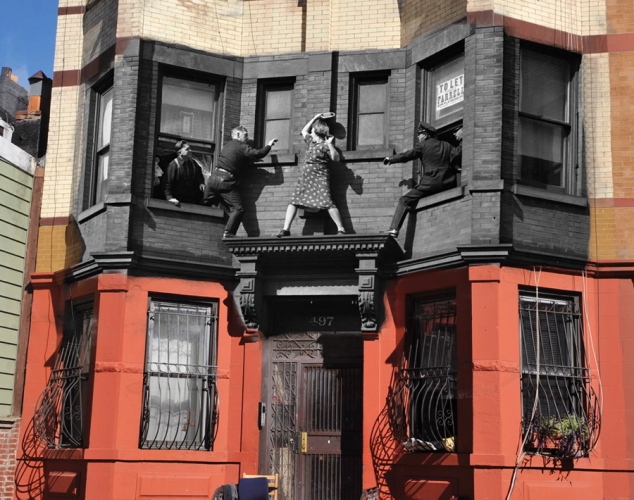 497 Dean St. Brooklyn, N.Y.
New York City's rich photo history has been well documented by the Daily News through the years. Many of the places, stories and lives lived by New Yorkers who have come before us are still alive and well, but locked in photography archives. Marc A. Hermann, historian of the New York Press Photographers Association, has juxtaposed then and now photos of New York City, bringing back to life people and stories of the Big Apple's past. Check out some of his amazing work ... March 19, 1942 is a day well captured in the Daily News' archive. Edna Egbert, who lived at 497 Dean St. in Brooklyn, climbed onto her ledge that day. The News captured the distraught woman fighting with the police as she wobbled on the edge. The building is currently painted red, but remains nearly identical to the way it looked 70 years ago. 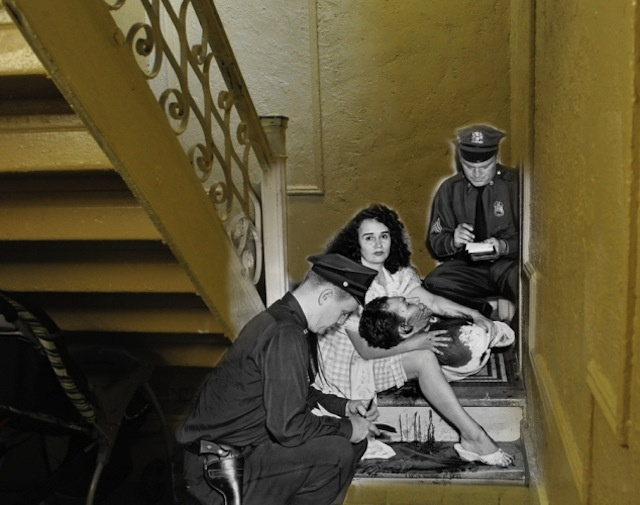 992 Southern Blvd. Bronx, N.Y.
A classic case of jealousy. In this stairwell of 992 Southern Blvd. on Sept. 25, 1961, James Linares lay bleeding in the arms of his girlfriend Josephine Dexidor after being shot by her husband. The same banister still scales the length of the hallway. 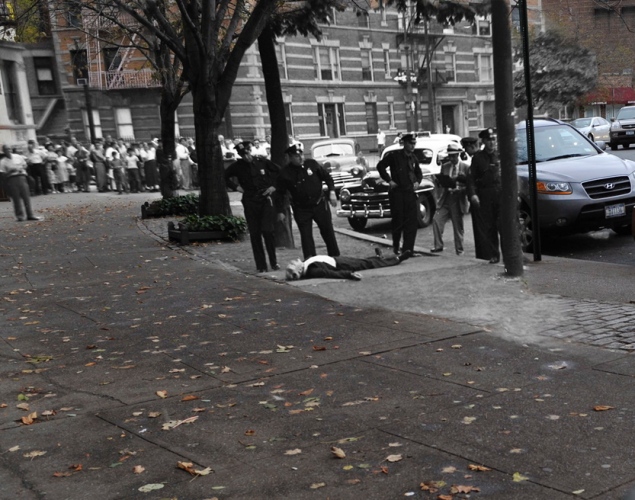 Prospect Park in Brooklyn, N.Y.
Sunday strolls are still popular in Prospect Park, but on Sunday July 30, 1950, this usually quiet neighborhood was shook by the suicide of Detective Michael Dwyer, seen here. 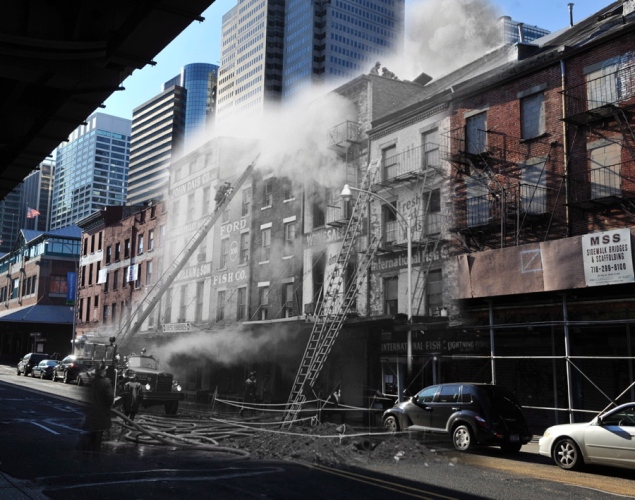 Fulton Fish Market
The Fulton Fish Market in the South Street Seaport was rocked by a fire on Feb. 26, 1961. These buildings still stand, in various states of occupancy, and minus a few floors here and there. 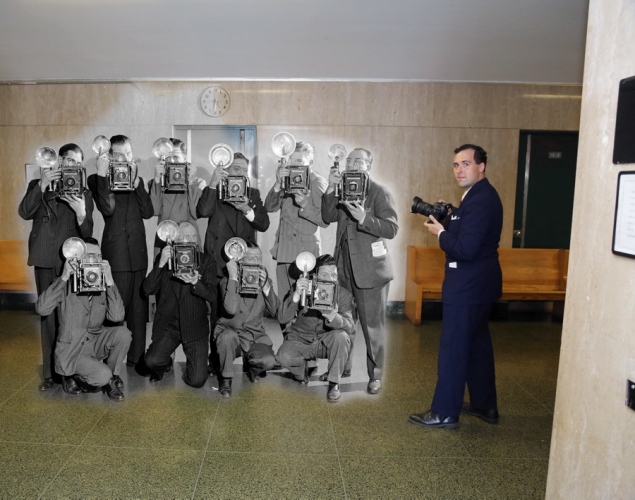 New York City photographers
Here, Marc A. Hermann (r.) and his colleagues of 70 years prior get caught in a rare moment on the opposite side of the camera lens. Hermann began this photo project because of his love for history and it has since blossomed into a series that reminds us all that there has been bustling life in the Big Apple for decades. "New York is constantly changing and transforming, and tragedies that affected individuals' lives are forgotten. We may stand on what was once the site of a horrific murder and not even know it, simply because life goes on," says Hermann. Now you can relive these historic moments in present-day. 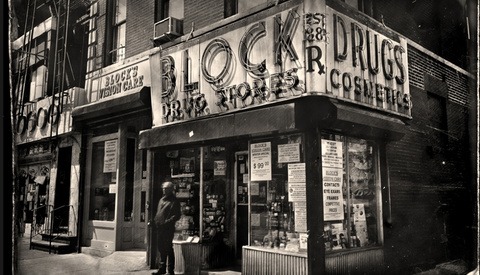 Documentary / November 18, 2014
Is This The Most Unique Camera Setup In New York City? 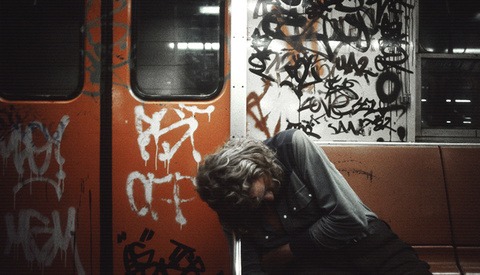 Photojournalistic / February 11, 2014
Back In The Day – The New York City Subway In All Its Former Glory 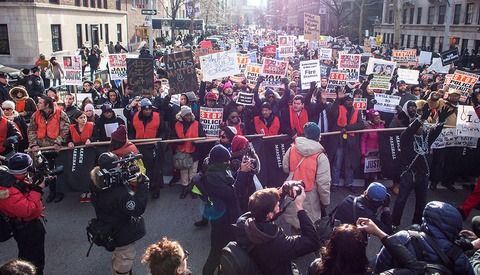 This is so cool!

This has been done few times with WW2 photos as well, with interesting results - http://www.boredpanda.com/ghosts-of-war-wwii-photos-blended-into-present/

Also a cool take on the concept is dearphotograph.com where people hold the original photo in front of the camera in such a way that they align with the present location within the shot.

can you do ironton ohio old and new pics together that way,those was some great pics

Some of these look great, others, not so great....nice concept though

This is veryyyy cool!

I want to know why the older woman was on on the overhang fighting off the cops - I am sure it's a great story!

tempted to do this for my hometown, very nicely done! Curious who was driving the car that killed that little girl, what a sad scene.

It's cool, digging on these visual 'tracers' of the past, somewhat overlapping the geographical/architectural/car &amp; clothing styles, of our current space in time. Where does the edge of before touch the 'present', you dig?

This is really cool!

Old concept...... snuff photos, disrespectful of the dead and families involved. show some morals and respect

Other moments in American History: https://www.facebook.com/DreamsOfMyAmerica

I can't believe the bickering between you people. These images are not meant to be technically superior or original works by a photographer; they're meant to evoke a feeling of time and place with historical value. Don't some of you have better things to do than point out to others how you could do a better job? Ridiculous. I think Marc Hermann did a great job recounting the events of long ago as viewed through modern eyes, mission accomplished.

Neighborhood was shook? You do English good.

So, so cool. Thanks for sharing!

Where is this "graphic?"

Awesome to day the very least! I could look at your photos/art for days!
Amazing and breathtaking, thank you for sharing with the world.
This would be something I would show in my home.

This is So Cool!!! did the original photographers get credit to :P