A photographer has built his own DIY ultra-large format digital camera from scratch. The rig uses a 600mm f/9 lens and has a projection area of one meter, making for some crazy images.

Tim Hamilton, a photographer and filmmaker from New Zealand, was inspired to build this monster rig after he saw a similar build online by Alexey Shportun. We recently interviewed Shportun about this setup in the article How To Get the Large Format Film Effect With Any Digital Camera. Shportun’s rig is essentially a DIY large format camera, but the film plane has been replaced with a white matte screen. This allows the lens to project the image onto the screen, which is then photographed by a digital camera looking through a hole in the front. Think of a camera obscura that’s been altered to take digital shots.

I interviewed Hamilton about his ridiculously huge camera and he shared his experiences making it with co-creator, Lexy. He explained they were eager to create an even bigger and crazier large format digital camera, especially as they were looking for new creative techniques for an upcoming project. Hamilton had recently come across an old enlargement lens. It was a 600mm f/9 Rodenstock lens and was originally used for making newspaper enlargements. Rather than let it sit and collect dust, Hamilton decided it was perfect for a large camera build. 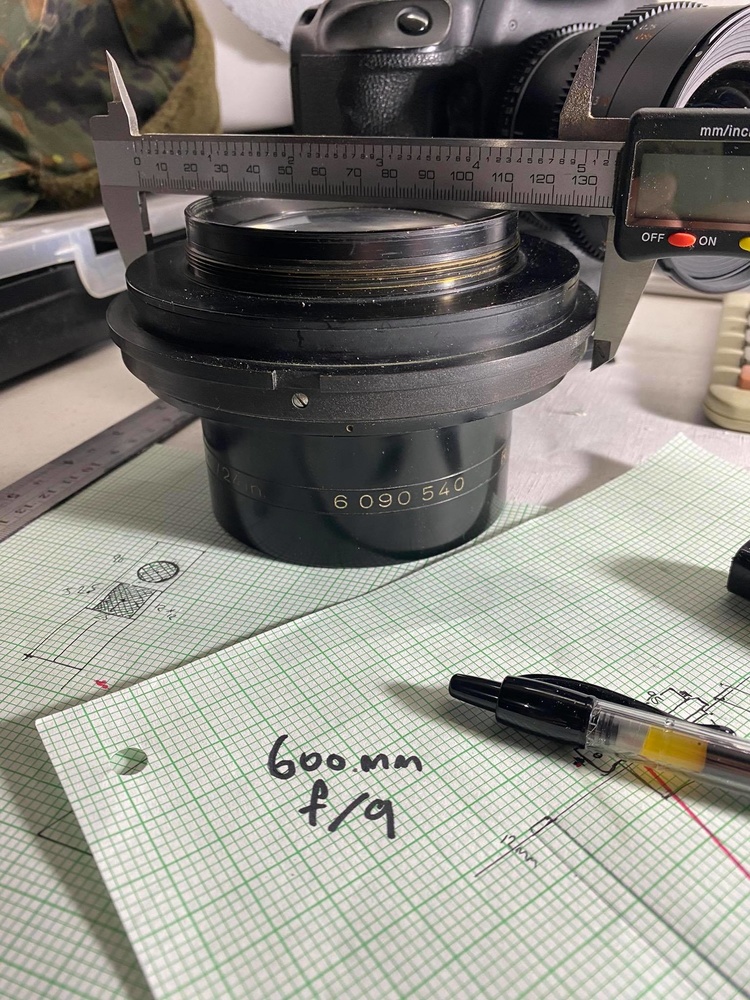 They began this bizarre experiment and gathered all materials necessary. Looking rather crude, the rig was put together using various pieces of wood and scrap metal with lots of glue. They found all of the materials nearby, so the cost wasn’t really a problem with the setup.

The design is relatively similar to Shportun’s large format camera. Hamilton did use a white matte screen as the projection area, the whitest one he could find, however, this area spans an impressive one meter in width by 80 cm in height. With an area that large, the 600mm lens becomes equivalent to a 35mm lens. This gives you the crazy compression effect that a 600mm lens would give you, but with the viewing angle of a 35mm lens. It is so large, in fact, that when a subject is in a close-up shot, the projected image is actually bigger than the subject themselves. The results look very otherworldly and certainly different from what I’ve seen before. 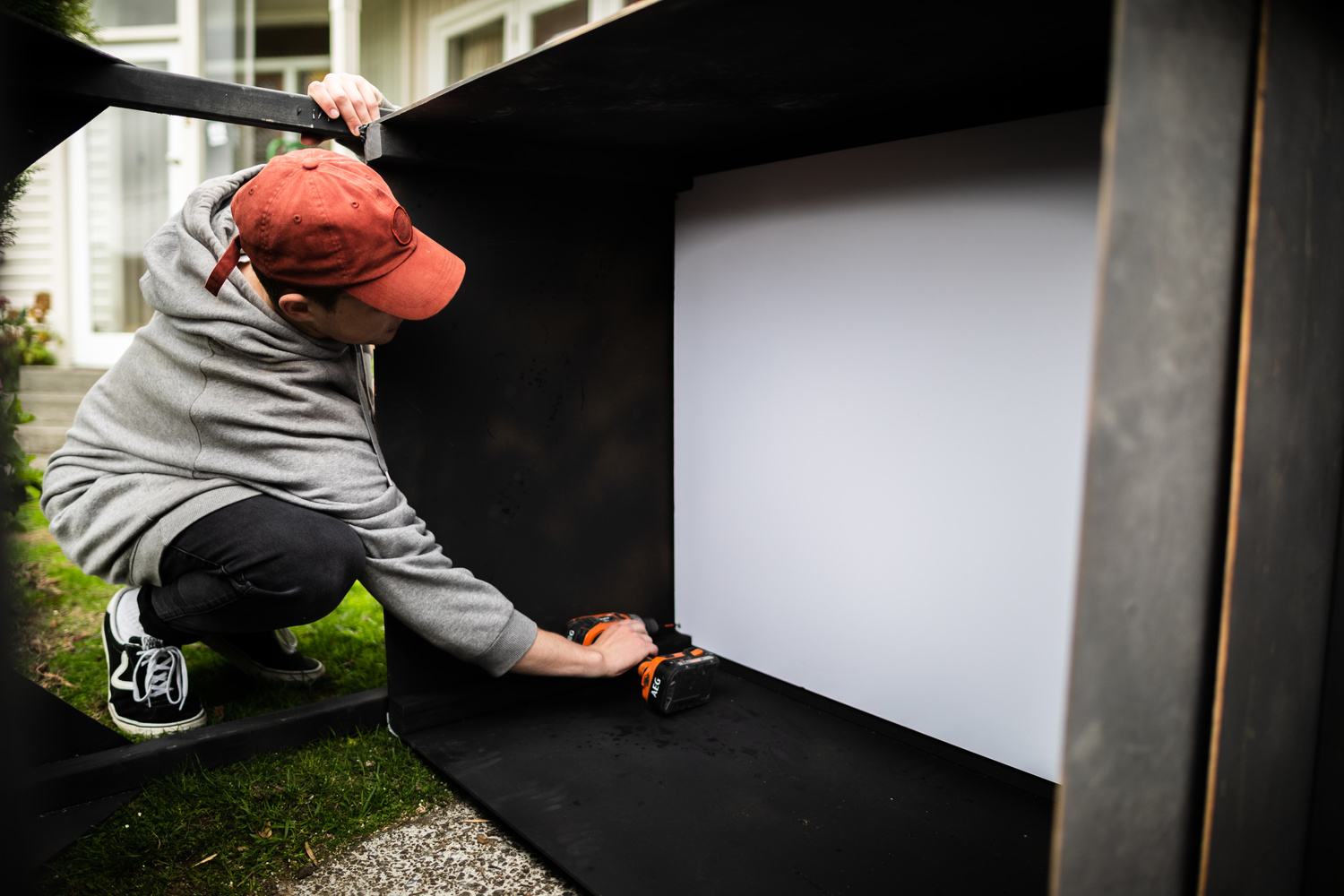 Hamilton said the focus from the back of the lens to the white screen was one meter. All of this was encased in a box that was painted jet black, with the only holes being for the lens and digital camera.

Just like a traditional large format film camera, the setup is basically a big box with bellows and a lens. The bellows, which are towards the front of the camera and are used to focus, enabled Hamilton to focus incredibly closely. The close focus is so impressive that you are actually limited because the camera is so large it gets in the way of the light, making your subject too dark.

The digital camera in question was the Canon 1D X, which Hamilton already had laying around. He attached this to the front using a simple ball-head mount, with the lens peeking through a hole into the setup. 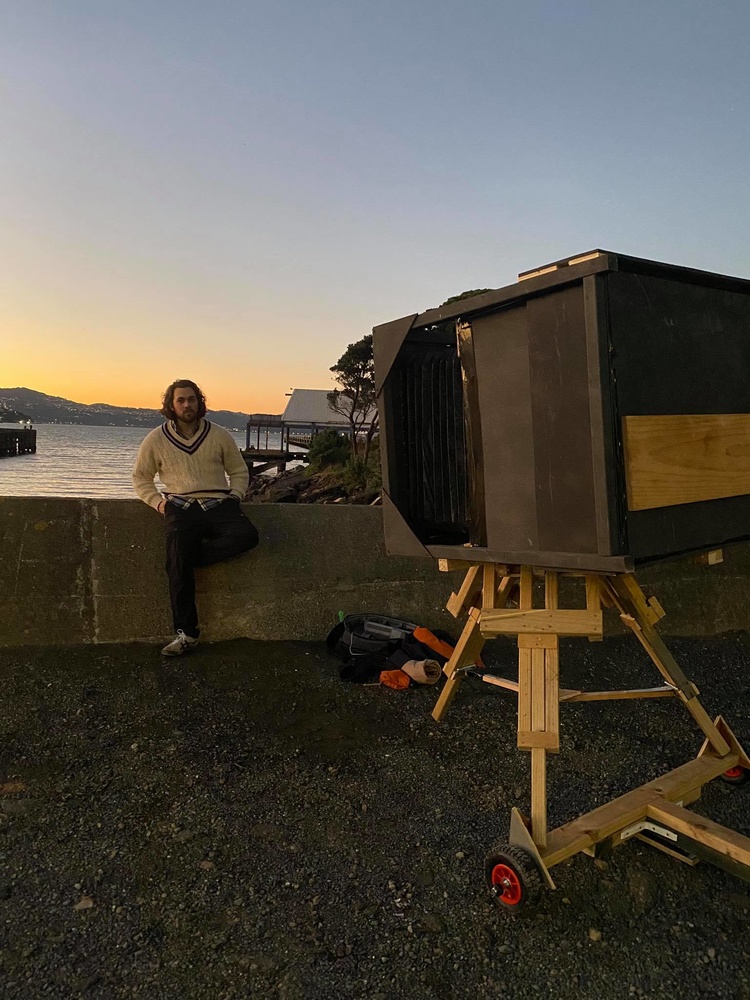 After a lot of work and customization, they took the newly built monster camera out for a test drive. The final images certainly had a unique look to them. The strong compression of the 600mm lens is apparent, and it gives the images an interesting feel that’s almost otherworldly. They do, however, seem to be lacking in quality, especially when you compare them to high-resolution scans of 8x10 film photography, which can be over 700 megapixels in size. While the lens appears to be sharp in areas, the overall sharpness seems to be weakened by something in the pipeline. 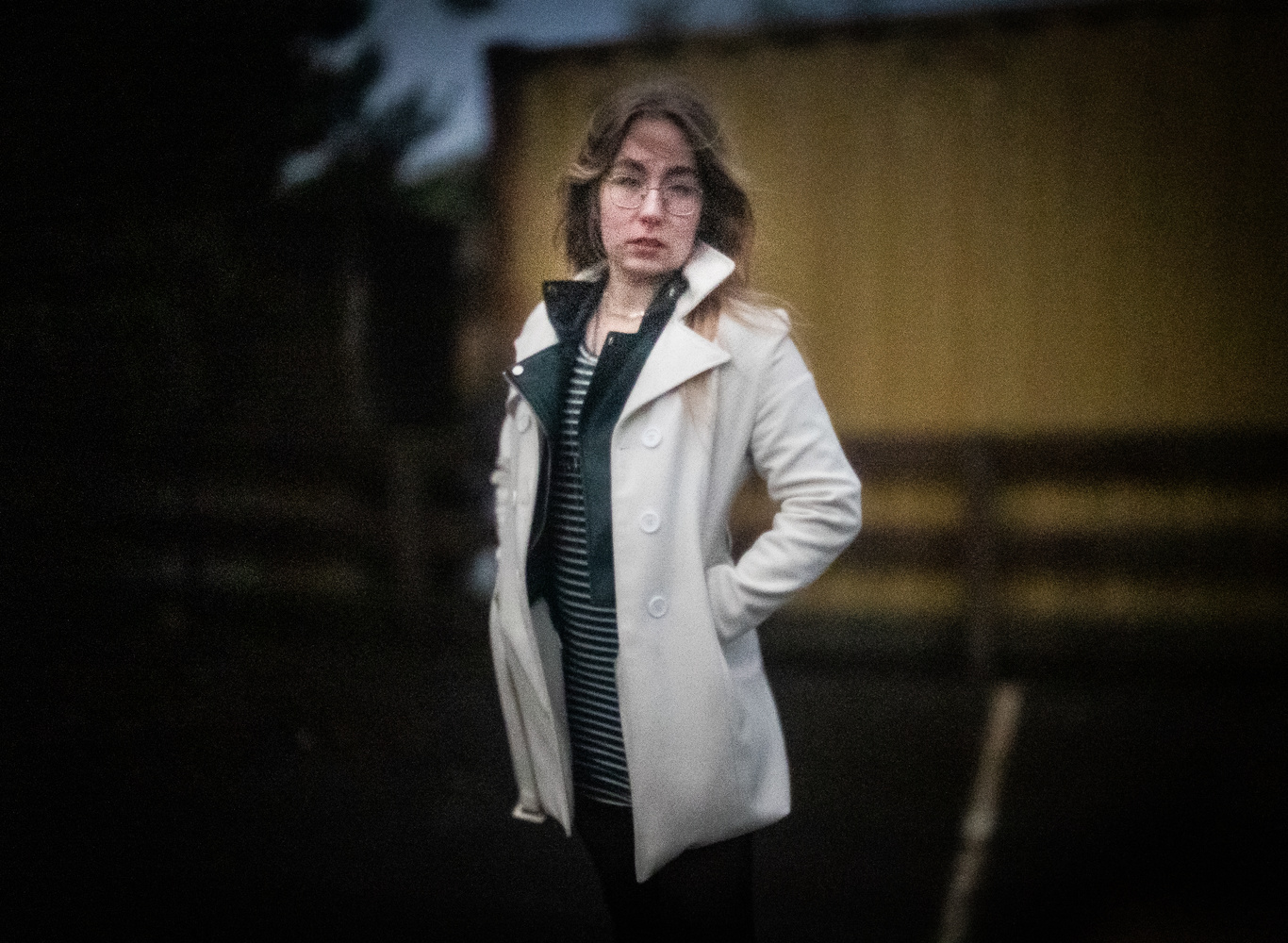 Sharpness is not everything, though. The overall feel that this setup produces is something different and the textures are reminiscent of film photography. It’s clear a great deal of the visible grain you see is actually texture from the white matte screen, not the image itself. An added benefit of using a matte screen is the highlight bloom that is possible, which can be seen in the image below in the model's hair. 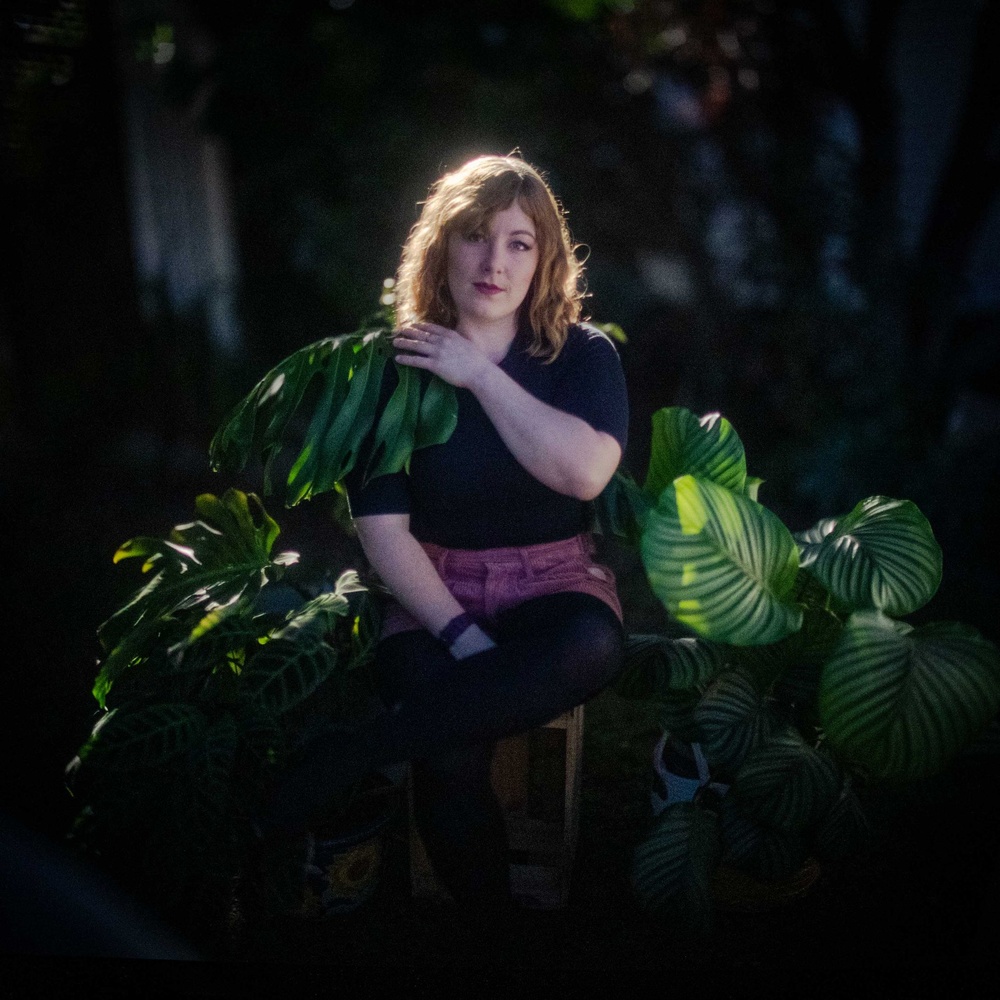 The biggest challenge was simply getting enough light in order to see an image. Hamilton explained that due to the time of year in New Zealand, the sun only shines for a mere few hours. This was not exactly ideal, as the camera itself needs a huge amount of light. As mentioned, the lens' widest aperture is f/9. Combine that with the added light-loss of the projection inside this giant black box against a white screen, and some serious light power is needed.

Furthermore, Hamilton did not want to disturb traffic during the day, blocking the roads by wheeling this giant monstrosity around. Instead, he and Lexy went out during the night when no one else was around. They managed to get some results from using what seems to be street lamps; however, they tried again using stronger lighting and got some nice images. Of course, the sheer size of this thing was a frequent challenge for Hamilton. He explained that the rig was so heavy that any normal tripod he put it on broke. He said the legs would bend under the enormous weight. Therefore, after some hair pulling, he built his own tripod completely from scratch. This was then placed on heavy-duty wheels so he could move it all around.

Finally, the last challenge was to keep everything framed and in focus. As he was working with two lenses pointing in opposite directions, it was important for him to adjust as he went. Similar to Shportun, Hamilton needed to focus the large lens onto the subject, to then focus the digital camera onto the white screen. 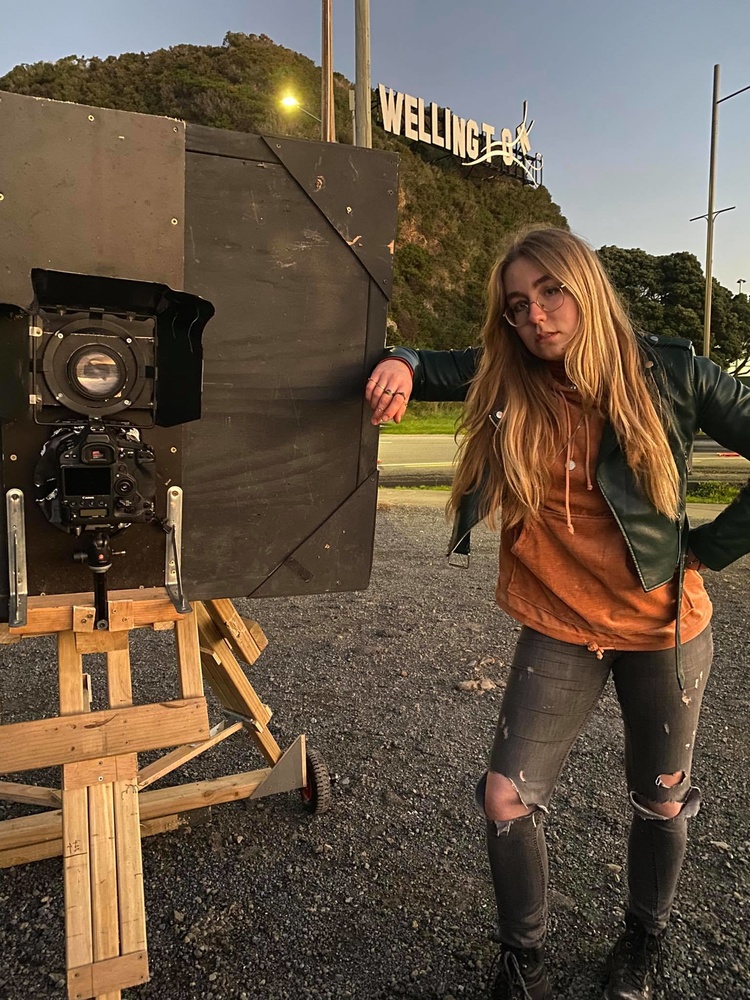 This was not Hamilton’s first experiment with DIY and combining digital with large format. When he was a teenager, he experimented with building a large format camera that used a flatbed scanner as the film plane. This essentially gave him a large digital sensor attached to a box with a lens. However, the image took a long time to take, as it would have to slowly scan from one side of the image to the other.

Hamilton hopes to take this camera out more during a brighter time of the year in New Zealand. I believe there is a lot of potential with this design; it just needs that extra light to reach its full potential.

Along with being a photographer, Tim Hamilton is a VFX Artist and Picture Editor for Pow Studios. You can follow his work on his Instagram page and co-creator, Lexy, on her Instagram page. 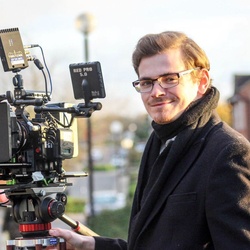 Cool project. But let’s not blame the sun for struggles! New Zealand is not Antarctica. Wellington had 9.5 hours of daylight yesterday.

That's some vignetting there... Cool project, but the bokeh looks like the Google pixel

So the lens used doesn't have sufficient circle of coverage and then the result is photographed with a dslr?? Why?