Documentary movies and photography aim at creating plausible images of certain events and phenomena. But what is plausible? Can we even catch an unaltered scene?

Do You Believe in What You See?

Apart from selling their work to someone, documentary photographers and filmmakers aim at creating an insight into certain parts of our world. Culture, historical events, public discourse, family, politics, street life, and natural events are just a few things on the list. Basically, documentary makers can document everything. I made documentaries about beggars in my city, about rituals at Sufi shrines, and about social mobility for the lowest caste in the Indian society. It is a struggle to not be biased and most of all, to make the participants feel comfortable and behave naturally.

Documenting diverse and debated topics includes a high amount of responsibility. Photographers and filmmakers do not only reproduce and document events. By publishing their work, they also become part of a debate. Every point of view that they choose in their images communicates something. It is impossible to be completely neutral and objective. Rather than creating objectivity, it is thus important to create a plausible image of a certain situation. The point of view of the documentary photographer or filmmaker has to be trustworthy. It is important that we can believe in what we see. Even though the person behind the camera might find a very specific angle and is emphasizing some parts, it needs to be believable.

How can we trust a person behind a camera? We don't know him or her. We can try reasoning and analyzing if the whole work seems to be well researched or if it leaves blind spots. In the end, the story has to feel authentic to us. We trust in people if we have a good relationship to them. Being caught lying or assuming that the other person wants to deceive us will harm the relationship. Once trust is broken, it is hard to recreate it. In German, we use a proverb which will probably leave the reader with a twisted tongue and not really enlightened, so I will simply use its translation:

A liar won't be believed, even if he talks the truth.

How is this connected to documentaries? Well, if you watch a movie or photographs, you do not want to feel like the creator is trying to trick you. You do not want to see staged images or misleading information. You want to get insight into the real world. If you don't get that, you will soon turn the whole thing off or leave a negative comment. Fake news has become a big debate all over the world and has led to a loss of trust in media.

The Fly on the Wall

Recently, I watched an anthropological documentary. It was broadcasted in one of the bigger channels for documentaries. The images were amazing. The story was plausible, but all the time, I thought to myself: "How do they get these images?" Cultural practices were filmed from different angles, the sound was perfect. I realized: It's simply not authentic. Some scenes must have been staged or repeated. There must have been a big team on location, which is yet invisible in the images. The setting seems to be a remote, quiet, and lonely place, but actually, there must be a bunch of people around who do not belong there.

I have nothing against staged scenes. Sometimes, you have to ask people to demonstrate a certain activity again. People behave differently in front of the camera. That's fine, as long as I don't feel tricked. Make an authentic image of the activity or let me know that you staged it. Making movies as if the director and his or her team weren't there and did not influence the setting might work in some cases, but no one can be invisible like a fly on the wall. Even with modern equipment and media penetrating our lives everywhere, a film team is always very present, and the participants are excited or alert to some extent.

The Advantage of Photography

Documentary movies always need presence of the camera over a longer period of time. You hit the record button, and then, you have to follow the subject. Usually, this means aiming your lens at a human being. Your camera is always there, and it is clear: you are currently shooting. The participants are under surveillance and will act accordingly. No matter how hard we try, they will be aware of the camera.

As photographers, we are also present as a person, but people might feel less intimidated. Often, our lens points down to the floor while we are talking to the participants and we can relax them. We look like we are running at idle until there is a good opportunity. Then, we get those candid moments, which will be hard to capture with a big film crew. We can choose a glimpse of a second to actually use the camera, while the videographer has to use it for a whole sequence, often from different angles.

Trust in the Subjects

Photographers might shoot staged portraits. They might declare it as staged or not. With modern equipment and editing techniques, reality can be altered to a huge extent. Many photographers have been accused to stage and edit their images to improve the composition and the storytelling. That is a different debate, though. My argument is the possibility of getting an unaltered impression of the life of human beings. Can any filmmaker be sure that his or her subjects are trustworthy? How does the camera make them become actors? Can a photographer trust them?

I do trust many images. Often, I assume that they are staged, but I am fine with it. At least they tell a plausible story. I have to get the impression that the images are at least a part of the truth. They might be an interpretation of the creator and convey a strong message. As long as I can believe that the documentary maker has a good reason for this point of view, it's fine. It simply has to be authentic. And in my opinion, the process of photography offers more space for authenticity and trust than movies do. I like both, but often watch movies more critically. 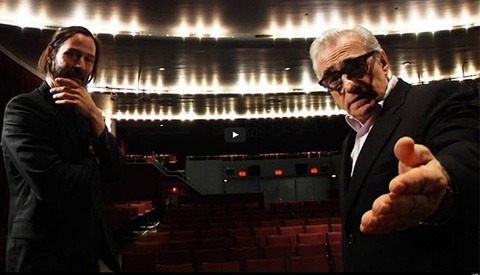 Lighting / May 14, 2021
She Dies Tomorrow: An Interview With Cinematographer Jay Keitel
Log in or register to post comments
5 Comments

"All photographs are accurate. None of them is the truth."
- Richard Avedon (not a millenial).

So many documentaries today seem biased and driving an agenda. That doesn't make them untruthful or "fake," and I realize they all need a "hook," but I still see it as a problem. Documentary photos, on the other hand, while suffering some of the same fate, aren't really expected to be as objective or thorough. They're much more "targeted," which matches viewers expectations of them. But it's not 100%. I was even surprised recently to learn that the Vietnamese girl (Kim Phuc) burned from Napalm in Nick Ut's famous photo was the victim of an airstrike by South Vietnamese forces. The photo's always been held up as an example of US involvement in the war, and while the US provided the Napalm and I assume aircraft, some truth was lost along the way. A great photo's a great photo. But if someone is expecting to learn something from it, further research is required.

I'm often reminded of a photo from John Free, where in an old soldier is rubbing his eyes at a graveyard. The photo, without any explanation, conveys the story of a veteran becoming overwhelmed with emotions at a military graveyard. In truth, he just snapped a photo of a veteran rubbing his eyes at a memorial. There were no tears. The man wasn't distraught with sadness. Just dry eyes. The story being told without context is an outright lie, because anyone who sees it will put together the pieces in the image and conclude sadness and tears.

With that, video would absolutely give away that scene to be what it was. You would see the veteran rubbing his eyes, but then seconds later stop, and continue on with very little emotion. You would be able to have more story and see that his eyes itched, or were dry.

I don't think one is necessarily more trustworthy than the other. Either medium can be easily manipulated by unscrupulous photographers/filmmakers. But putting that aside, and assuming the person creating the photos or film intends only to present the truth, is that even possible? We all have our own unique perspective. Our past experiences in life shape the way we look at each new experience, which influences where we point our camera, what we focus on, how we frame a scene or an image, what we include, what we exclude, etc.

To me, this isn't a shortcoming of documentary photos or film, it is an enriching element. As long as I know that I'm seeing the story through someone else's perspective I'm less likely to be "fooled" by an intentional misrepresentation, and at the same time it expands my understanding of the topic beyond my own myopic view.

Yes, I suppose that would be a better way of putting it. But when I get the chance to see something from a different perspective, assuming it's presented honestly, I get a little bit closer to seeing that thing as it really is, if that makes sense.