This photo series reveals how easily it is for the media to manipulate perspective with different lenses, in particular when reporting on social distancing during the current pandemic. By placing images side-by-side, the pictures show how, with the right angles, people respecting the rules can be made to appear as if huddled together.

The series stems from many of the current images we’ve been seeing of late in the media, particularly those showing the population flocking to beaches and other hotspots. Danish photo news agency Ritzau Scanpix assigned two of their photographers, Philip Davali and Ólafur Steinar Rye Gestsson, the task of capturing the images. Based in Copenhagen, the pair took images of groups of people with both a wide angle and a telephoto lens, so as to demonstrate how the same scene can look entirely different.

The proximity of people has widely been debated in Denmark in the past weeks. Danish politicians and authorities have frequently referred to images which they believed to show members of the public behaving in disagreement with the general guidelines.

He says he became aware that the agency’s contribution – that being, photo coverage of the general public – “could be misread,” and that they have a responsibility “to draw attention to the fact that images in some cases does not show the proximity of objects as people seem to believe.”

A telephoto lens, as many photographers know but the general public may not, has a tendency to give the illusion that subjects are closer together than they are in reality.

This is not an issue of right lenses versus wrong lenses. The effect that we show could also easily have been achieved using the same lens working with different angles or perspectives. But these times has made it obvious that we somehow need to make users and readers of images aware of something that only photographers used to care about. Our images featured here is one attempt at this. Another initiative is that we clarify circumstances in the accompanying captions of the images if they could be misread and thereby unconsciously misused.

All images by Philip Davali and Ólafur Steinar Rye Gestsson, courtesy of Ritzau Scanpix, and used with permission.

Journalism has shifted far in the direction of advocacy rather than attending to the duty of informing without bias.

It’s a mixture of contempt for their readership and the lure of abusing a platform’s power to influence.

Wow you sound so smart! Are you a expert in journalism?

An excellent visual example of the general issue of "faking" news by the elimination - or manipulation - of context.

Seriously! Like this image here....clearly if they stood from the side they would see all these PATRIOTS following the RULE OF THE PRESIDENT to social distance. Clearly this image is FAKED like all the other that show the protesters not social distancing. Here it is again from a second angle. Clearly just lens manipulation or FAKE NEWS. 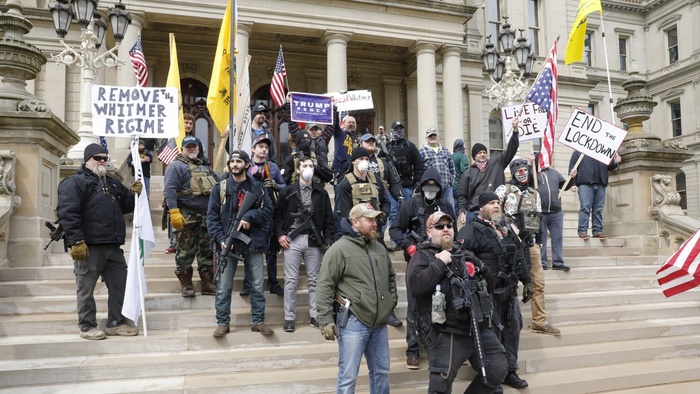 clearly those steps are six feet apart and the guys who are touching shoulders? That is just a democratic hoax of eye trickery perpetrated by the woman in Michigan!

Yes, I can see that. Also,the guns were added after with Photoshop. Has to be. I mean seriously, who in the right mind would carry a sub machine gun in public like that :-)

Go to Wikipedia and learn what a sub machine gun is before posting ignorant comment.

Edit: I am an ex paratrooper. Why don't you go and learn how to use a few before you comment.

Since you are ex paratrooper you certainly know that none of the guns in a picture are submachine guns.

What is clear to me is that for many Americans readers it is still hard grasp the notion that in different languages, we use different terms.

In my formal army (IDF) an M-16 or the, AK-47 would be classified as a rifle, a sub-machine weapon or an automatic rifle. The Uzi was more accurately classified as a sub machine gun, however, since the word 'rifle' could be used to describe an M-1 Carbine, M-14 or even a Mauser SP-66, we describe personal assault rifles like the M-16 or our own Galil (not sure if you heard of it) as a sub-machine rifle. At least I did :-)

A sub-machine weapon would be any personal assault automatic weapon that is NOT used as a platoon machine gun (like the FN MAG), regardless for weight and size.

Except some dubious Mid-East countries and a few African nations (that no one with some sense would want to travel to), no country that I know of (regardless how common guns are) would let a bunch of delusional idiots to show up ANYWHERE carrying guns, machine guns, automatic weapons or whatever you want to call it.

What the heck guns have to do with wanting to open the economy.

As someone who grew up and used to seeing guns everywhere, and trained on it from the age of 16, it is disturbing and perplexing.

In my country right to bear arms is guaranteed by constitution. Semi-automatic versions of military guns like AK's UZIs, ARs or Galils are called modern sporting rifles. Open carry of firearms is allowed in most states. Some people bring firearms to the protests to remind liberals that we have some rights given to us by our constitution including right to bear arms. In our country being stupid is not a crime.

Sporting goods eh? For me they were always a necessary evil. However, if you guys find it necessary for everyday life and you are allowed, then to each his own. Hopefully they left the ammunition at home :-) Cheers.

Clearly, this article was referring to all photos ever. Clearly.

Patriots my a$$. Bunch of crybabies. Rosa Parks was a Patriot, not those dudes.

Yes, some photos can be manipulated. In other cases people may use tele photo lens without realizing the effect. It does not mean that all these photos have been manipulated on purpose. To see the real situation, for me it is enough to go out in Barcelona during the time slots allocated for permitted walks. Majority of people do not care about keeping distance, crowds on the streets (with all the parks where people can have more space to keep distance being closed), runners who run next to your shoulder breathing hard into your face...I now go out from 6 to 7am as it is the only time when there are very few people on the streets. Later than that going out means walking in crowds and coming across too many people who do not care about keeping a distance. In even IF some photos have been manipulated on purpose to show that people do not keep social distancing, maybe in this case it will play a positive role and make some people use their brain and the situation seriously by keeping a distance or going out when there are less people outdoors.

Yan, I agree in general but trying to convince people of something you think is important by 'manipulating' imagery, quotes or facts is a very slippery slope. You risk losing credibility and actually moving people's opinions in the other direction.

I am not saying that someone (or media) tried to convince people of something. I cannot judge. However, we all know that we (people) are being manipulated by different institutions for different reasons, all the times. I just suggested not to make a generic assumption.

The article would have actual value if it exposed where the "media" actually did misrepresent reality by using certain lenses to deceive the viewer for biased reasons. That this CAN be done (like statistics, documentaries, selective quoting) doesn't accomplish much except to fuel the already paranoid.

Sounds like you're in denial. It happens even if it weren't intentional. 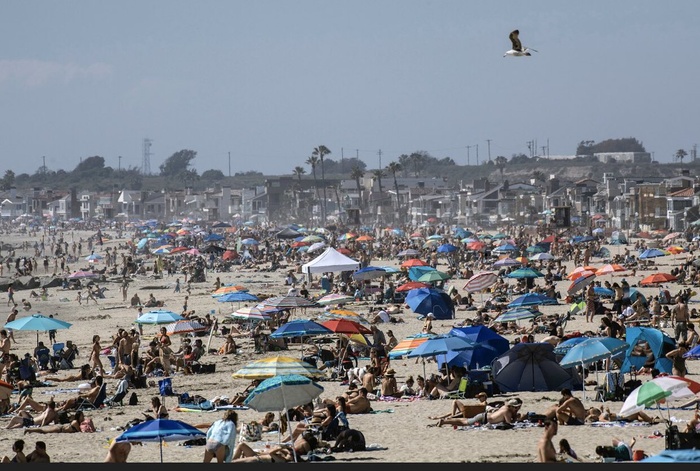 .
.
This video still capture was from the news helicopter: 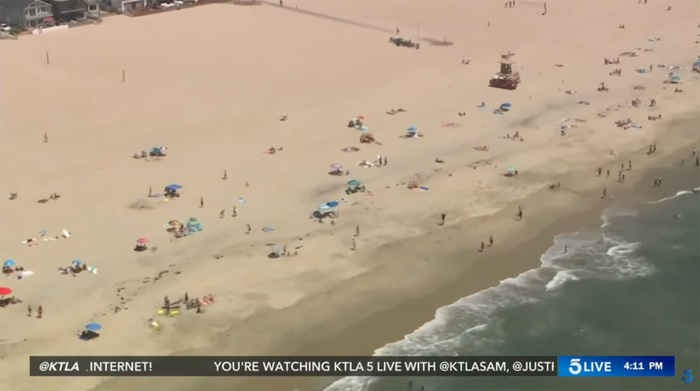 .
.
Granted, the heli shot about 2 hours earlier, they say. But, still, the first image looks like it was pre-lockdown.

Sorry but those two examples are not contemporaneous. Could THAT be deceptive???

Also. I didn't say photo manipulation doesn't occur, but that the article did not prove it.

So no, NOT in denial.

-- "I didn't say photo manipulation doesn't occur, but that the article did not prove it."

You are chasing your own tail. So, you admit photo manipulation does occur, but you want the article to show you examples of what you already know? smh All the article is demonstrating is it "can" be manipulated and these are some of the ways. Relax.

Utter nonsense. I dont need to be told that different focal lengths and different angles can give differing impressions. THAT is not news for a photography site. . SHOW how that DID happen, and you have a story worth the bandwidth. I am completely relaxed, thank you. YOU are the one making a bigger deal out of. this.

You think this site exists solely for you? It doesn't. You do realize there's all levels of experience that visit this site. Yes?

You sure are taking this article personal. You and your shouting (upper case words), hence, not relaxed.

Understand you want to change the subject, which is (see if you can follow along):Does the "media" manipulate photos because it can? The article does not prove that it does. If you're inclined to believe it, and that is all you need, good for you. But sloppy logic only works for sloppy minds.

Lol! It's like trying to explain water is wet. Unfortunately, I don't have the skills to dumb it down any further. You dwell in your own contradiction. Read your own words starting from the stop.

Oh no, not the LOL retort. Devastating. Suggest you check out "Argument For Dummies".

Oh no! Not the "[fill in the blank] for Dummies" retort. I'm so crying myself to sleep tonight. LOL!

The media only can manipulate if you believe they are giving your honest reporting. I for one after all the false reporting over the last 3 years dont believe a thing from CNN and the other main stream outlets. They are not honest, they only report parts of the news, and stoke Americas fears to stimulate and manipulate.