Photographer Travels 80+ Countries to Capture The World in Faces

It's been 9 years since Australian photographer Alexander Khimushin left home to travel the world, and he's since been to over 80 countries. While many travelers prefer short-term sightseeing tours, Khimushin is a firm believer that off the beaten path is the only way of traveling. Meeting indigenous people all over the world was the most inspiring part of his journey. This realization led to a personal project called, "The World in Faces," which he started around three years ago.

Travel and photography are two inseparable things in Khimushin's life. He has been photographing people he met during his trips since the very beginning. Three years ago while going through the archives of thousands of photos, Khimushin realized that he can put those portraits together to make a project. These were the people he met; they were the most interesting part of his travel experiences in the most distinct parts of the world. Inspired by the idea, he decided not only to publish those portraits, but to continue taking more of them as an ongoing photo project. It has become the main purpose of his journey.

I never take portraits in the studio or arrange a photo session with someone, so all the travel portraits are taken purely by chance — the one and only."

Reang Tribe woman in a refugee village near Kanchanpur, Tripura State of India.

There are hundreds of unique ethnic minority groups in the world. These people are just incredible. However, due to globalization, economic hardship, war, racism, and religious discrimination, many of them are living on the edge, losing national identity, language, traditions, and, in many cases, facing total extinction. Watching it all happening before my eyes, I came up with an idea of the photo project, 'The World in Faces.'

There are more than 10,000 ethnic groups living on this planet. Sadly, many of them are disappearing. Khimushin wants to show diversity of our world through the portraits of the people he meets on his road. Imagine spending one-and-a-half months in Guatemalan Highlands with only one mission: to visit and take portraits of all the various ethnic groups of Mayan people or to reach remote locations of Siberia for the portraits of ethnic groups on the edge of disappearance. This photographer insists that if we all realize how unique and amazing we, the people, are, we will care more about each other and will be more tolerant to people of another ethnicity, religion, and culture.

While traveling around Wakhan Valley (one of the most remote places in the country), I was invited by locals to their traditional home. Inside, I was welcomed by an extended family and neighbors who gathered just to see the guest. There were many kids playing together. A little girl with her unusually blond hair and blue eyes was one of them. Natural light was coming to the room from a ceiling opening that they use for light and ventilation. She was sitting right beneath it on a clay cook top when I took her photo.

Indian Himalayas, tribal areas of Ethiopia, Mauritania, Western Sahara, Djibouti, Afghanistan, Mongolia, Guatemala, Cuba, Japan, tribal Africa, Central Asia — this is a small list of the places Khimushin has visited. His dream is to take portraits of people of all the ethnic minorities of the world and publish a photo book about them. Raising awareness of issues they're facing today is the biggest goal of the project. 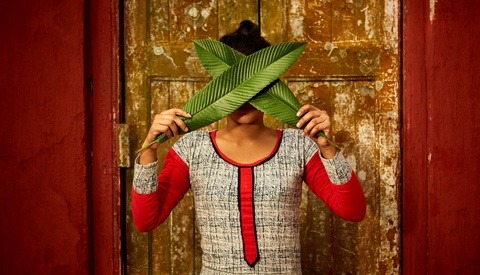 Thank you for bringing this work to my attention!

thank you for valuing this kind of work

amazing! thanks for sharing.

Really enjoyed the article but I have to take exception to one small detail: "many travelers prefer short-term sightseeing tours". Most people I know would love to travel for extended periods, to off-the-path locations, but just can't afford it or have the time to adequately plan such a trip. :-)

Thanks for the time spend to read the article. According your note: well, I said many but not all :) I clearly get what you say and I do agree with you, but I also met many people, who despite all these reasons made it. For example I had a chance to meet Daisuke Nakanishi, who saved for several years and travelled probably the whole world on his bike. SO circumstances are always different and 'many' are not 'all' ;) I also fall into the category, who wants to travel long and experience in depth the country I visit, I do so when possible, but I have a 3 year old child who I can't take with me to this exhausting tours, or can't get a visa for her (yes, when you are not American, you don't really get visas to all countries automatically :( ), or or or.

In my case, I was a single parent with three children so saving money was something rich people did. :-) Also, being diabetic didn't help. Now, I'm old and fat so a short-term tour is all I can handle. ;-)
I guess, being American, I never thought about visas. My wife is Japanese and she's never had problems either.

Honestly You deserve a medal raising three children, coping with diabetes (I know what's that, my dad has it) and still being able to take short trip!
I am Armenian and live in Armenia, I need to go through hell of procedures to get any visa. Big countries usually have big diplomatic agreements - so no visa issues.

I didn't say I did a good job raising them! :-)
I'm embarrassed to say I didn't know where Armenia was until I just looked it up. :-(

Emma Grigoryan... I see a soft and subtle approach of yours in Portrait Photography shooting as perfect as one can imagine.
It is only natural from me to post a question here. I am curious to know about your travel gear and the post production as well. I love the colors in your images. They are very natural. I have a Fuji XT 1 with few lenses and Canon 5D MK III with few L series lenses. Your inspiration could be my success in my future assignments...