Shooting Portraits of the Ku Klux Klan: How Do You Photograph a White Supremacist?

How do you photograph extremists without giving them the publicity they desperately crave?

A few months ago, World Press Photo awarded 3rd prize in its Contemporary Issues category to an image taken by photojournalist Mark Peterson. It shows five white supremacists relaxing on a boat, smiling, making Nazi salutes, with one holding a flag emblazoned with a swastika.

The image was part of a detailed investigation of the rise of white supremacists in the U.S.A., published in December by New York Magazine, and featuring a series of photographs shot by Peterson over the course of a year:

New this issue: Photojournalist Mark Peterson began documenting the rise of white nationalism after the 2016 election. This year, he traveled the country to surface the extent of the activity and catalogue the most dangerous ideologies https://t.co/jHj7r7oD0C pic.twitter.com/u4nkMNfFhK

Identifying and understanding extremists is part of a process of figuring out how to nullify it, but journalists walk a fine line. What happens when investigating it also gives it the publicity it lusts after, and how can a photojournalist ever be sure that they’re not being used?

White supremacist groups are no stranger to media manipulation. In the past, relationships with the press have been mutually beneficial, helping to sell newspapers while boosting membership numbers for the Ku Klux Klan. Reporters were keen to run alarmist stories and members made sure not to reveal anything that would undermine the air of mystery that surrounded the organization.

Today, white supremacist organizations now give media training to their members on how to speak to journalists without giving details that might unnerve mainstream readers.

To create the images shown above, photojournalist Mark Peterson spent a year documenting various white supremacy groups, attending rallies and gaining a level of access not typically granted to reporters. The private, posed portraits were shot in the homes of people who hold overtly racist views and advocate violence against others according to the color of a person’s skin. Are these private portraits helpful in understanding extremists, and what risk is there that such photographs are actually helping the supremacists' agenda?

Photography empowers, and representation can normalize the niche. Images make the invisible visible, create connections, and bring the obscure into mainstream consciousness. With this in mind, when it comes to the darker parts of our society, documenting public events is one thing; having extremists sit in private for posed portraits is entirely different.

Social scientists and philosophers often see identity much like a performance, something that is constantly changing and adapting as we project an idea of who we are to the outside world. Images play a role in how we know ourselves and our ever-shifting sense of identity, often giving us a chance to better understand who we are as individuals.

A photograph offers us a brief moment of cohesion, a slightly deeper idea of who we are — or, perhaps more importantly, who we want to be. The photograph can become our reality, giving us a point of stability, both for ourselves and for those around us. If a part of our desired identity involves hiding in a garage, wearing a mask and a pointy hat, the photograph can be a part of how it is achieved.

By putting on the robes and hood, a Klan member is literally dressing up and becoming the person that he or she wants to be, creating a performance of an idea that seeks recognition. The Ku Klux Klan has its origins in the carnivals, traveling stage shows, and Mardi Gras celebrations of the 1860s — with all of this theatricality and showmanship, the idea of a performance was very much a part of the Klan’s formation.

There is a thirst for visibility that dominates the culture of white supremacy: the burning crosses, swastikas, tattoos, salutes — all of them need to be seen in order to have meaning. White supremacists crave representation. Once disseminated, these symbols achieve their purpose: instilling fear, inciting hatred, and connecting with like-minded people.

The Power of the Portrait

In today’s intensely visual culture, every portrait is, to a degree, also a self-portrait created by the subject: in a way, the photographer is little more than the tool by which it comes about.

The subject of the portrait begins with an unformulated, abstract, and idealized version of themselves that they would like to see captured, and the photographer brings these elements together using his or her technical expertise. For the subject, the resulting photograph validates the effort that has been invested into creating this version of their identity, giving the individual the possibility of recognizing it for themselves and having it recognizable to everyone else that sees it. It is an opportunity to create something aspirational — for the individual, and in this case, for the community of extremists and its potential members.

The private portraits are problematic. Can the photographer be anything other than complicit in the supremacist’s agenda when providing them with a means of knowing themselves, a means of presenting that identity to the public, and all in the full knowledge of how the resulting images will be published?

While context is important, extremists are fully aware of how society sees them, and being denounced by the progressive media is little more than proof that their cause is justified, while potentially normalizing their presence and acting as a beacon for recruits. As Dr. Joan Donovan, Research Director of the Shorenstein Center on Media, Politics and Public Policy, notes, “Some journalists don’t understand that these groups run on charisma.” Being condemned by a left-leaning mainstream publication doesn’t matter when the photo of you standing in front of your swastika flag makes you look cool.

Guidelines for Journalists, None for Photographers

There are clear journalistic guidelines for how to report on white supremacists: don’t use their terminology, don’t name individuals more than once and never in a headline (individuals love notoriety), don’t quote them directly, and never assume that readers are already fully aware of how their beliefs are shaped by hatred and violence.

By contrast, guidance is not so clear cut when it comes to photography, and shooting portraits strays into an area that is somewhat slippery. To what degree does a portrait offer an opportunity to create, express, and celebrate an identity, an idea, and an ideology? What are the subjects’ expectations from sitting for these photographs? Are these images trophy pieces? Do they risk normalizing extremists?

The role played by the journalist is one that should be constantly questioned. What compromises is he or she having to make in order to ensure access, now and in the future? How can the photographer ensure that he or she is not being used? And, ultimately, does the public benefit from the resulting images?

Extremism must be documented. It needs to be exposed, studied, and questioned, and photographs play a crucial role in this process. However, as soon as an extremist poses for a photograph, whether it’s an identifiable individual picked out at a rally, or, worse, a portrait in his own home in front of his Nazi regalia, the photojournalist should put the camera down.

In portraying an individual — anonymous or otherwise — you are creating an icon. This panders to a performance that craves visibility and simultaneously provides a means by which their identity becomes a reality.

Not photographing extremism will not make it go away, but photojournalists need to consider whether their work gives it a life that would otherwise not exist. It’s possible to depict white supremacy as something that has a worrying presence in society and everyday life without also presenting individuals and feeding their notoriety. White supremacy should be photographed, but if a Ku Klux Klan member wants you to take their portrait, the chances are you probably shouldn’t.

Several attempts were made to contact Mark Peterson for comment as part of the research for this article. The lead image is public domain. 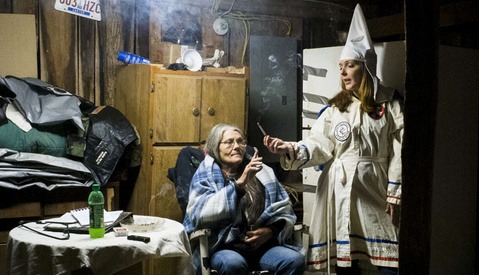 Documentary / August 31, 2017
The KKK Opens Their Doors to a Photographer, This is What He Saw 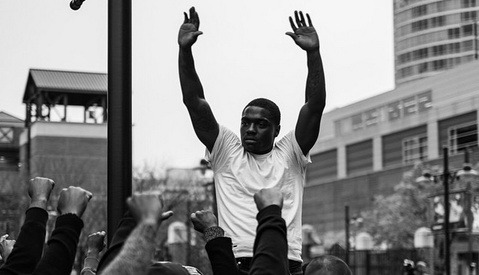 Documentary / April 28, 2015
The Young 'Amateur' Photojournalist Whose Work Has Been Heard Around The World 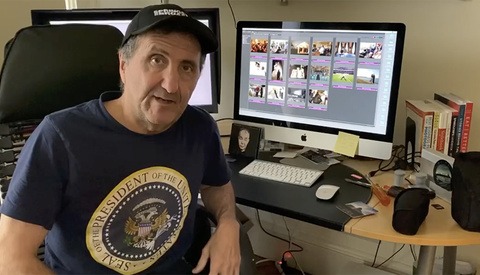 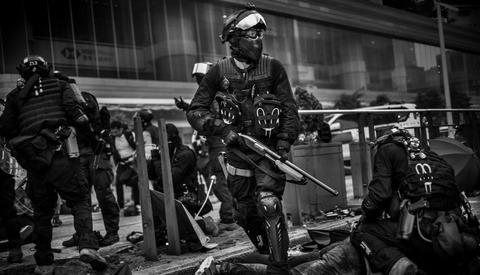 Interview / April 29, 2020
Blood, Sweat, and Teargas: What It Takes to Shoot Award-Winning Photographs of Violent Protest
Log in or register to post comments
18 Comments

Who recognizes the name Abu Bakr al-Baghdadi? And if you do, why is that? Because journalists name, write about and even "publicize" terrorists all the time. It's good journalists have rules, but it's not so good they don't follow them. 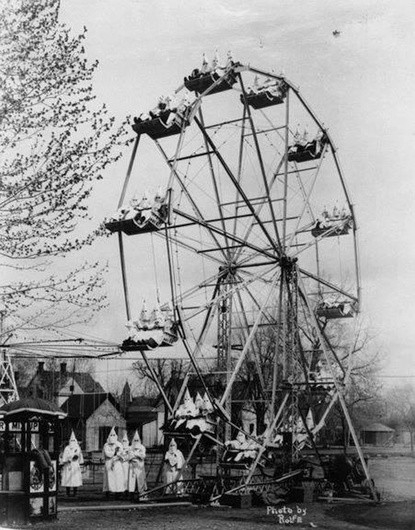 I photographed a white supremacist a few years ago in Florida. 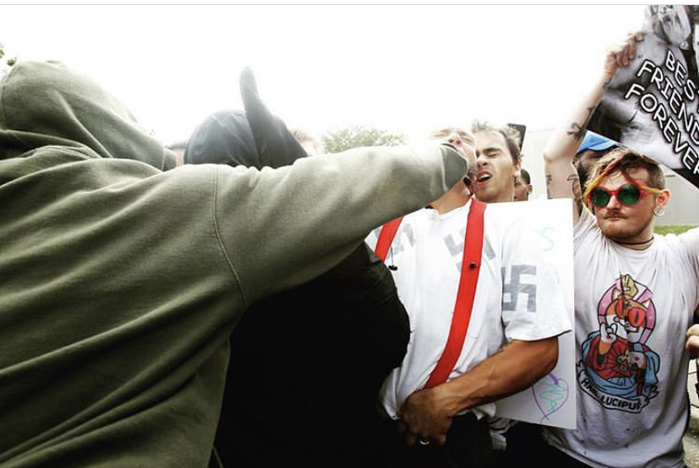 Any day ending in "y" is a good day to punch a nazi in the face!

“White supremacists” commit racially motivated murders in annual numbers you can count on your fingers, and in a bad year you’ll need your toes

Meanwhile MS-13 digs holes in public parks across the US and use teen girls to lure victims to be hacked to pieces alive, often as initiation, several hundred times a year.

The disparity in concern between the two speaks to the ideology of those who see one as an existential threat and the other as something to be dealt with quietly lest they give succor to the anti-illegal immigration movement.

It's obvious where your sympathies lie.

Why did you put quotes on white supremacists Mr Bros? Who is Ms. 13? Why hasn’t she been arrested?
Also, why are you talking about Ms. 13 instead of kkk? You should focus sir!
So many questions from what you say! Hope you answer my question!

Mr. Singer why negative vote me? What are you so upset about my questions? Are your feelings hurt? I want to help you not be so negative, but when all you do is vote down and run away I cannot help you. Please explain your actions! Thanks!

You really dont know who is MS13? Where have you been living over the last 20 years?

New Hampshire born and raised, which is alot more than 20 years hehe! Where are you from, friend?

Never mind I see you are Romanian but from youre pics you are been all over the world! Much more culture than me.

The pics you share are so amazing! I love the colors and the way you show peoples facing and there lives! Wonderful job! You should be very proud of all you have done!

I regard that as a false equivalency, and potentially whataboutism. MS-13 may pose its own threat but unlike white supremacists, it doesn't tie to complex history of slavery, countless civil rights abuses, and, most significantly, nor does it emerge as the more extreme edge of a deeply systemic racism emboldened by the current political climate.

Writing this story or photographic these types of groups gives the legitimacy. So why bother. Leave them in the dark and stop reporting about them.

So horrible to see people with so much hate in their heart. I will pray for the Kkk members, even if they are so aweful. They need to be saved from the pain in their souls.

The pictures and story are very good even tho it is hard to read about people with hate in their heart. I wish there was more love!

I hope everyone here can agree that this type of anger and hate is bad and sad. No excuses: be full of love instead of hate!

Andy Day "White supremacy should be photographed, but if a Ku Klux Klan member wants you to take their portrait, the chances are you probably shouldn’t." Nice summary.