Tips For Critiquing Your Own Photo Concepts And Video Edits

Whether you shoot video or stills, we’ve all been there. That point at which you lose all objectivity and the ability to discern thoughtful, evocative images that nail the concept on the head, from the ones that are “too artistic,” or simply don’t fit the story. Our eyes numb the part of our brain that lets us separate what works from what doesn't. Here are a few thoughts on how to approach critiques and kill your babies so that you end up with your best work.

You’ll have to forgive the expression of killing babies… if you haven’t heard it before, the phrase doesn’t have anything to do with actually killing your children. It’s a metaphor for cutting, cropping, deleting, or ignoring your own work that you have become too attached to. I’ve seen examples of this in photography as well as video, in both production and post.

In School
Most creatives who went through school, learned their craft in a group setting. Hours of critique sessions staring up at prints on a wall, like children mesmerized by twinkling fireworks exploding the sky. In video, students can spend hours evaluating the nuances of how their video edits flow with the music, and whether or not it’s mixed well. Part of what we learned by going through this process over and over again was to train our brains to disconnect that personal connection with work, and critique it from an unbiased point of view. Even after practicing and understanding this, I still suffer from this from time to time. Recently, I’ve had to deal with a few instances of not only letting go of my photo concepts, but also letting go of footage that I felt was interesting, but in the end it just didn’t move the story forward.

Taking The Personal Out Of The Project
While I don’t claim to be a pro photographer (walking around with an L lens pretty much says it for me) I have done plenty of photo shoots for varied projects. On one particular shoot I was asked to shoot a portrait of a welding student to go along with a news story about his experiences and accomplishments. Working with the writer, I shot some different images of the welder, with one series focusing on him holding up a medal from a competition, and another series where I attempted to get a bit more creative with his portrait.

While having options was great, I felt that the medal image was boring, and that my idea with him holding a lit torch was much more engaging. I spent time processing the image of him with the torch, fully expecting that this would be used with the article. Much to my surprise, the Creative Director decided it didn’t work, and wanted to use the image of him holding the medal. At the time, I understood that they didn’t like my idea, but instead of hearing “your image concept doesn’t quite work but we appreciate the options”, it felt more like “you’re such an idiot and your work sucks!” which is ridiculous, but I couldn’t believe that they didn’t like the other shot, and I was simply defending my child, my creation. I finally came around (after needlessly stressing myself out) and realized that for their audience, and for the message they wanted to send, the image of the welder with the medal made the most sense. The lesson I learned through this was to not get too attached to your ideas, because you can lose objectivity and become biased to what may actually be the best choice for a specific project. As I'll discuss further in the article, having friends or associates who don't have inside knowledge on the project can be resources for judging work with unbiased eyes.

I am Jack’s rotting brain.
Toiling away in the edit room, I’ve spent so much time watching and re-watching the same video sequences over and over, I can feel like a sedentary zombie. It’s absolutely necessary, but can be one of the hardest parts of being a video editor– and that’s leaving footage on the cutting room floor.

When it comes to corporate videos and commercials, major editorial decisions can be easy when they are out of your hands. You’ve got a shotlist or storyboard (since you insisted on proper pre-production!), and you slap together a sequence of shots with timecode and let your director or client deal with making the decisions on what to cut for the main body of the segment. The problem lies in deciding on your leftover B-roll, where you might have this great slider shot, where you nailed the exposure, and a hint of lens flare resonates nicely in the composition. Problem is, this doesn’t go with the rest of the flow of your edit. There might not be a line in the script that makes sense to go with this fabulous shot of yours. Kill your baby! If it doesn’t work, you have to cut it. 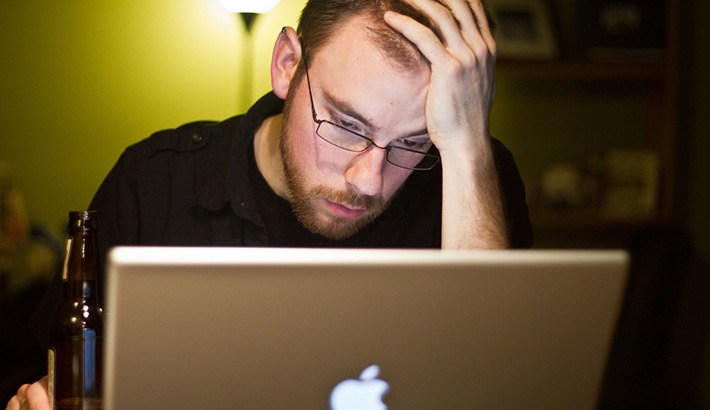 Personal Projects = Option Paralysis
For corporate and other paid work, editing options will be present, but on a personal project when you’re the one who is making decisions on the interview content to be used, you might have 30 minutes of strong testimonials that need to be cut down to 5 minutes to tell the most compelling story possible. Now that is a challenge.

I recall a project I shot in the summer, but didn’t finish editing until after the new year (this video about a man who was obese but trained and became a triathlete). Why did it take me so long to edit this? A couple of reasons. I was on no particular deadline to finish it, had lots of other gigs that needed quick turn around, but most of all, I had so much content for a what I needed it took a long time to cut it down to the best parts.

Starting with about 35 minutes of raw interview, I easily knocked that down to about 20 minutes of usable material. Cutting it down to about 15 minutes wasn’t too bad, but it took a lot of time. I had to write notes, organize the clips based on their content, and then find the logical story in the mishmash of thoughts. I think of it as jigsaw puzzle that has pieces that all fit into each other, you just have to figure out how they assemble to create the most compelling result. This is where things get problematic, and you can get option paralysis. Even a linear story can be told in several different ways, and 15 minutes was much longer than I wanted (I certainly didn’t have enough b-roll for that much interview footage!)

So what do you do? After analyzing things carefully, it’s very easy to lose perspective and objectivity. So, you’ve got to kill your babies. Even the cute ones. Any segments that show a weakness or don’t drive the main points of the story you are trying to tell need to go. The sooner you throw the images you've become attached to through a tree shredder, the faster and easier it will be to progress towards your final goals and your project will be much more refined for it. You’ve seen director’s cut versions of movies right? Long, aren’t they? Think of your long edit as your “director’s cut” and then make it shorter for your mass audience, AKA your “theatrical cut.” In a world of ever-shortening attention spans and short internet clips, shorter is almost always better.

After burying my extraneous creations six feet under, my next step is to have my friends, both video professionals and lay-persons, watch the rough cut and give me feedback based on the content only. Fresh eyes can easily see problems that you have been glazing over since your brain became numb to them about 4 edit-revisions ago. In my case, it helps me cut out sections of an edit before I spend needless hours tweaking the color or editing them to music when in the end they are not even used!

It’s very easy to justify keeping a clip or photo as part of your final presentation, but sometimes you have to make the tough call and accept that what you think is a great shot isn’t necessarily a great shot for this particular project. Part of the creative process is evaluating what works and what doesn’t, and when you can I’d recommend utilizing your resources to help you evaluate that. And of course, if you’re laboring over a photo series or a video edit, don’t get too attached and remember that sometimes you have to kill your babies to move forward.

Have you ever been in a situation where you had a hard time letting go of something you thought was so good, but in the end you had to? What was it and why did you cut it or go with a different final image?

BTS / November 5, 2018
How I Converted My Living Room Into Scenes From History: A Year-Long Personal Project

I agree completely! Whenever I finish an edit I always look at it 2 days later and just rip it apart because I got to attached to some shot that needed to go. It's hard to ditch those purty shots but it has to be done sometimes!

On the flip side of things, when I look back into my photo archives from trips or projects, I often find a few shots that stand out to me and I go, "This shot is great, why didn't I use this?!" And I often don't have an answer. I think coming back to old projects with fresh eyes can lead you to some interesting discoveries.

I use Kill Your Darlings... To avoid angry moms :)

Flip it in photoshop, it fools the eyes instantly if you can't be bothered to wait 2 days or you have a deadline.  Try it.

I won't tell you.