It’s state fair season, and that means it’s time for corn dogs, funnel cakes and video opportunities. If you’re the type that goes every year, though, you might be struggling for new ideas, and so here are three ways to mix up your state fair video shooting.

State fairs are the best for photographers looking to really practice their technique. There’s plenty of space, lots of visuals to shoot, and no one bothers photographers about tripods or crazy lenses. Those things are practically expected at the fair. Here’s how you can put all of those tools to good use.

Sure, you can make a moving selfie with a gimbal, but why not try something more creative? You can use it to make a shot you can’t get easily otherwise. For instance, in the video at the top of this post, I made extensive use of the not-that-expensive DJI Osmo Mobile 2. At $139 it’s a no-brainer for anyone shooting video. If you want to add a camera instead of using your phone’s camera, that model goes for $379.

You can see how a gimbal can smooth out the shakes from things like ferris wheels and the SkyRide that’s basically a bucket on a wire that carries you above the fair. I used the Osmo Mobile to get the bird’s eye view of the roller coaster from the SkyRide about a minute into the video. It can also be used like a slider, as seen with the shots of sausages about 15 seconds in. And of course, there’s the main purpose for a gimbal, which is walking, something that there’s plenty of in a fair.

A protip if you’re intending to use your mobile phone for shooting this way: recording video while on a gimbal drains the battery very fast, and so having a portable power pack to recharge your phone after a few hours of shooting is a good bet. The Osmo also recharges with a USB cable, so you can charge a few devices with just one tool.

Out-Of-Focus Is the New In-Focus

This year, instead of nightly fireworks, there was a coordinated drone show in the sky. When focusing on the drones, they become pinpoints of light that don’t look all that impressive in the video, but when you twist the focus ring to throw them out of focus, they become flying balls of bokeh that become easier to spot on the frame. In this case, I overlaid them over the rising moon just after a minute into the piece for an added night effect. 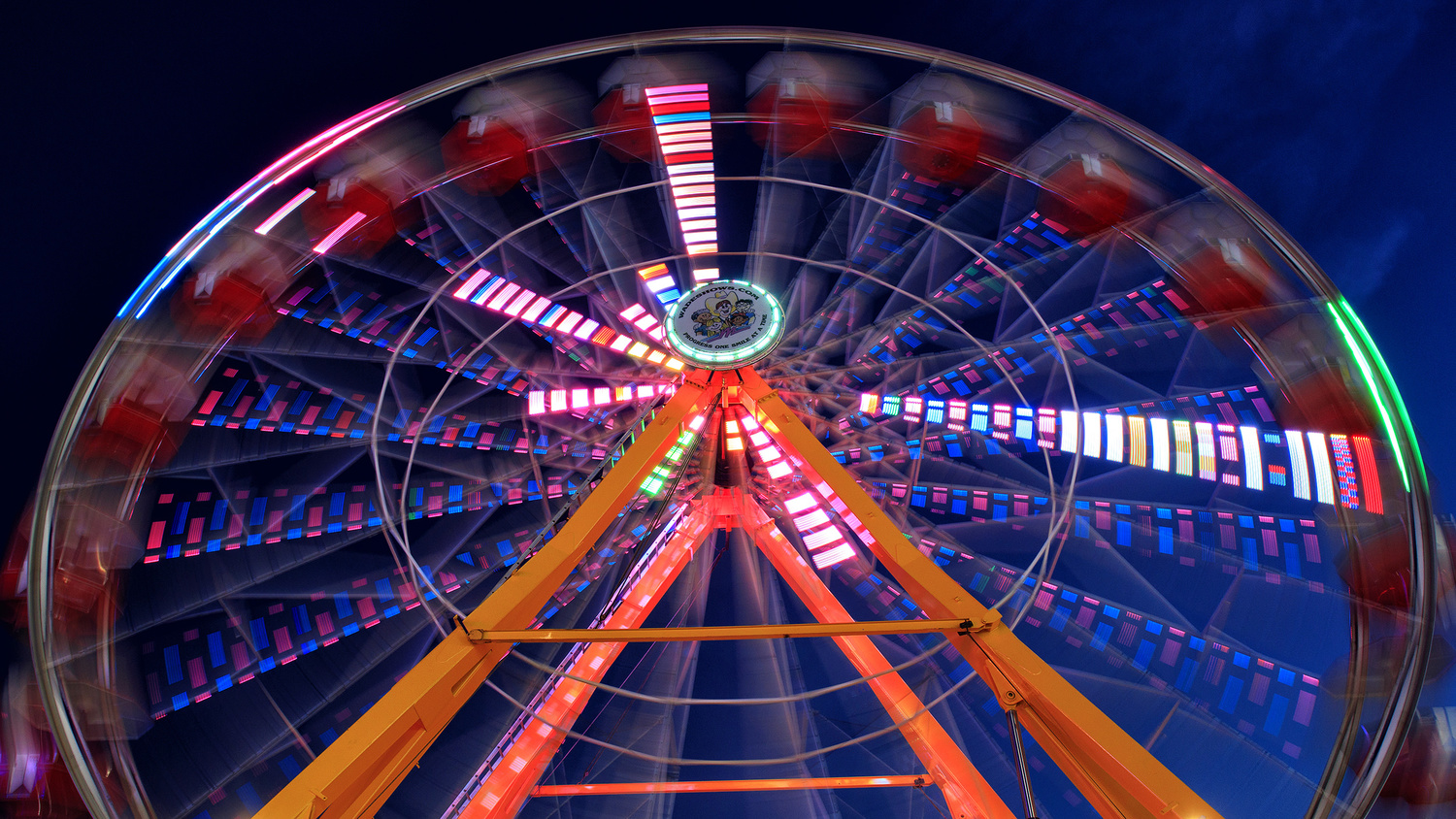 The ferris wheel at the New York State Fair photographed using motion blur. Many of these shots are combined into a timelapse for the second shot of the video.

Then there’s the time time-honored tradition of dragging the shutter to create motion blur with carnival rides. These make for interesting individual photographs, but do enough of them and you can use the photos to create a timelapse of motion-blurred photos, which adds interest beyond speeding up ordinary video. In the case of the one in this video, I used the Canon EOS 80D’s built-in time-lapse function to create this all for me. While the DSLR was doing that, I took another time-lapse with an upward pan using the Osmo placed on its base on the ground next to the camera. While low-light performance on the iPhone 6s is lacking, I did at least have two options to use for my video when I was done and didn't take any extra time to do it.

When you’re creating fiction work, it’s easy to get a series of shots together that look like they match. You can just tell the actors what to do. This makes for smoother viewing for the user as one scene moves cleanly to the next with continuity and matched action. But how do you do that in an uncontrolled situation such as a fair?

By keeping an eye out for repeated action, you can gather the materials you need to build that sequence. I focused on three of the skill games here. If you take a look at the last game in the piece, at about the 1:10 mark, you’ll see a man tossing red rings at bottles. He had an entire bucket of them, and so he was repeating the same throwing action for quite some time. I shot the first few tosses as a wide shot to establish the scene of the game, then I did a tight shot of his face until he lifted his hand and toss a ring. I then I did a shot of rings hitting the bottle from another player's throw. All of the shots are from different time periods, but by cutting them together in sequence, it looks like we’re watching him smoothly toss the rings in one motion.

It goes without saying that this takes some time and a lot of shooting. You'll want to make sure you got enough repeated action captured so that you can match the frames as closely as possible between the varying shots for a seamless edit. It's also best to go to two different types of shots, such as a wide to tight shot, or vice versa, and when you're gathering the footage, to make sure to note any major changes in the background which could prevent action matching.

Finally, you'll also want to invest in a tripod. In the name of traveling light, I didn't bring a full video setup with a fluid head (if I needed to pan, the Osmo handled that pretty well with its joystick), but I did bring a MeFoto RoadTrip Classic Leather Edition tripod, which folded up into a small package and allowed me both tripod and monopod stabilization options in one package.

Has anyone had a chance to shoot fair video? Please post any of your tips or video in the comments below.