Darth Vader makes me want to take better photos. A heavily breathing lord of darkness with a robot hand might not seem too inspiring at first, but I can explain.

Inspiration for our work is all around us. When I first started taking wedding photography seriously, I’d spend most of my downtime obsessing over the work of other wedding shooters who I considered to be creating a standard. Some of them, I would emulate. Others I’d admire from afar but never fully understand their process, despite the beauty I’d see in the photos they shared. Eventually, though, other images within my industry became less of a source for creative energy.

But I did find that I was looking at my favorite movies and comic books in a whole new way. I was dissecting them, pulling out all of their parts and laying them out for closer inspection.

Sometimes it was the lighting. Like the ominous wash of blue light beaming upwards in the otherwise dark, industrial scene where Luke Skywalker faces Darth Vader for the first time in Star Wars: The Empire Strikes Back. The tension as that battle begins almost feels like static electricity in my own living room every time. I can’t thank cinematographer Peter Suchitzky enough for always making me think of those partially-lit shadowy figures whenever I’m playing with gels and grids in the dark.

Other times it was contrast or composition that I’d obsess over. The beautifully shot Minority Report always seemed so clean and full of punch that I couldn’t help but obsess over the framing of every last shot. Then, without question, there was 2001: A Space Odyssey, which is just a master class in framing and the potential power of static compositions. Kubrick doesn’t need too much of my detailed praise, though. We’ve already got the Stanley adoration covered at Fstoppers (Not to mention, everywhere else on the web).

What you’re experiencing when taking in an amazing film doesn’t always have to be pure eye candy to benefit you as a photographer. Storytelling, emotion, anticipation and motion are all things you’ll feel that can inspire your work.

Ridley Scott’s Alien is one of my favorite films of all time. A huge part of that for me is the constant building of tension and the careful way the movie uses the emotions of the characters to instill fear in the viewer, rather than simply scaring them with gore and giant monsters at every turn. Sometimes telling a story is about restraint, and what you elect not to show at all. Alien has always embodied that for me. I love every texture of every set, and the claustrophobic feeling traveling through the ship gives me. It’s an absolute clinic on the use of interior space and texture, and you’ll see the look emulated everywhere from the Matrix to Independence Day.

The reality is that I’m not attempting to directly emulate any visual styles from these movies. Heck, I just gushed over Alien for an entire paragraph, and while I can’t say enough about Ripley as a character in the film, I’m betting her overall look throughout this film isn’t what my brides are going for. For me, though, it’s about getting lost in visual art that I have loved even before I took up the camera as a career. It’s thinking about the big picture.

Certainly the idea of finding inspiration in these films isn’t new. But here are a few more that I love to veg out to when I need a creative pick-me-up. Since science fiction isn’t for everyone, tell us what films you find the most visually inspiring in the comments.

This is noir done right, but with cyborgs and wild haunting interiors.

Christoper Nolan's magnum opus to the dream state is an instant, modern classic filled with crazy practical effects and an M.C Escher vibe that won’t stop giving you things to look at.

This Danny Boyle is far from upbeat with its haunting sets and sounds (including an amazing soundtrack), and an undeniable striking visual contrast setoff by a ton of solar-centric shots.

Here is yet another gritty noir-turned Sci-Fi adventure that will showcase lighting and story for those not yet familiar with this cult classic.

Just incase you didn't hit my link above: More crazy symmetrical visuals than you'll ever imagine.

Good call on picking Alien. It one of my all times favorites as well. I saw it for the first time at age 16 and had to sleep with the lights on for a week. haha!

You can't ask me to watch a Tom Cruise movie. Please, no.

It is shot Beautifully.. But not a very good movie.

It's especially poor if you're familiar with the source material - the Phillip K Dick short story by the same name.

Back in the in the 90's in college I had an assignment to shoot a photograph with eggs.
So I turned to Alien for inspiration. 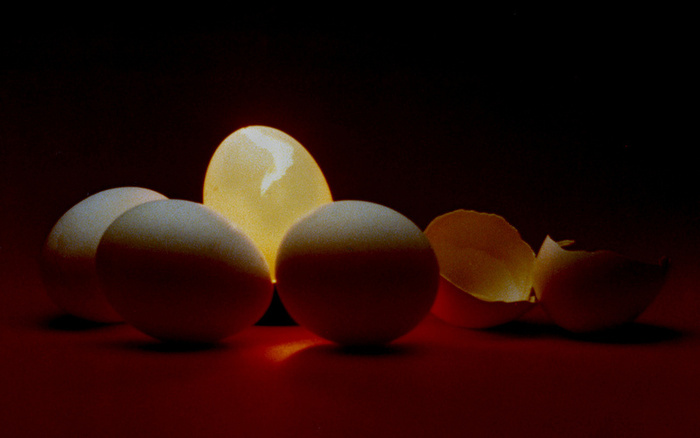 These days I lean more to Ghost in the Shell.

I could have listed 50 if allowed myself, Andrew. I wanted to hear what you guys thought? Give me a few yours, dude?

All of them are long time favorites of mine!