Is This the Quirkiest Rangefinder Camera Ever Made? A Look Back at the Polaroid SX-70

The Polaroid SX-70 has got to be one of the most innovative rangefinder cameras ever created. Photographer Willem Verbeeck gives you a short video that explains some of its idiosyncrasies and why you might want to pick up on from your local second-hand camera store.

The company name Polaroid now describes a Dutch company that was founded in 2008, previously called Polaroid Originals, and prior to that, Impossible Project. The shift to just “Polaroid” came just a few months ago and thanks to its hard work, stock is now very easy to get hold of. You can buy a pack of 8 exposures from B&H Photo for $18.99 and you can also grab yourself an SX-70 refurbished by Polaroid for $389.99.

Verbeeck might well be right by suggesting that the instant film takes an entire day to develop fully. Some users have taken to manipulating the print while the emulsion is still soft, creating an effect that’s not too dissimilar to an impressionist painting.

Do you have an SX-70? Did you own one back in the 70s? Leave a comment below and let us know your thoughts on this quirky camera.

You'd best correct your headline, ASAP, for the SX-70 is most definitely NOT a rangefinder camera, it is a true Single Lens Reflex.

Hmmmm. Both? How can it be both? The ad calls it the only folding single lens reflex camera. 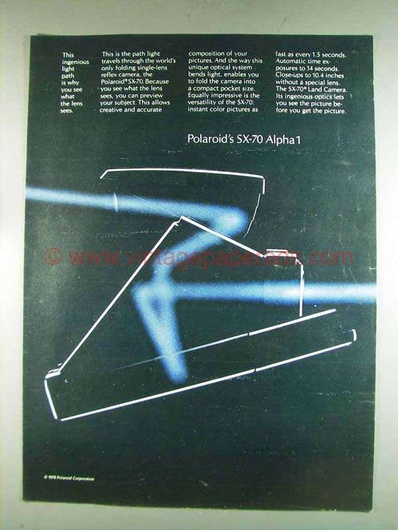 It has a rangefinder mirror.

most manual focus SLR cameras have this - it's that split circle in the middle that allows for precise focus.

Yeah, I have one in mint condition. Shame the film exposures from Impossible are just......... SHIT.

I get about 7/8 good shots out of a pack. The BW ones are the best, I find. There's some guys that are modding it to get shutter speed control at https://opensx70.com/.

Back when the iPhone 4 came out I read a quote from Steve Jobs and his admiration of Edwin Land the creator of the Polaroid camera. I then noticed a similarity in design and created this to compare. 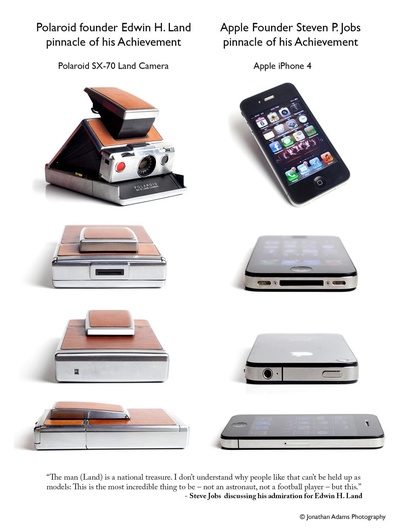