Panasonic isn’t holding any punches with this new camera. Just how much have they crammed in?

A few weeks ago, I complained that the Panasonic S1 was too lackluster to attract real video professionals like the GH5 might have. It looks like they answered my prayers with the newly announce S1H. Thanks, Panny! Here’s how the specs look so far:

The Best on the Market

The GH5’s ability to record 4K footage at 60 fps was a gamechanger for many, including me. This was usually reserved for higher end cameras, the cheapest/smallest possibly being Sony’s FS7. Now, the S1H is set to raise the bar yet again.

Panasonic’s S1 was the first full frame mirrorless camera that was able to record 4K at 60 fps; however, it was only with a cropped sensor. While Panasonic isn't confirming it yet, News Shooter is suggesting that the S1H may have the same issue. The tech is still beyond what anybody else is offering, but I’m sure Sony’s taking note of what they need to deliver in the a7S III. On another note, while the GH5’s IBIS is amazing, it’s not as hot on the S1, I feel. That could be somewhere for the opposition to compete.

The S1H appears to be close to what we wanted from a full frame GH5. It’s worth noting that the GH5 was able to record 10-bit 6K video in its 4:3 anamorphic mode. 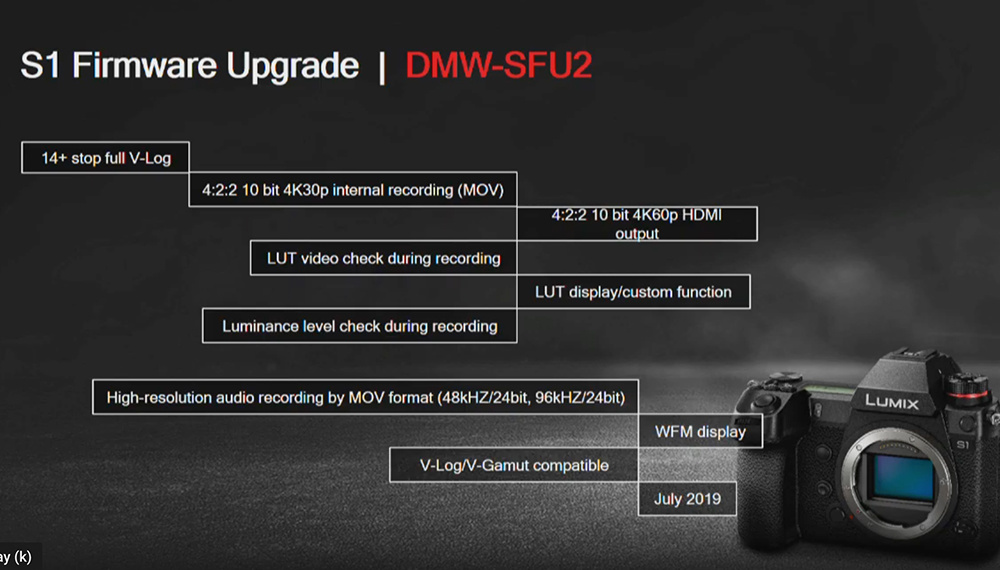 Straight from their presentation at Cine Gear.

For the annoying price of $199/€199, you can upgrade the firmware of your S1 to compete with the feature set of the S1H. You’ll get:

I’ve complained about this before too, and Panasonic has been one of the prime examples of charging money for upgrades that probably should have come out of the box. Nonetheless, it’s a worthy upgrade to S1 users who are probably a little gutted seeing the S1H being announced so soon after their purchase.

The S1H will be available this fall, although I’m sure it’ll be tough to get one at first. B&H hasn’t started preorders yet, so I wouldn’t hold my breath. I’m excited to see the buzz around this camera, the L mount system, and the possibility of seeing CFexpress cards used.

Just so you know, the S1 firmware upgrade is free for any early adopters and/or anyone who buys the camera in the next 2-3 months - so, it's basically a massive free firmware update that gives you 4-5 features that no other company is offering. Also, compared to the A7 series, the S1 IBIS is amazing - seems really close to GH5 quality to me and that's impressive for a full-frame sensor.

The S1H seems very promising and I'm guessing there are some big features yet to be announced.

Oh interesting, thanks for pointing that out.

I personally haven't found anything that's beaten the IBIS in the GH5. I agree that the S1 still works as it should but I found it to be too jerky, even with dual IS. Great for photos but I don't think I could trust it like the GH5.

Does this camera have IBIS? Everywhere I've read so far doesn't state that it does. If it does, might have to add this to the arsenal.

I don’t think it’s a confirmed feature quite yet but we’re all eagerly hoping it does. Most cine cameras don’t have IBIS (like the GH5S) but with the size increase and price tag, I don’t see why it wouldn’t. Here’s to hoping!