Canon has been on quite the roll when it comes to lens design lately, and they seem to be showing no signs of slowing down, as a new patent has emerged that shows a truly ridiculous lens.

Canon has filed a patent for an RF mirrorless full frame lens with a focal length of 28-280mm and a constant aperture of f/2.8, a lens that is unheard of in the standard photo and video market. Such a lens would be undoubtedly enormous and likely quite expensive, but would also be tremendously useful for people like wildlife and sports photographers. I absolutely love my 120-300mm f/2.8 right now, and adding the rest of the range down to 28mm would be unbelievably useful, even if such a lens was rather cumbersome.

However, superzoom designs tend to have noticeable sacrifices in image quality (as the standard model 28-300mm f/3.5-5.6 shows), but with Canon's new advances and the new mount, it would be interesting to see what they could accomplish. Of course, it is important to remember that ​​​​​​companies patent lens designs that never make it to market all the time, but even if this one doesn't see the light of day, it's great to see Canon pushing boundaries. 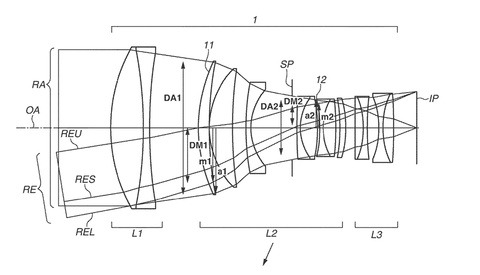 While the aperture and zoom range is certainly impressive, I just can't imagine image quality being very good for a lens like this unless it was MASSIVE. Perhaps it's for a potential RF-mount video camera.

My questions is I thought a selling point of Mirrorless was smaller cameras with less bulk and weight. Allowing for smaller lens designs at the FF format with the shorter Flange distance to the sensor. If the lens is massive would that not negate that and just make the rig unbalanced and front heavy. Not to mention the weight of the lens in itself. What are you gaining by this. As one who shoots on film, I have no skin in this debate, other than trying to understand the advantages of a unbalanced set up. This goes for all lens manufacturer's not just Canon.

There are many selling points of MILC. For some size will be critical and there are many other lenses that cater this category.

But the weight and size savings are only considerable for "normal" lenses.

Quite obviously, Canon is going to be making supertelephotos in the R mount, lenses like a 600mm f4, 800mm f5.6, etc. And of course with those focal length /aperture combinations, there is no longer any real advantage to having a shorter flange distance.

Equally obvious is that a lens like a 28-300 f2.8 falls into the supertelephoto caategory. Anyone considering any 300mm f2.8, zoom or prime, has already made the decision that they are willing to sacrifice size and weight for focal length and aperture.

Applying the same size/weight priorities to a supertelephoto that you would apply to 'normal' lenses is a little preposterous for you to do, don't you think?

I mean, you talk about how this would be unbalanced and front heavy - well what do you think a 500mm f4 or an 800mm f5.6 would be? Huge supertelephotos have always been unbalanced and front heavy. That's the way it has always been. No viable reason to think a 28-300mm would be any different than any other 300mm f2.8, with regards to size and weight.

Have at it Hoss. Nice word salad.

I thought this was the advantage for mirrorless also but for Canon the new RF lenses are huge! As this patent shows, the RF series has now become a target for them to apply emerging lens technology that doesn't make sense to use within the EF series.

Mirrorless ILC really was compact when Olympus and Panasonic debuted the Micro Four Thirds System in 2008. And when Nikon introduced the Nikon 1 system in 2011, Fujifilm the X-Mount in 2012, Sony the E-Mount, etc. But it took both a design philosophy to maintain small bodies and a smaller sensor to enable smaller lenses that still uses modern design.

When we got to Sony's full frame offerings, the bodies were still pretty small (alas, also underpowered), but to compete with or better Canon and Nikon, Sony's lenses got larger than FF DSLR glass. Sigma exploded their SWAP in the ART series, going to more complex designs with more elements. Canon decided for the RF System to mostly pursue "hero" lenses, totally modern high-end designs, larger, heavier, and more expensive than most of their DSLR gear.

Heck, even Micro Four Thirds can be large. Panasonic decided small was not an assset for their higher end M43 bodies. Olympus still delivered on small for premium series lenses, but went full-on modern design for PRO glass, and that can get heavy, even for a smaller image circle.

And yes, we used to have full frame prime lenses for 35mm much smaller than most if not all M43 prime lenses. Based on classic Zeiss or Leitz designs, you had 4-6 lens elements, no special Ed or SHD glass, no aspherical elements. So you needed to go down a few stops to get sharp, you had fuzzy corners a anyway. No electronics, no motors, no auto-anything. You can still buy similar lenses today, just not from the camera makers.

Thanks. Coming from Medium Format and Large format film, I can tell you that some of the Mirrorless lenses are physically larger than prime lenes I use on my Mamiya 645 and are aproaching some of my smaller Takumar primes on my Pentax 6X7. Hell, that beast actually had 2 separate lens mounts. I know heavy and was just wondering . Like I said, I do not have skin in the digital small format game. And don't get me started on the so called digital MF. Only thing with the added weight, I hope the strap lugs are reinforced.

Some manufacturers, including Canon, make lenses starting at 28. Like Canon 28-70/2 and Tamron 28-75 which historically seems like a step backward. Did you notice that? I wonder why they don’t do 24?

You wonder why they don't propose to do 24-300 instead of 28-300mm? Seriously?
Are you aware that when optics are able to zoom from wide angle to telephoto, there are extreme sacrifices that are made when it comes to the optical integrity of the lens?
A 28-300mm lens will already be hovering on the borderline of optical viability when it comes to contrast, resolving ability, color cast, and edge resolution. In other words, because 28mm is so wide, it will already be pretty bad when it comes to the image quality that it produces. If they made it EVEN WIDER then the image quality would be complete rubbish because the compromises that would have to be made would just be too extreme.
That is why they would "start at" 28mm instead of 24mm. And most professional-level photographers would reject such a lens, even at 28mm, because it just won't produce the level of image quality that they need to do their jobs properly.
I think that a 35-300mm would be much more viable, because the optical compromises, while substantial, would not be nearly as atrocious as those in a 28-300mm lens.
When it comes to what photographers want in a lens of this nature, getting the field of view you need isn't nearly as important as getting top-notch resolution and clarity.

I’m happy I’m finally in a good company of experienced optical engineers fiercely protecting their professional field. As my tutor once said « State the obvious in your exam paper and get easy marks ».

Probably it doesn’t make any sense to argue any more as needs of seals and people photographers are quite different.

Seals have to be sharp wherever they are, while people often need to fit into small spaces.

28 for you is extremely wide for you as your wildlife doesn’t seem to enjoy your presence, for me it is « shit, I have a wall behind and still need to shoot all these happy drunk people, whatever the distortion ».

It's probably a simple physics limitation. The 28-300 is already astounding and obviously we can't all see the results yet, but imagine how the light has to bend into a huge lens like that to create a 24mm image. The corners would be garbage.

28-300 is pretty much standard budget zoom range available from any manufacturer.

Every lens design is some kind of compromise. I have a 14-150mm for Micro Four Thirds... not constant aperture, but f/4-5.6 across the range. That's 28-300 equivalent on a full frame camera, so similar. They picked the range, IQ, features (tes to wather seal, no to constant aperture or all metal build) to match the target customer and application (casual travel & hilking lens for me).

Change just the aperture to constant, let's say, and you may bump price or weight too much to deliver a desirable product. So may ypu have to spend more, change otger parameters, etc. to deliver a different lens that has an appropriate feature set. Thus my other long range zoom, a 12-100 f/4.0 pro model. Less range, twice the price, but it does go to 24.

So maybe dropping to 24 on this would have damaged IQ so much, they would have had a substantial redesign, leading to a heavier lens, more cost. But once you hot that higher cost point, you can't sell at the original price target. So what do you need to sell this lens? Maybe more image qulity than before, upping the SWAP. Does that make it too pricey, too heavy, etc? Some sets of options, even if possible, are not marketable.

I envy M43 for 12-100/4 as it would seem like perfect event photographer lens on full frame. I understand it will be huge. But it is enough to be smaller than 2 cameras and 2 lenses.

Canon has been using patents as a marjeting tool for years. This lens will never see the light of day.

Despite what was written elsewhere and repeated here these are not RF lens designs.
One give-away is that the cover glass and distance from cover glass to image plane are way too large.
From the text of the patent and Figure 17 I would guess the intended implementations are for a video camera rather than an ILC.