After many years of speculation and countless false rumors, Canon has released a replacement for the venerable 24-70mm 2.8 L, along with a few new wide-angle primes: the 24mm f2.8 IS and the 28mm f2.8 IS.

Coming in at an MSRP of roughly $2300 USD, it's a significant jump from the $1300 of the old version. Canon claims new and improved elements throughout (both Super UD and UD) and a large reduction in weight, which will be great news for anyone who regularly uses the 24-70 and is familiar with it's current weight. Filter size will increase from 77 to 82mm, and the lens will be fully extended at 70mm, as opposed to the current lens, which is unique in that it is fully extended at 24mm. Unfortunately, there will be no Image Stabilization, a feature that many expected and were looking forward to in this upgraded version. Expect thousands of angry photographers to march on the Canon Headquarters for this oversight. 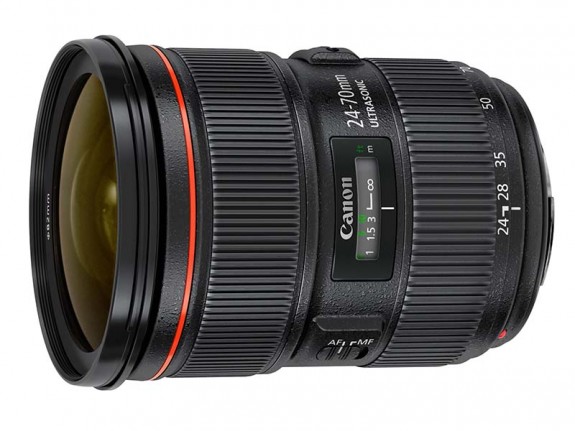 In addition to the new 24-70, Canon also announced a 24mm f2.8 IS and 28mm f2.8IS, which will be released at $849.99 and $799.99, respectively. Both of these lenses will feature Image Stabilization (Canon claims 4 stops worth!) and upgraded aspherical elements. These appear to be targeted at landscape, architectural and street shooters who may be on a budget. I'm sure the 4-stop Image Stabilization will be of great appeal, but I'm interested to know if photographers are willing to spend nearly $1000 on a 24mm or 28mm prime lens that are, relatively speaking, rather slow compared to other primes in that focal length range (24 f1.4L and 35 f1.4L, I'm looking at you!).

As for me? I'm certainly interested, though not entirely sold. At $2300 I would have loved to see Image Stabilization in the new 24-70. However, if they have fixed the obscene barrel distortion of the current 24-70L, it may pique my interest. What are your thoughts on the new lenses? Will you be lining up outside B&H or Adorama to get your shiny new lens, or are you content with the current iteration of these lenses?

Update: Both lenses are now available for preorder through B&H and Adorama.

The full press release from Canon can be seen here.

Not sure if I am completely sold to the Primes, as they are twice the price and have a lower Aperture, although IS is good I still don't know, I mean... Wide Angle doesn't show blur as bad as say a 200mm anwyay.

The other thing, not sure if it's just me, but this Green theme on the new Lenses is kinda... yuck. I don't know if it's a new change, from Yellow or Red, but it just doesn't fit Canon.

And of course my last rant is... Twice the Price for the 24-70!? I see no difference and I don't have the current 24-70 but I don't see too much wrong with it, aside from Weight which I've heard is heavy! But still, I may as well pay that much to go to a gym and gain some more muscle than buy a lighter lens :P

Call me a loser, but purely aesthetically, those lenses are all dog ugly. What's going on, Canon?

Well I think the new 24-70 looks sexy and I have always hated how the old one reverse-extends, so it's nice this new one is NORMAL.  I think it will be a very nice lens, even without the IS (though it really SHOULD have that by now!!!) but for $2300 I think that's INSANELY overpriced!  I was thinking maybe $1700 or something....

It seems to me these primes might be more for video since they have IS built in.  The real question is when will Nikon and Canon make a few 1.4 lenses with IS/VR for video?  That would have made the most sense. Crazy the 24-70 doesn't have IS yet either....surely that will be the next upgrade to that lens in the Nikon line.

Ahh yes, that's true, they did say in the future their lenses will be more Video-Worthy. But still... I don't see the need for it, as a photographer.

I currently have the 24-70L and I love it for my walk around lens but the VII and still no IS?

They did also just announce the new 24-70 f2.8L IS II, on preorder already at the major online photography retailers.

Good point man.
SOMETIMES YOU JUST GOT ENOUGH EQUIPMENT TO DO GREAT WORK. IT'S TIME WE FOCUSED ON CONCEPTS, GREAT EXECUTION and PROMOTING OUR
WORK INSTEAD OF BUYING EVERY LITTLE GADGET, AS IF IT WILL MAKE OUR PHOTOS "INCREDIBLE".
"wow that's a great shot, it must be the new 24-70mm"

I think the lack of IS in the new 24-70 will be a strong deterrent for potencial buyers... As far as the wide angle primes, I think IS is just for justifying its high price... I do not see the benefit of IS on a prime. Besides, I think my 28mm f1.8 (non-IS) is still a lot better than these and cost me half (around 500€)...

$2300 just seems like a mad price hike for nothing more than a revision, you might as well opt for the brilliant 24-105 F4..  I guess the IS on the other two lenses is for video.  Canon are definitely not listening to it's audience, that much is painfully clear.

"These appear to be targeted at landscape, architectural and street shooters who may be on a budget."

Since when does $800 represent a budget lens?

I'm disappointed here. Canon has people that read through all the forums and knows what people want. We as Canon owners are quite vocal about what we want next. It feels like an insult that they wouldn't offer it to a lens that many use as their standard lens for everyday shooting. Was the original such a poor design that it cost 1000 more to fix and improve everything? I hope the early adopters and reviewers show us how much more worth it is to spend those extra $$$. It may be lighter in hand, but more lighter in the wallet.

Looks like Canon's response to their latest weak earnings statement is to replace their President and double the price of their product. Hmmmmm

too expensive, plus nikon is way better than cannon :P

So when does the price for the old version drop?

Seriously, the 24-70 for that price? No thanks. I rather buy a second body.

I'm starting to feel that the 24-70II is the final cut pro X of Canon.. much anticipated but a huge FLOP.  I mean the price is crazy and the bullshit of all is that the same lens costs 2570 euro here in the Netherlands meanwhile $2299 in the U.S. converted in euros 1596,42 soo in other words I would have to pay 1000 euros more?? No thanks my MK1 does it for me

The sad thing is... Tamrom has a 24-70 with IS.
As far as primes... i'll wait on Samyang and im sure videographers will look towards cheap primes too