In a two-part release, NikonRumors posted the Nikon D850's presentation slides. Although written in Japanese Chinese, we can infer a number of specifications about the D850 (and anyone who speaks Chinese is welcome to help us translate the rest!). Some highlights include greater viewfinder magnification, 9 fps at full resolution, and up to 14 fps, perhaps, in bursts of up to 51 of some kind of uncompressed raw-format images with an MB-D18 battery grip.

For the full notes and the first actual photos of the D850, check out the slides on NikonRumors in Part I and Part II of the presentation slide release. However, after having looked through the information, it seems a few specifications are now all but confirmed:

There are multiple references throughout the slides to wedding, sports, landscape, and architectural photography. One interesting slide seems to suggest the D850 will feature some kind of in-camera focus stacking. The example image shows an insect specimen with a relatively narrow depth of field while the next image shows that specimen in full focus.

Additionally, autofocus point coverage could be 130-percent of the frame compared to the coverage in the D810. There also seems to to be a reference to an autofocus-point-selection feature that lets the user select an extremely small autofocus point within the normally standard-sized area covered by a single point.

If you speak Japanese Chinese and/or have a better idea of the features described in these slides, please feel free to comment with your findings. Fair warning: using Google's Translate app for image-based, real-world translation is extremely unreliable and relatively NSFW.

UPDATE: NikonRumors has published an article with a proper translation of the Chinese slides. A subsequent article also states the D850 could be announced as soon as Aug. 15, which was the date on the presentation.

Looking forward to the D850.

Sorry, but I'm quite sure that is Chinese?

Sorry for the terrible misunderstanding. I (obviously) incorrectly assumed it was in Japanese because I was trying to use Google translate to figure out what I could...and I thought the app auto-recognized Japanese. But I only recently realized it must have been set to that since the last time I used the app was while in Japan (and Japanese made sense for a Nikon presentation).

Thank you to those who pointed this out. Corrections have been made along with an update pointing to a proper translation on NikonRumors.

the slides are in Chinese. in addition to what you have mentioned above, it says that D850 is a 45.75MP camera, up to 9 fps with battery grip,

It sounds like it will a phenomenal camera. I have the d810 and d500. Love them both this looks like those two combined on steroids. Now if it did have the EVF with a mirror lockup and phase dect af on the live view rear screen . It would spank some serious butt. Can't wait to see what Nikon does with their mirrorless camera coming up.

"autofocus point coverage could be 130-percent" - can someone explain why and how?

or just how it is on D5 now

the slides are in chinese

About freaking time! For wedding photographers this is huge! No more church ladies saying you can't shoot the ceremony because it's too distracting. 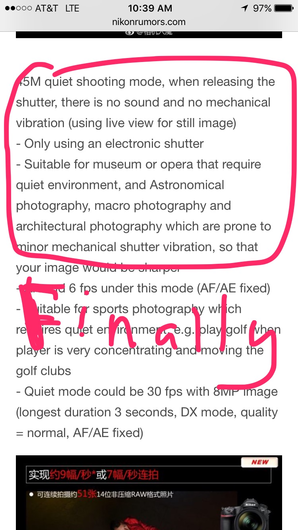 but live view, and we all know how terrible is nikon with live view AF :)

Well I do not know where your church ladies come from but I have never been asked by anyone that my camera is loud :) and D4s is pretty loud haha so silent mode feels beneficial yet D810 can not compare to D4s in low light so if D850 does might be using it instead for it :)

46mp and ISO 32 alone are enough to make this a landscape photographer's perfect camera. Not sure I understand their desire to always mix SD with XQD, but then again, the the universe is full of mysteries. Would've been easier to just stick with CF in my opinion. Will pre order as soon as it's announced.

I think they're betting on XQD being the future of camera storage. A backup SD (rather than QXD) is probably there to cut costs and allow some compatibility with the cards people already own.

Ok, that is not Japanese, yall. IT IS CHINESE

I have to say I was looking at a used D4s in Aus , but the D850 with battery grip at 9fps with grip and 51 shot buffer 14but raw (D4s has 11fps & 78 buffer ) and giant 42mp sensor maybe not now. With 42mp you can crop in if needed and still retain significant sharpness. Drooling.