After taking the top end of the market by storm with the Z 9, Nikon looks to secure the other end of the spectrum with a camera designed for social media creation.

The other day, my sister came to me for camera advice. As any photographer will attest, this isn't an unfamiliar request. Especially in these days of social media madness, everyone wants “good pictures.” Whether they have any interest in learning photography or not might be another question altogether. But whether it be to start a vlogging channel on YouTube, spice up their Zoom calls, or just find a better way to live stream to the followers on a chosen platform, there is a large and growing segment of the market dedicated to creating the most content possible, in as easy a way as possible, for the least amount of money. 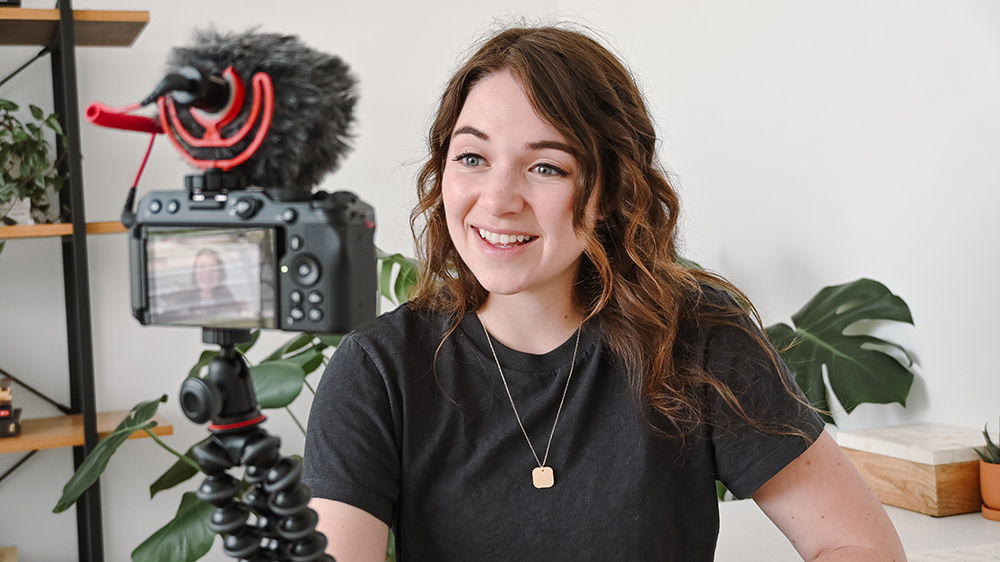 Now, full disclosure, I don’t personally tend to fall into this category. I’m the type of person who requires a full lighting package, 10-ton grip truck, and a full hair and makeup team just to take my passport photo. I’ve been passionately studying the craft of photography and cinematography for decades now. I do it professionally. And I put every ounce of my knowledge and soul into each individual frame. At this point, I think I might be clinically incapable of simply pointing and shooting.

My sister, on the other hand, just wanted to start a vlogging channel. It’s for her business. And she wanted it to look good, but, at least to start, she had neither the time nor the inclination to learn all there was to know about the exposure triangle or the technical reasons for shallow depth of field. What she wanted was simply a camera that would just work — a camera that would keep her or a product she’s displaying in focus, that would do the vast majority of the heavy lifting for her, that would allow her to get a great-looking image without breaking the bank.

Because I am a self-professed Nikonian and have grown to really trust the brand implicitly over the last couple decades, my first reaction when someone asks me to point them to a camera is to try to find something in the Nikon lineup. It doesn’t always work out that way. People have different needs, and while Nikon cameras have suited my needs, it doesn’t mean they are the right solution for all. Yet, I really wanted to keep my family in the Nikon family, and so, I searched up and down the lineup for a camera that might be a good fit.

Of course, my love for my sister trumps my love for Nikon, so I also did my due diligence and looked at the offerings from every other brand. At the time I was looking, Sony and Canon seemed to have solid offerings aimed at the vlogging market. More importantly, at that particular time, Sony was running a sale that made their offering very hard to beat in terms of pricing. My sister ended up going with the small Sony and, as far as I can tell, it seems to have worked out just fine. Yet, I was still wishing I could have found a Nikon offering in her limited price range that would have better fit the bill.

Well, for those wishing for a Nikon camera that suits all the needs of the current social media creator on a budget in a small and easy-to-use package, the wait is over.

Today, Nikon announced the long-rumored Z 30. It is a video-centric camera aiming to do for the entry-level end of the Nikon line what the Z 9 has done for the top. It is small, compact, and affordable. With a 21 MP DX CMOS sensor (20.9 effective megapixels), a fully articulating screen, and eye autofocus (including with video), it is purpose-built for the user who wants to turn the camera on themselves. It’s got built-in stereo sound, a 125-minute record limit on video, and can be powered either by battery or even AC power for those wishing to use it to glam up for extended zoom meetings. It shoots 4K up to 30p or Full HD up to 120p for creating slow motion effects without an additional crop. 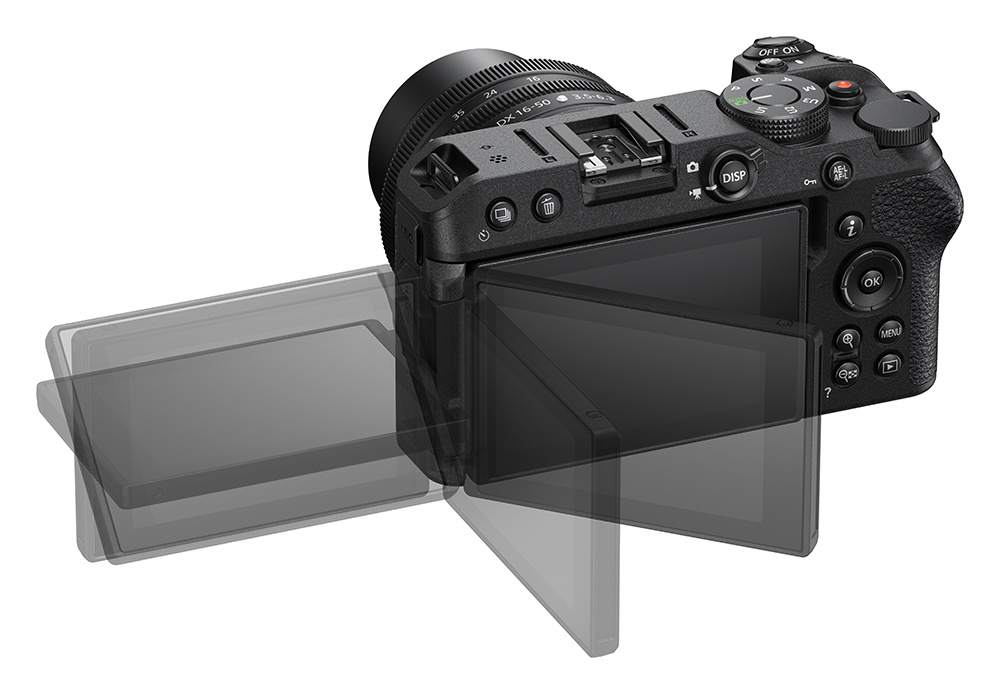 The camera does not have a viewfinder, nor does it have the extended video formats and features of Nikon’s top line cameras. This is an entry level camera, after all. So much of that is expected considering the price point and placement in the Nikon line. But it still provides top-notch video for an entry-level user looking to get the best image they can onto their chosen platform in as short an amount of time as possible. It also comes with many traditional Nikon attributes such as the Z mount, allowing it to connect to Nikon’s entire line of high quality glass, customizable function buttons, and adds a more prominent video record button to offer even more emphasis on video creation.

This is a camera firmly aimed at the user who will spend as much time in front of the camera as they do behind it — someone like my sister, who needs to travel light (the camera only weighs in at 405 grams) and wants to have a tool ready at the drop of a hat to capture her story and share it with her followers in as expeditious a way as possible. It’s an entry point to the Nikon line for those looking to explore the possibilities or image capture beyond their phones. It’s for those who want quality at a lower price point, who want to create, learn, and capture. It’s not the end of a photographic journey. It’s the beginning of one. 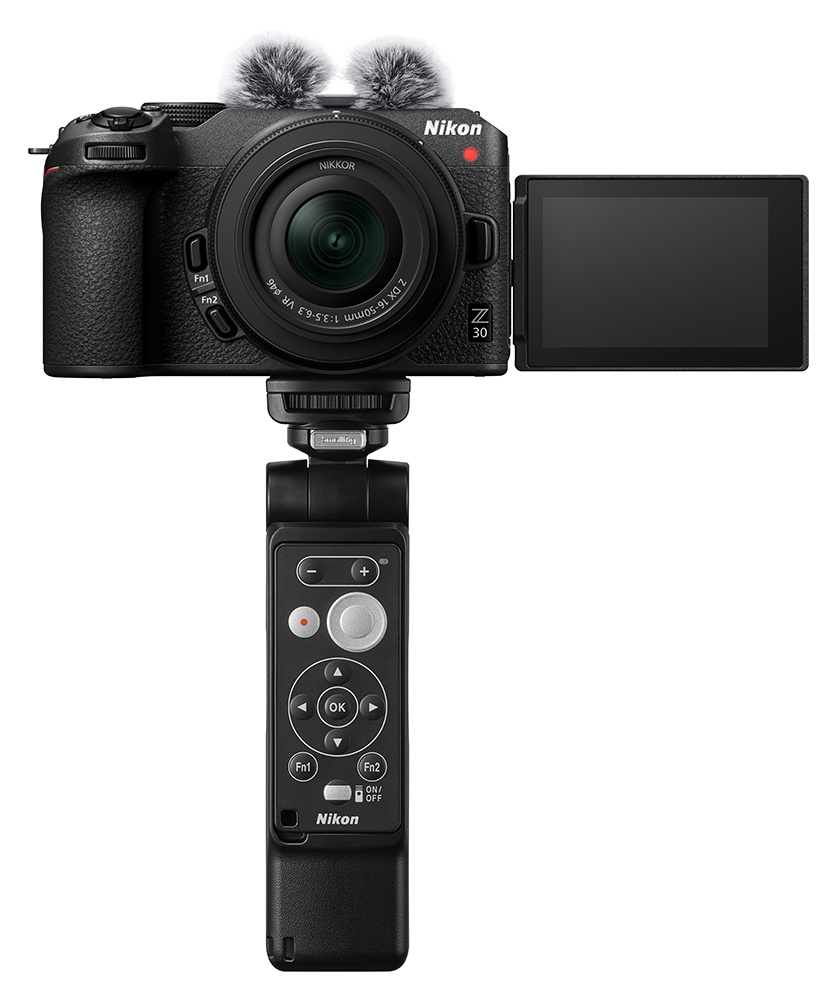 Nikon has been smart about fulfilling the needs of high-end users with the Z 9. And their mid-range cameras like the Z 6 II and Z 7 II are used and enjoyed by photographers the world over. With the Z 30, they are expanding their reach and widening the outer boundaries of their product line.

So, what do you think? A good move? Might the Z 30 be a good choice for the burgeoning creator in your house?

Gear / September 25, 2021
My Review of the Nikon Z fc: Does the Retro Style Add Any Value?
Log in or register to post comments
9 Comments

Good move: Reclaim some of that market share Sony has been taking for granted when they paused production on their APSCs, and from Canon APSC users as well. Going to be an uphill battle to beat iphone vloggers though.

Is there any stabilization (digital or otherwise) built into this platform? At that price, I'm going to guess no?

It relies on in-lens and digital stabilization. No in-body sensor based stabilization, which is understandable. We'll have to see how good the digital "e-VR" stabilization is...

Thanks for that info! A bit dubious if the feature isn't part of the marketing push though. What I mean is, I've read 2 articles and watched 2 review videos, and nobody mentioned the e-VR, so perhaps its just not that good?

Nikon's official page for the Z 30 lists it as a feature.
Might not be that good though: it's probably best to shoot a bit wider and stabilize in post if you're going to be unsteady 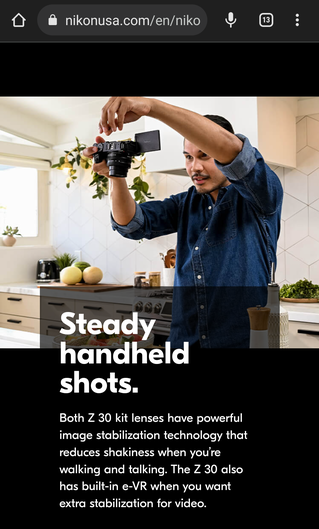 It has VR built into the 16-50 lens and eVR built into the camera which works ok. It smooths out the shot if you're filming while walking or something like that. I'm sure there are cameras with better systems, but for what it is it works decently.

I'm a photographer first, and not someone who tends to point a camera at myself a lot, so having no viewfinder kills it for me. Assuming it's a long term investment, and not wanting to spend twice as direction changes, I'd say skip this and get a ZFC. It weighs about the same, has all the wanted features, and has a viewfinder. My personal fun-cam is a Z50 with an FTZ adapter because, for me, it has a more comfortable grip than the ZFC.

Definitely doesn't sound like you're the target audience, and that's perfectly fine! This target audience is more than likely video first, and used to taking photos without a viewfinder (cell phone photographer generation). I don't see much advantage to repackaging the guts of a ZFC into a new body though, now that you've made me think about it...

Well, I mean it is $250 cheaper than the Zfc while being essentially the same camera minus the viewfinder. That's a pretty big reason to go Z30 vs. Zfc.

I rather like my Z50 for recording the not-so-great YouTube videos I make. I like the flippy screen on this one and the ability to power it through the USBc connector, neither of which my Z50 has. I can save $650 by connecting an external monitor or small tv to the hdmi out and pick up one of those dummy battery power pack things on Amazon for like $50.