I shoot with Nikon Z. I really like the system, and I’m excited to see Nikon making a clear commitment to the high end of the lineup. What I don’t like is the pointlessness of these pre-pre-release announcements.

The Nikon Z Roadmap Is a Mixed Blessing

One thing I thought Nikon and Canon started getting right with the release of their mirrorless systems was the relatively clear and concise roadmaps they provided. I bought in based on the first lenses they released and because of the clear promise of lenses to come. For the most part, they’ve stuck to the major mile markers of that map, and everything has been good. 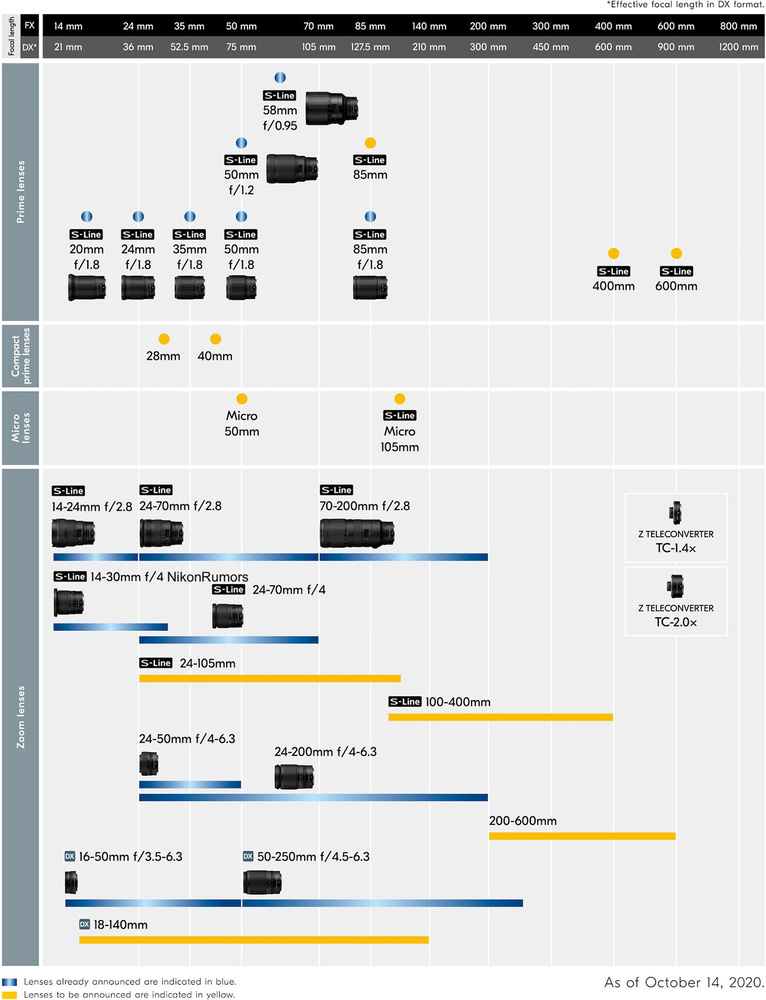 Unfortunately, that roadmap has started to be forgotten. New teleconverters and lenses that weren’t on the map were released, while unreleased lenses have started to pile up. With over 10 lenses to come, but only a few lenses released each year, it seems that this could represent the next couple of years of glass announcements from Nikon, but currently, there’s nothing more than rumors and supposition about when things will actually come out.

This uncertainty might be what Nikon wants: it could make people eyeing a switch to another system question their decision. After all, that lens they need or want might be coming out soon! It also lets them grab headlines and articles (yes, like this one) without having to do anything more than update a graphic. After all, while they haven’t contravened the roadmap yet, they aren’t bound to it by any means.

I question whether these benefits are actually worth it, however. One of the most direct impacts of dangling the promise of future releases is that it costs sales today. Would any Z shooter buy the perfectly competent F mount 105mm macro with a Z version coming soon? The same goes for the 80-400mm, 200-400mm, 200-500mm, 400mm, and 600mm. These are all good to great lenses, and represent anywhere from $1,000 to over $10,000 in revenue, but unless you need one today, would you think twice about buying one?

Before the Z 9 announcement, I think many D6 or D850 shooters who weren’t yet committed to the Z system wouldn’t let a roadmap for a mount they weren’t using affect their decision. But now, the messaging from Nikon is pretty clear: they see Z as the future and the high-water mark for their cameras. Especially for things like the super-teles, which can be a significant investment with a long expectation for service life, the mount is going to be more of a factor.

Why The Z 9 Announcement Is a Mess

The Z9 has been rumored for a while. Now that it’s actually scheduled to release this year, let’s take a look at what info Nikon has provided.

Surprisingly, it’ll include an image sensor, a processor, and support video. As the flagship, it’ll also “deliver the best still and video performance”. That’s a pretty underwhelming insight into the camera if you ask me. If you were a F mount or Z mount user, do you feel reassured that this will compete with Sony’s Alpha 1 (my guess as to the intention behind this pre-pre announcement)? If you're an F mount user, is it clear what this will add to encourage you to jump from that D6 or D850 over to Z mount?

Since the company’s been plagued by doom and gloom prognostications over the last couple months, you can look at this announcement through one of two lenses. The first looks at this as a return to form for Nikon, bringing together their technical prowess together with their lens design skills to create a great combination, able to compete with any camera out there. The other view could paint this as a move from weakness, trying to catch up to a newly emboldened Sony, but without much to show for it. That mentality results in a few banal lines about how our camera will be good too, once it comes out at some point this year. Depending on how charitable you want to be when reading this announcement, I think you could take it either way — that’s hardly a strong marketing message to send.

What’s particularly galling as a photographer is that this all seems to be an exercise in vaporware, delays, and creating uncertainty. Consider the Z 70-200mm: first announced in January 2020, delayed before its release in February, finally supposed to ship in fall, and still not consistently available now a year after the supposed release. That 70-200mm is a bread and butter lens for many photographers, and while the business environment of 2020 was understandably difficult, these issues were present before COVID was widespread. The same scenario is playing out with the Z 7 II, with availability inconsistent months after release.

The roadmaps and the announcements don’t mean much if dates slip many months into the future. Frustratingly, this is a mostly solved problem for other technology companies. When Apple sets a release date for their iPhones, there are phones in UPS trucks on that day. DJI got me a drone the day of release all while being economically blacklisted by the US government. Other tech companies making equally complex products are able to stick to their commitments to customers. Why are camera companies (and this seems to apply to all of them to some extent) dropping the ball?

With that situation in mind, it makes these announcements of future announcements seem silly. Do many photographers really expect they can add a Z 9 to their cart at B&H and actually get it in 2021, given past performance?

The Moral of the Story

What I know as a customer, however, is that I don’t like this practice. Open transparency, like with the roadmap, can be great. It requires a commitment to consistency and good faith, however, and announcing nothing more than a camera name in reaction to a competitor’s release is not helpful to anyone.