Jeffrey Mckee is a Lawrence, KS-based photographer and a graphic designer for the Spencer Museum of Art at the University of Kansas. His colorful portraits, created with Polaroid instant film, evoke a sense of dreamy playfulness.

Like so many 20th century processes, Polaroid photography is a format far less common than its digital counterparts. However, equipment and film for instant photography have been made more accessible in recent years. Efforts to preserve Polaroid’s legacy, like those by The Impossible Project, have made it possible for photographers like Mckee to continue utilizing this medium. 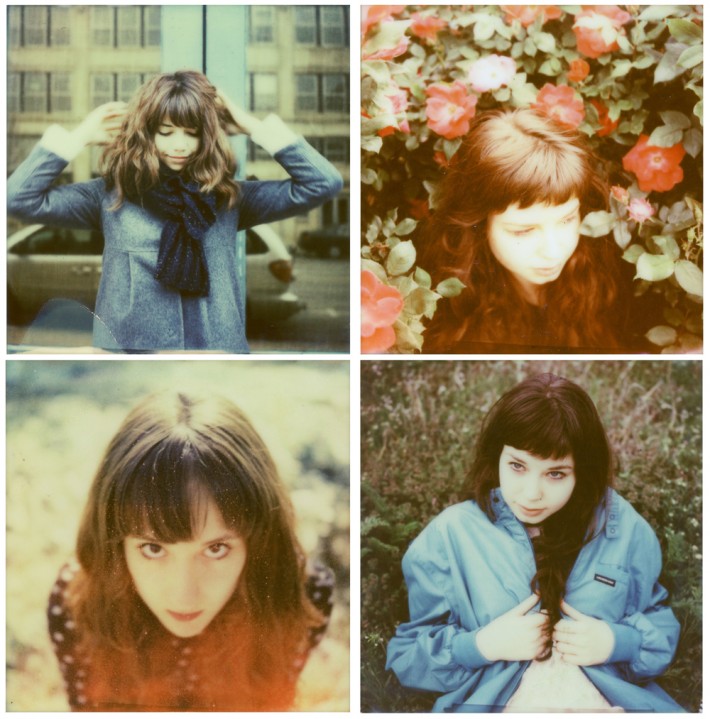 Although he has always enjoyed casual digital photography, Mckee says it wasn’t until finding his first 35mm film camera, a Pentax k1000, about four years ago that he “really started feeling the joy from [taking photographs]”. Photography also served as a form of discovery; “I moved to a small town and used it as a way to explore…and find interesting things.” A few months after beginning to shoot 35mm film, Mckee began to experiment with instant film as well.  Describing his first experience with using instant film he says, “I had an SX70 sonar that I’d bought in an antique shop a few years earlier but never used it. The first time I loaded a cartridge in it, and it came alive like a tiny robot, I realized the beauty of its simplicity.” Mckee also shoots with a Polaroid Spectra.

I spoke with Jeffrey Mckee about the experience of shooting instant film, the crossover between graphic design and photography and film’s place in modern photography:

Polaroid film is almost its own medium at this point. What do you most enjoy about shooting Polaroids?

I totally agree. It's something that was used originally for its immediacy and I think that's still one of its biggest draws. Seeing your film developed right in your hands is a bit like magic. The softness and other-worldly quality of its images is something that I think people embrace in our hyper-digital world. Plus, Warhol shot about a billion of them so it can't be all that bad.

Are there any drawbacks to working in this format?

When you screw up a shot it’s particularly painful ;)

Most of your Polaroids are portraits. What do you usually look for in a subject?

Mostly I like to photograph people who look interesting or if they’re someone I know, I like to see what they’ll look like through the lens and on the film. Honesty in an image is very important. I also find that people like to see their portraits on this film. If someone made Polaroid mirrors that we could all look at every morning, I think a lot of people would be late for work every day.

You work as a graphic designer for the Spencer Museum of Art in Lawrence; art is very much a part of your life. Do you take inspiration from graphic design for your photography (or vice versa)?

I think being a designer has informed lots of things in my life, photography is one of them. I didn't used to feel this way, but I see them as being very similar in their nature. Saying something directly and in an interesting way is what I strive for in graphic design and it's also what I want to do when taking an image. Things that are direct are very special to me.

You recently did a promo shoot for La Guerre, and have done promotional photography for a local burlesque troupe, Lawrence Burlesque, shot with a mix of film and Polaroids. You were approached for both your shooting style and the fact that you shoot film. Do you think there's an increased demand for non-digital photography?

Digital images have never been able to feel the same as film to me. I like digital photos for what they do as well, it's just that personally I get more out of shooting film and I think the enjoyment comes across in the photos. Shooting with film is very particular, and I think the demand for it might come and go commercially. People who want their fashion line or their album cover or their editorial etc to have that particular feel will demand it. For people who shoot it just because they love it, it will hopefully never go away... and that's pretty beautiful. 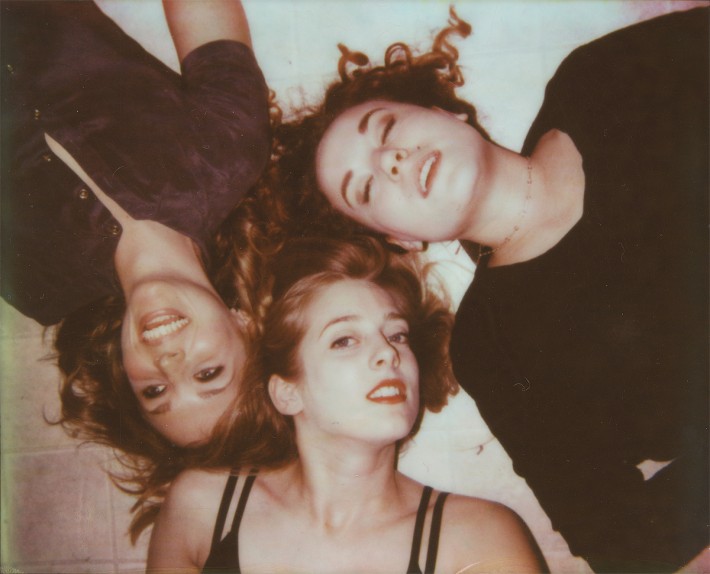 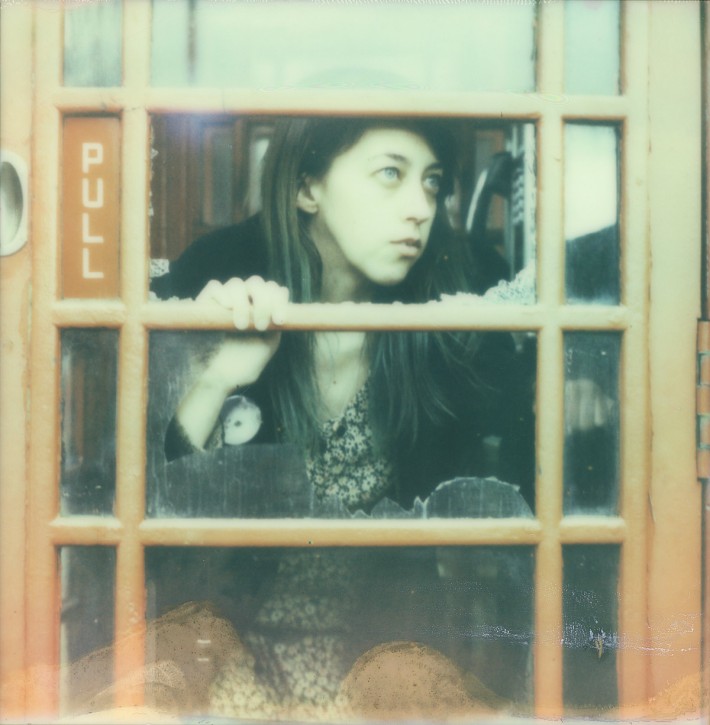 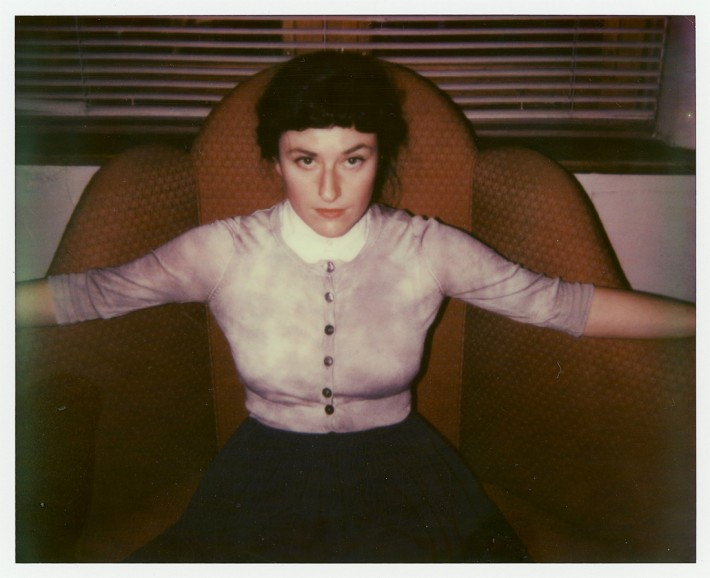 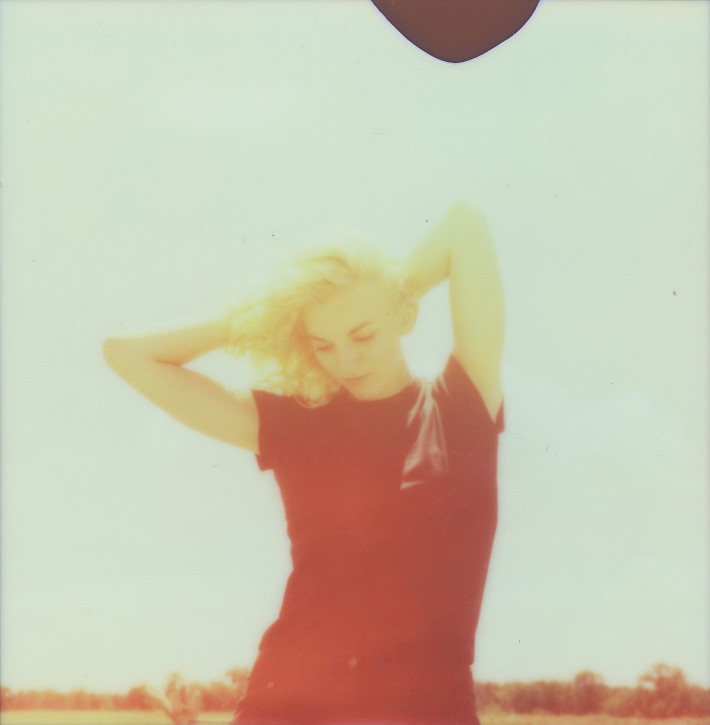 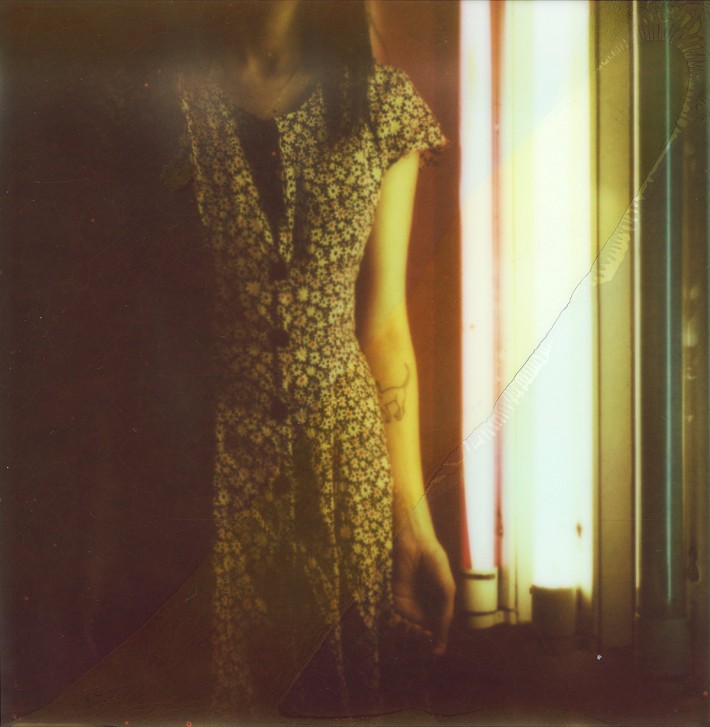 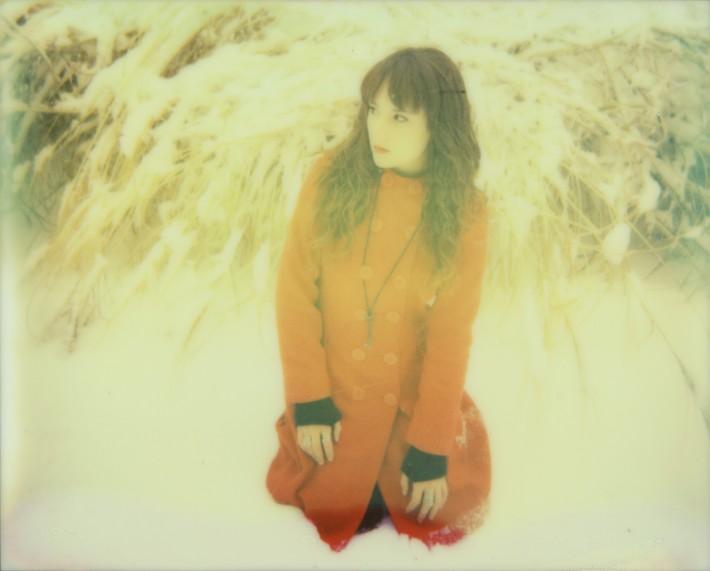 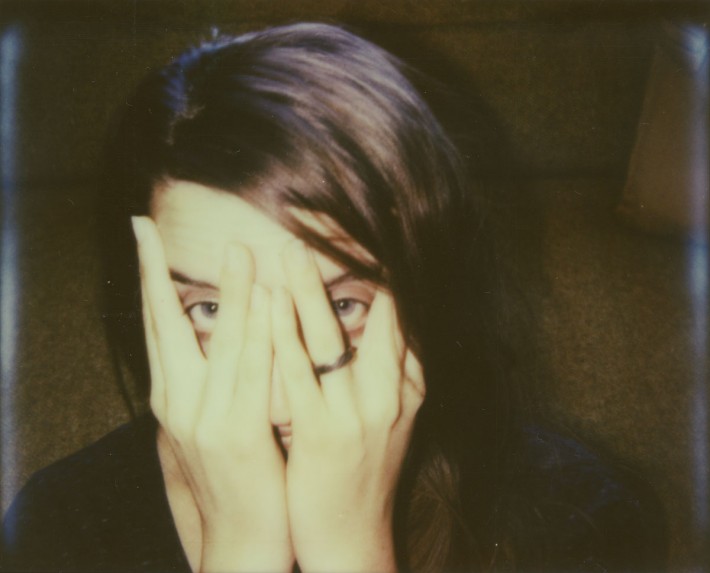 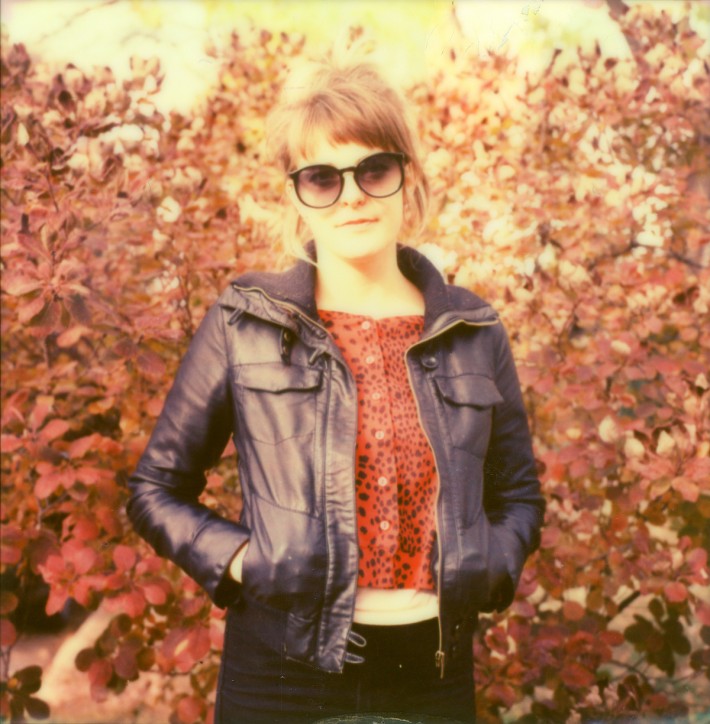 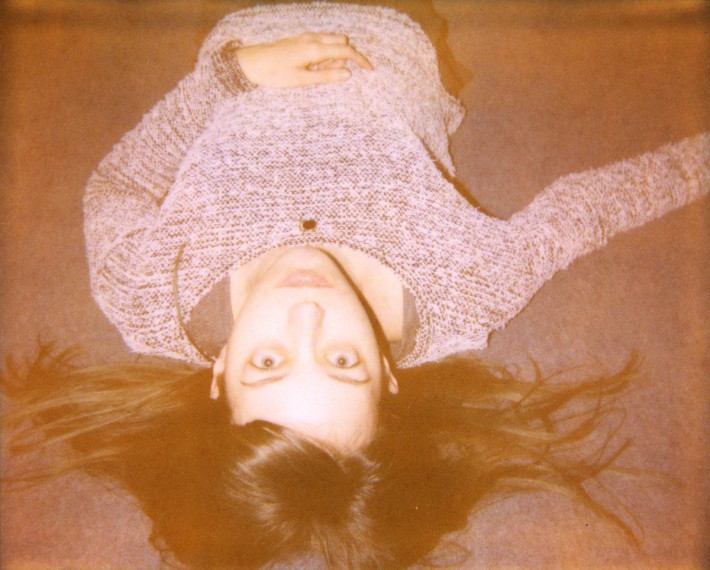 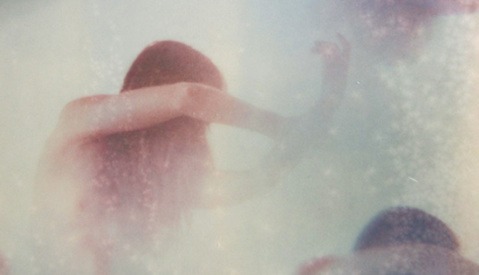 New
Living Stills: How to Animate Your Photos
With Shavonne Wong
$89.99
Log in or register to post comments
12 Comments

If they are using actual Polaroid film then it has probably long since expired and that why these shots look like they do.

If you take a look at the image of the woman in the red dress you can
see on the top where the chemicals dried out and didn't develop properly
so these were definitely shot on expired film.

I wonder if Polaroid film that expired could work at all.

Yeah you can find it on ebay but places like the FilmPhotographyProject.com sell batch tested expired polaroid film.

Hmm, so, photo-chemical Instagram. Not sure which is worse.

So you are comparing an authentic analogue medium that was the first of its kind and one that was and still is a revolutionary way of creating images instantly to social media app...

No, I'm comparing the LOOK created by using outdated Polaroid film to it's digital app equivalent. I don't know if you were around when Polaroid was a player, but fresh Polaroid color print film doesn't look like that. It looks like what it's supposed to look like, a high-quality print.

Absolutley, i know where you are coming from. Fresh FujiFilm FP-100c for polaroid pack film cameras looks nothing like these pictures but this type of expired instant film photography has become it own sub genera of instant film, in a similar way to how some people shoot with expired roll film

Yeah, you used to be able to get Polaroid in 8x10, allowing you to make a full resolution first-generation print directly from a large-format camera. Kinda overkill I suppose, but, well, those were the days. :-)

If I may chime in, from what I know, the impossible project uses varying processes to create their films, some of it sort of experimental i guess. With that being said, I think they are sort of meant to vary to an extent roll to roll. I could be completely wrong and i am too lazy to actually click the link above and inquire further. Regardless, maybe the idea isn't to get super fresh looking Polaroid's such as a i do with FP100c, but to be a bit experimental.

Yeah, they may be going for the Lomography angle if they can't get the proper manufacturing and quality control they need. It's appears Mckee is using outdated Polaroid stock however.