Activists are calling for all charges against a photographer to be dismissed after he was beaten by police multiple times after photographing them enforcing a coronavirus lockdown.

The incident took place on May 15 in Meqheleng, South Africa. Paul Nthoba, owner and editor of Mohokare News, a local newspaper, was photographing police who were on patrol to enforce the coronavirus lockdown. According to reports and Nthoba himself, one of the officers yelled something offensive about his mother at him, prompting him to approach them. When he did, the four officers proceeded to physically assault him and claim he was not authorized to take photos of them. Nthoba played an audio recording of the attack for a representative of the Committee to Protect Journalists, during which the blows can be heard along with demands to relinquish his phone.

Nthoba was then charged with obstructing law enforcement, which carries with a penalty of a fine and up to six months in prison. He in turn went to the Ficksburg police station to file a complaint. Initially, officers refused to give him a complaint form, but eventually did when a retired officer who is a friend of his advocated for it. While he was giving a statement, the same officers arrived and proceeded to attempt to take his phone again and beat him when he resisted. A senior officer who witnessed the second incident told him he should not have photographed the officers. After a detainment in a holding cell, he was charged and released, then given back his phone.

Nthoba was treated for face, mouth, head, and bodily wounds, as well as internal injuries at a local hospital, after which he went into hiding for fear of further harm and retaliation. Nthoba's lawyer, Dan Thulo, has said he plans to pursue a civil claim due to the incident. A police spokesperson said they would not take any action until receiving a report from the Independent Police Investigative Directorate. A spokesperson for the directorate confirmed the receipt of a complaint and that Nthoba had been charged for failing to show a pandemic work permit. Nthoba claims he had a permit but was never asked to produce it and that his charges do not match this.

Authorities must do the right thing and immediately drop the charge against Paul Nthoba, who was insulted and gratuitously assaulted by police for simply chronicling them at work. For the same officers to feel so emboldened that they could beat him again, this time in a police station in front of a senior officer when he sought to open an assault case, is beyond belief. Authorities must not let them get away with this violence and intimidation toward the press.”

Nthoba is due in court on August 27.

Posted In:
Legal
News
via:
Committee to Protect Journalists
56 Comments

BuT PhOtOgRaPhY iS nOt aN eSsEnTiAl SeRvIcE!

That phrase above is the wet dream of every dictator ever since the invention of the film camera.

Mr. Zucareli Im afraid there is a problem with your typing. I had caps lock on for a while by accident before I saw the little green light on. Its hard to see sometimes, but you might want to check it by a service repair shop. It looks like the connectors are not linked. I use to own a typewriter repair shop and saw this issue sometimes with some IBM Selectrics. Best of luck to you! Hope you get fixed!

There isn't a problem with his caps lock. It's a deliberate way of typing that's supposed to illustrate how stupid and impotent the people who say those kinds of things are.

He wasnt being genuine? Why not? Why not just say what he means?

because most people on the internet would understand what he meant.

But what about those who dont? I guess we have to be lucky and get kind strangers like you to help! Thanks!

I still think we should check his keys with a professional. Just in case!

Mr. ZUCARELI you have been very nasty and down voted all my posts. If you spent less time being so negative and more time being happy you would feel better and be a better person.

I will pray you stop being so mean and sad and find better things to do with your life! With love, Alfie.

If only there were someone with the courage to protest police brutality. perhaps they could kneel respectfully during the National Anthem as a recognition of the hypocrisy in the words which are true for some but not for all. Naaah. It's totally unnecessary and just a way to get attention.

LOL, kneel “respectfully”. Marxists were wise to ensure many Psychologists were among their ranks. “Put wings on pigs, but don’t freak out the squares so tell the rubes we’re doing it ‘respectfully’.

Ideological gaslighting at its best! 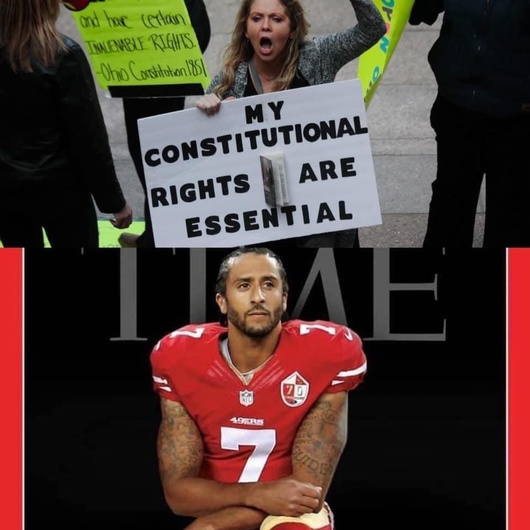 There was a man who did this in football games a couple of years ago that I remember watching. He sounded like a very caring person.

Let's say you're at your place of employment and you decided that you're going to protest something and you decide to do it on company time. What do you think would happen? Get a raise? Get a promotion? Told to pack your things because your services are no longer required? I'm guessing that you'll be looking for another job.

Football players are employees that are on company time when on the field. Should they be treated any differently than you as an employee? You wish to protest? Terrific! I'm all for it, but do it on your time, not company time.

They kneel down instead of playing the game? I thought that they just kneeled down just for the national anthem.

In Japan, protesting workers would wear an armband while working to show they were in prosest with the company. The job still got done. Same thing really.

That’s like my story with Nancy! All the Japanese people I knew at Brother we’re really good workers

Hello Mr. Pavlich! I was the owner of a typewriter store so I was a boss and my own employee. But I did have people that worked for me like one named Nancy. I remember one time (this was the 80s!) there was a march in town for gay women rights and Nancy wanted to go. She wanted to take sick time to go, but I said “No, you go. You care about this a lot and it is a important thing for you, so go and come back later!” She was very greatful and it made her happy, and it made me happy to make her happy and to do the right thing.

Afterward she worn a pin for gay pride that a mean man got upset about it one time but I said “She is a great employee and she does her job good. If the pin doesn’t get in the way of her doing the paperwork for invoices (that was her job) than what is the problem?” But he was just angry and I pushed back with positivity!

I didn’t give her a raise like you mentioned (that’s very gracious of you!) but I didn’t fire her or upset her. That would be cruel. I guess the point is that bosses have to care about their employees and it they do something that they care about a lot and it doesn’t stop them from doing the job, why would I hurt them and get in their way?

We have to love to be loved and let people care and fight for what they want!

And that's fine as you, the employer, gave her permission. That is very kind on your part and shows that you value a good employee. But that's not what this particular situation is about.

What if she decided to bring her friends from the protest into your business? Things change at that point. The football players were in their employer's place of business. If the kneeling was done outside the realm of the owner's business, I have no objection.

I was a business owner and would have probably followed your example. However, if it impeded my business, then things become very different.

I guess if she brought her friends in I would give them some lemonade (i remember it was hot that day!) and sell them a nice typewriter! Everyone is a potential sale and new friend! Gotta act positive and with love and all other things will work out!

That’s so nice to hear you would have done the same in your business! You sound like you are a great boss and are a caring person!

As I mentioned in my post, I was a business owner. I'm retired now.

Me too! Sorry I didn’t read that part. Ill fix my post: you sound like you USED TO BE a good boss and USED TO BE a caring person!

You say you would allow protest as per Alfonse's example if it did not impede your business. So in the example of Football does kneeling impede that business?

Yes. Did you see what happened to the NFL's viewership? It dropped precipitously and that means less advertising revenue. It's a business first.

Oh no! NFL lost some money?! Clutch the pearls.

Football players are not employees. They are contractors. Big difference, from a legal and financial standpoint.

I remember, Brian McCarthy, the NFL spokesperson said, "Players are encouraged but not required to stand for the anthem."

Okay, but they are still being paid to work and are on the company's time, there for they protest on their time, not the company's time. Besides, show me in their CONTRACT that they are allowed to protest. They are after all, contractors that are bound by a contract. Maybe their agents should have had that written into the contract: My guy can protest while he's supposed to be working. That should about cover it. "Rolleyes"

Doesn't matter, though. It's all blown over and the mediocre at best QB is still in civilian clothes. The whole crux of the matter is that the guy just wasn't good enough to go through the crap storm that hiring him would have caused.

Show me in their CONTRACT that they are NOT allowed to protest.

Then why do you even care? You don't have a dog in this fight.

I'm a Yank, a landed immigrant here in Winnipeg. My wife is the Canadian. Born and raised in NE Ohio, but a Who Dat in the heart as I lived in New Orleans for 20+ years.

I worked for an international contracting company. Our scope of work was dictated by the contract. ANYTHING that wasn't in the contract had to be decided by negotiating an adendum to the contract. If not, it was a breach of contract and there could be penalties involved.

Saying it isn't in the contract is a non starter. Contracts are negotiated for a reason and that is so that both parties are fully aware of dos and don'ts. If they want to protest on company time, they can call their agent and have it added to their contract. Otherwise, they don't do it.