Skier Falls Into a Crevasse and Documents It With a GoPro

Those who have never been on a glacier may not realize how big a crevasse can be and how dangerous falling into one is. Last December, Jamie Mullner while skiing in Zermatt discovered it all within a few seconds when he tripped and ended up at the bottom of a crevasse. He wasn’t injured, but happened to have his GoPro on and documented the accident. The video is quite impressive but also surprising!

The beauty of small action cameras such as a GoPro is probably found in the fact that it makes documenting any moment of our lives very easy. Even those instants that last a few seconds like in Mullner case. Falling into a crevasse is something almost impossible to see coming and thus capturing footage of it is quite unique.

It’s impressive to see someone fall about 60 feet and not be injured, just as much as it’s stunning to see the interior of a crevasse. But what stuck me the most is the calm with which Mullner reacted. Most people would probably be in shock, but right after falling he simply mentions to his friends the fact he had the GoPro on and recorded everything… Even more surprising, his friends asking him to stay put but to capture a few stills and videos! It can make one wonder if the obsession we have developed for epic and viral content hasn’t gone too far… and if not, how far it will go in the future! 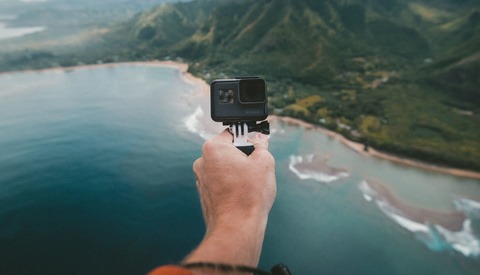 That guy is so lucky. I don't know how he didn't get hurt.

Was it just me or was anyone else waiting (and maybe hoping) for a Wampa to come lunging out of the dark? lol

While a crevasse is no joke, sometimes, you can be ok.

This reminded me of a story my ski guide in Austria told me about. His friend fell off a mountain and ended up ok, then posted the video to YouTube. It was also recorded on a GoPro -

- the fall starts around 1 minute in.

I don't think an obsession with viral content had anything to do with this. People have been having fun on mountains since long before GoPros, and it looks like for these guys the recordings were secondary to the skiing experience.