Apple’s ads claim “studio-quality” portraits are possible on the iPhone X, and, according to a regulatory body known as the Advertising Standards Authority, that claim didn't sit right with a couple of people. So they investigated.

The U.K.-based ASA came to the conclusion that Apple indeed could keep that claim. The company argued “that there was no industry standard definition of ‘studio-quality’ portraits” and that studio-quality was a subjective term, given the wide differences and skill levels among photographers working in a studio.

Apple additionally argued that the 50mm equivalent lens in the iPhone X was commonly used in portrait photography and that the lighting options could emulate what could be done in the studio.

Without any official definition of what constitutes “studio quality,” the ASA agreed with Apple and didn't uphold the complaints.

Indeed Apple’s phones have ramped up their photo game in the last few years, adding dual lenses with the iPhone 7 Plus and the ability to emulate shallow depth of field through software, and the iPhone X adding different faux-studio lighting effects to the party. To the average viewer, there is very little difference between a cream-of-the-crop photographic lens like the Sigma 50mm f/1.4 ART and an iPhone X toggled to portrait mode.

What do you think of the iPhone’s photographic abilities? Can it match what can be done in the studio or is that just plain crazy? Should the company bill its phone’s camera as “studio quality”?

Well…Michelin is a trademark, so probably not. But they could certainly claim 'gourmet style burgers' or even 'haute cuisine style' burgers and nobody would bat an eye (except perhaps at the absurdity of it). And honestly the work coming out of the iPhone with a good photographer is certainly better than a lot of crap we see from wannabes with a studio and rich parents.

No, but McDonald's pretty much outsell any 5 star (even though it's only up to 3) Michelin rates Burgers.

Haha.. OK, 3 star.. But it's not about qty of sales.. Its about quality of product (just like studio shoots vs iPhone) so saying burgers are like a 3star chef burger not only ups the value of McDonald's, it downs the value of a 3star chef. But starving kids in Africa would give both 2 thumbs up.. (starving kids in Africa compared to newb with their phone who've never actually had a real studio portrait to know the difference)

some people are about to lose their minds.

And be a proud member of the iCult

Wait until someone shows up at a studio for a family photograph and the shooter has a phone sitting in his/her carbon fiber tripod. Or a bride sees the photographer she just paid several thousand dollars to shoot her wedding has a pair of phones on his/her hip. I know....I'm just pointing out absurdity by being absurd.

Looks like Big Brother tech giant got the Big Apple indeed. The minutia of words is something like “beauty is in the eyes of the beholder”. Is there no end to fighting over subjectivism? I may go back to two cans and string to talk now pluse my instamatic of years gone by. I have allowed the enemy for my attention to distract from anything of real value. Yikes

"To the average viewer, there is very little difference between a cream-of-the-crop photographic lens like the Sigma 50mm f/1.4 ART and an iPhone X toggled to portrait mode." Who are you polling?

Anyway, I think they should claim whatever they like. If people like the results, that's good. If they don't, they've learned a lesson.

The company argued “that there was no industry standard definition of ‘studio-quality’ portraits” and that studio-quality was a subjective term, given the wide differences and skill levels among photographers working in a studio."

Before the phone came out I was anticipating all the bigger YouTubers to do a comparison between the X and actual studio lighting but sadly that didn't really happen. :(

That said, I did a poll on my Instagram stories just after the X was launched where I compared the portrait mode on the X to a 50mm 1.8 wide open and almost every single person (mostly who don't know much about photography) was able to tell which was which.

"To the average viewer, there is very little difference between a cream-of-the-crop photographic lens like the Sigma 50mm f/1.4 ART and an iPhone X toggled to portrait mode."

The iPhone 6s Plus unfortunately does not have dual rear facing lenses. I believe the 7 plus was the first iPhone to do that.

Oops! You are correct. Thanks for pointing that out. I should have known this because when I bought the iPhone for my wife, I specifically went with the 7+ for that reason!

10 years ago no one in the industry thought that a camera in a phone would be where it is today. I wouldn't bet against the army of engineers that Apple has deployed on the iPhone camera to further disrupt your industry.

Similar post on another site which had additional details and quotes which would indicate a contradictory ruling from the ASA. eg "phone mimicked what could be done in a studio" but "many effects, techniques and tools used in studio photography... (are) not available to someone solely using the iPhone X".

Forget about it.... why bother with skills and equipment when all I need is an iPhone?

Did anybody else notice that on the lede image, in the two "studio" versions of the photo, the iPhone had to decide where the model's right cheekbone was, it it did so very poorly?

It looks like she got hit in the face with a shovel. 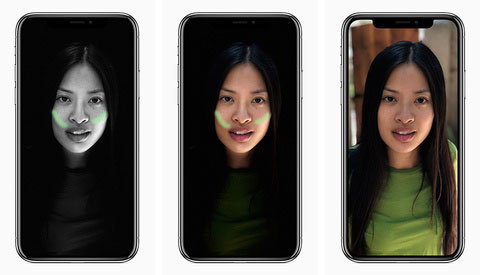 I actually use my iphone 7+ camera quite a bit professionally. For my Residential clients, I will take neighborhood attraction ( shopping, parks, etc) shots with the iPhone to include with the regular photos. The images turn out really nice. Really nice to just grab my phone vs getting in the back of my 4runner and fetching the camera every time I see something worth shooting as I drive to or from the property.