Can You Shoot Professionally With Just an iPhone?

There are dozens of articles pitting iPhones against typical pro-grade cameras. Dozens of iPhones shootouts. But, what happens when a professional photographer actually relies on an iPhone to shoot and deliver work to clients?

Jenn and Steve Van Elk are wedding photographers shooting out of Indianapolis. After experimenting with the new iPhone for a while, they matched up with a couple that was eager to experiment with them:

We saw a few shoots where people used iPhones to see if they would be a viable option. What we didn’t see was anyone actually shooting a full wedding with an iPhone 11.

The Van Elks covered their couple's day with two shooters equipped with their normal cameras and a third sporting an iPhone.

According to the Van Elks, perhaps the biggest benefit of shooting with an iPhone is how unobtrusive it can be. Shooting with a phone is going to let you blend in. Big cameras and bigger lenses can attract attention and ruin otherwise candid moments. In particular, the Van Elks note that the iPhone allowed them to shoot candid emotional moments throughout the day where the guests just didn't notice them as pro photographers.

No one paused and looked at the iPhone when we were shooting candids. People thought we were just another guest and treated us as such. Pick up a 5D Mark IV, and suddenly, that all changes.

Second, the Van Elks gushed about how straightforward it was to cull images that were already on your device. As any wedding photographer knows, downloading, rendering, and culling a day's worth of shooting can take hours or even days. Jenn Van Elk was able to cull and provide a mobile Lightroom edit to the wedding images on their drive home. In fact, their excited couple received a wedding gallery before the reception was finished.

The Van Elks feel that the iPhone lacked the creamy shallow depth of field that you can get from shooting details at f/2.8. This isn't a deal-breaker, but it does set the iPhone images apart from their DSLR counterparts.

The iPhone can force you to get too close during intimate moments. Shooting a first look from just a few feet away can be a bit intrusive in comparison to shooting with a 200mm lens.

The Van Elks also note that after shooting with DSLRs for years, using an iPhone throws off your whole shooting positioning.

On the subject of ergonomics, there isn’t a good button for taking photos. You’re either tapping the screen, which requires visual or audio confirmation that it was tapped, or you’re pushing the volume rocker, which is stiff and doesn’t feel good to push. Neither one of those things seems bothersome when you just take one or two photos at a time, but after 8 hours of constantly tapping the screen or pushing the volume rocker, you start to notice these things.

Practically speaking, the Van Elks explain that you should turn off passcode entry to get on the iPhone. Wedding photographers need to be quick on the draw. You need to be able to pick up your phone and start shooting at the drop of a hat, particularly during the reception. Likewise, they suggest that you turn off facial recognition, as the program may slow down the iPhone's response, leading to missed shots.

What do you think? Would you ever shoot a professional gig with a mobile phone? Do you think that in a few more hardware and software generations we'll see a big enough change that you'd be comfortable using a mobile as your primary pro camera?

Would we prefer to shoot with an iPhone 11 Pro? No. While we do enjoy looking more like guests, we’d rather have a device that produces consistent results. It’s bothersome in its current state. Also, we prefer the way the pistol grips and buttons feel with the DSLR/mirrorless cameras.

I have always enjoyed eating apples, but now looks like the apple may take a bite out me.....pun of the day

Hate to say it, but the photos look pretty good.

Agreed. I think a lot of it is talent. A pro will get great photos from a amateur camera. It's just that now phones are getting that good!

I've always heard "A good mechanic can get by with any tools but a great mechanic has the right tools."

They are ok. Honestly, they look similar to those who flood the wedding photography market with overly washed out beige filters. Id be curious to see the cell phone work under all the many difficulty lighting situations weddings bring up.

Yes you can but only in certain times of day. Also, imagine the client's thoughts when her hired photographer shows up with an iPhone! Even if the images are incredible, the first impressions would be terrible and the overall client satisfaction would likely fall.

I agree about the client's thoughts. In this case, the Van Elks discussed it with the client. I think you'd have to be up front about it.

Can you shoot unprofessionally with a 'professional camera' (whatever that means)?

Yes given favourable and average lighting conditions professional results can be got from many phones both Apple and Android, I am staggered at the results from my phone and it is now part of my armoury however the wedding party, family and guests may differ in their beliefs in that if the wedding photographer can use his/her phone then wedding photography must be so easy that ... anybody can do it, why hire a professional photographer?

Interesting turn at the end of your comment. I do agree, that having equipment that looks expensive does help guests understand the value of a pro. It's sad that gear distinguishes as pro from not a pro. Not the images and experience. Which, the Van Elks have.

"No one paused and looked at the iPhone when we were shooting candids. People thought we were just another guest and treated us as such. Pick up a 5D Mark IV, and suddenly, that all changes."

That statement says a lot. That there's a use for both in a practical way. Same reason that I use my EOS M and 22mm pancake or smartphone (Note 10+ currently) when I'm doing street photography or any photography that I don't want to be noticed.

Agreed. It's the same reason that rangefinders become so popular. And, now, look, the mirrorless cameras mostly look like rangefinders.
Good point!

I wonder if these were shot using the native automatic iPhone camera app (with deep fusion) as jpeg/heic or with a third party app with manual controls and raw?

These were all in great lighting, I'd love to see it coming pared to the 5DIV I'm very low light.

Great article, I upgraded from an iPhone 6 to 11 pro at Christmas so naturally the first thing that had my attention was the camera and it’s abilities. I decided to take a few snaps with the phone whilst out with my proper camera and this was the first effort. It’s not the same level of detail obviously but still pretty amazing, and the ultra wide lens is just crazy.

Interesting trivia, this stretch of coastline was where the opening scene of one of the Alien films, and closing scene of Get Carter were both shot. 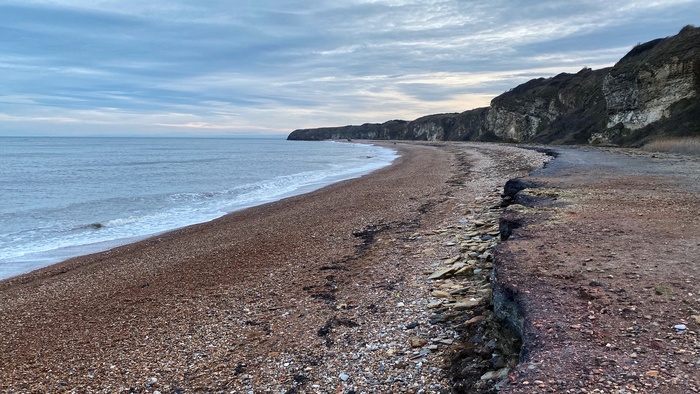 Fantastic! Which Alien film, is that the beginning of Alien 3? I'm assuming Get Carter w Cain?

Yep thats the ones, the opening scene of Alien 3 (with added extras for effect) and then the closing scene of GC where he shoots the guy on the beach, it used to be hugely polluted with mining waste but was cleaned up as part of the Durham heritage coast project, all the chutes for pumping the waste material out to sea were removed too. You still arent allowed to put your hands in rock pools but its obviously a lot better now.

Ridley Scott grew up in this area and has used quite a lot of landmarks for his films, Blade Runner for example has its sets based on the industrial landscape of Teesside, I think Joe Cornish has a few good shots of the chemical plants too, you can see the resemblance.

I've been telling myself my $80 Samsung J3 was enough for a year now, but this article has me thinking about getting an iPhone 11. Reading Fstoppers too often might just be bad for my wallet...

I need to test mine more, I’ve bought a tripod clamp for it.... but first impressions are the camera, lenses and functionality are all amazing for a phone.

I got the pro because I wanted the smaller size phone and i nearly cried handing the money over but they are definitely an amazing bit of kit.

See, that's the thing. I can't even fathom buying a pro given that I spent less than that on a new 8 core laptop and even my A7R2 cost less than that when I bought it used.

Of course, if you're fully invested in apple, the iPhone's pricetag pales in comparison to a 16" Macbook Pro with an i9...and I'm sure the Pro is just that much nicer than the regular one, too...

Perhaps I'm showing my age, but I have a hard time buying into something so expensive that I know will only last a year or two before it's out of date and I'll feel the pangs of GAS. To me, it's almost like a technology subscription - a really really expensive one.

If I told you I upgraded to an 11 pro from an iPhone 6 after it stopped receiving security updates, I’d had it 6yrs, would that explain? I don’t intend on this phone being obsolete in a ‘year or 2’, I expect another 6yr life cycle, I paid cash for it so no contract to tie to.

People who change phones more than their underwear are fools imo.

6 years is still too often when you're dropping $1k on a phone imo, but we likely have very different budgets.

They have gone to town on it with the finish and parts I will give them that, but it’s still a ridiculous price .. the normal 11 would be great if it wasn’t a Cm bigger each way