How NASA Photoshopped A Galaxy 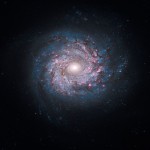 Did you know that every time you look at one of those amazing images captured by Hubble cameras you are actually looking at a composite image made up by as many as 1400 still shots? Did you also know that the colors you are seeing in those images are completely faked and added by scientists in order to show off specific details within the scene? This interesting timelapse video released by NASA shows exactly how they create their images by combining thousands of black and white RAW files from 3 Hubble cameras. Let me remind you, just because you see a lot of photoshopping in this video doesn't mean the final images are not real or falsely rendered. The technology needed to produce images this detailed requires combining multiple images and adding colors not normally seen by a human eye or even the most expensive cameras created.

Makes me feel better about my own efforts at astro photography! Even NASA photoshops their work to clean things up! :)

This is not a fraud. The galaxies do exist like in those pictures! They just used 3ccd cameras - different kind of those.

Those wavelengths has to be manually matchet to colors. After that it's just normal photoshop.

thanks you for making it slear to everyone! ;)

Wich is the name of the song?

@Erni, they tell you in the final credits :)

so.... if i actually fly up close to one of those galaxies, it won't look like how it appears in my coffee table book?

This is nothing new that they need to "fix" the images. in the film days they used blackwhite film and shot with color filter on it and then developed the print in color..
now I´m going to watch the vid in 30 min.. :D

This is nothing new that they need to "fix" the images. in the film days they used blackwhite film and shot with color filter on it and then developed the print in color..
now I´m going to watch the vid in 30 min.. :D

How can they tell a bad pixel from a tiny star? :P