Influencer Tries to Justify Posting Professional Images of Her Motorcycle Accident, Which Include Suspected Product Placement

A “lifestyle blogger” is trying to explain her actions after facing a backlash online for having a photographer friend document her motorcycle accident. The images drew particular criticism for appearing to have product placement with bottles of branded water placed in shot.

Based in Nashville, Tiffany Mitchell has over 211,000 followers on Instagram. She had a photographer friend traveling with her when she fell victim to a motorcycle accident that left her with some scrapes. Despite the incident, the photographer continued to take snaps, which Mitchell later uploaded to her Instagram page. In some of the dramatic photos, Mitchell is seen lying on the road receiving help, seemingly in pain. However, some of the photos also feature some conveniently-placed bottles of Smartwater. 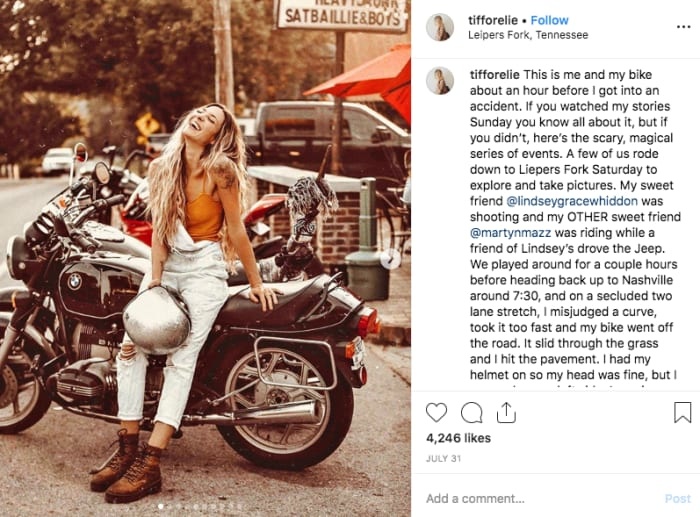 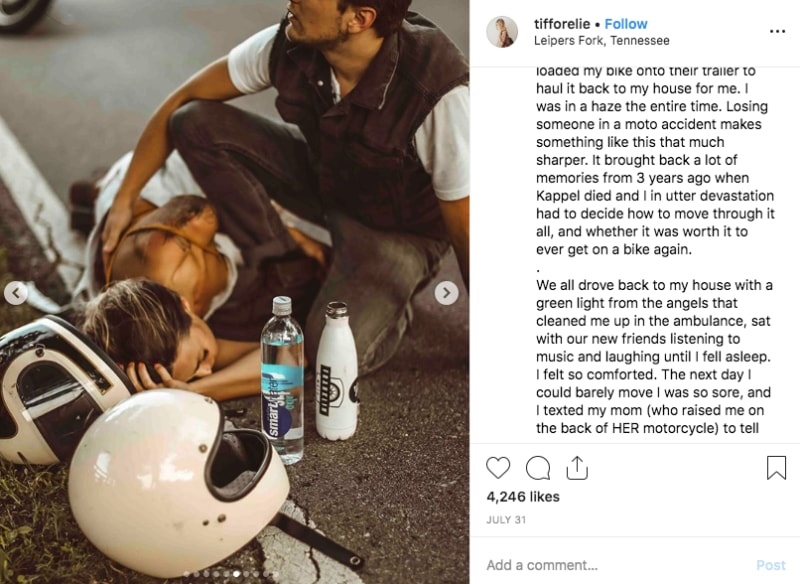 She has since told BuzzFeed News she “would never turn a very important personal story like this into a brand campaign,” and that she is sad people feel that way. She also asked them not to cover the story, because of the negative press it would receive.

Commenters were of course vocal about their feelings on the posts, making the observation it was “weird” to post professional grade images of an allegedly real accident. Of course, others were skeptical about just how genuine the images were. Mitchell claims she had no idea her friend was still snapping after the accident occurred. Quite how the water bottles made it to such a prominent spot of the photo remains unknown. 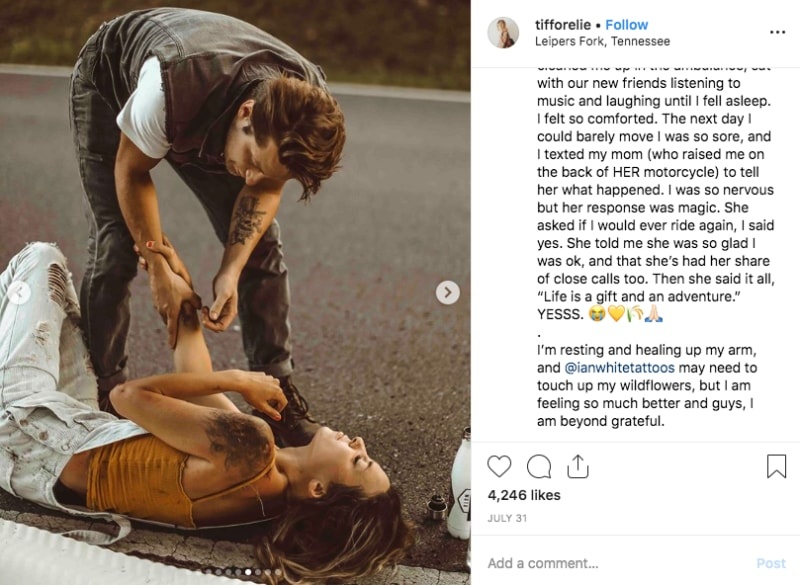 The posts prompted Smartwater to make contact with BuzzFeed News, to confirm they had no ongoing sponsorship with her. Quite bizarre, then, that their bottles should feature so prominently. Product placement has, over recent years, become increasingly common, particularly in the era of the influencer. Many influencers have continually proven just how desperate they are to appear popular, and as if they have many sponsors, and you couldn’t be blamed for suspecting Mitchell of trying to stage the photo as if to make it appear to be a sponsored post. As many commenters were keen to point out, both her bike and her helmet change between the before and after pictures. 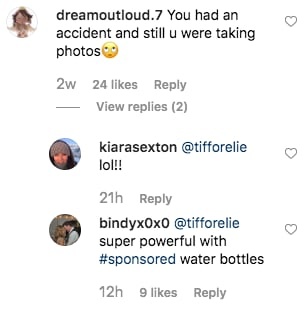 The whole scenario feels at best opportunistic, and at worst conniving. Either way, that a road collision can be considered a photo opportunity is alarming, and only further cements the lengths influencers are willing to go to in order to further their careers.

Seen this pass a few times. The Bint needs to know the real effect of coming off a bike without protective gear. More than makeup on the exact same places as her tattoos. Complete and utter bullshit.
Once again, a narcissist gets headlines, coverage and seen by even more people.
It boils my piss.

"boils my piss" imma have to use that one.

Some people require a lot of attention.

And every time the media picks up post like this, they play right into their attention seeking hands.

sometimes the exposition has the adverse effect... with sponsors bailling out

But we don’t have media anymore. We just have people who look at social media and at other stories online then they just repeat and add their thoughts to it. Very few do any research on their own.

Good point there. How much actual ‘news’ vetting’ goes on. You read a story, of its obviously false, you have a choice, ignore it, repost it with some research or blindly post it.
I’m sure the pressure of ad exposure income has influence on decisions.

This is so embarrassing for people to have to go to this length just to possibly have the hope that someone will see it on the internet. I've seen people go down in real life and it does not just end with a snapped overall and some "convenient scrapes". But I guess what else do you expect from someone who's job title is influencer?

I rode for well over a decade before hanging up my helmet permanently. Coming off at speed rarely leaves you looking that pretty...at best she fell off while posing at a standstill. At worse it's a complete setup.

Maybe shouldn’t have removed that helmet either! 🤷🏻‍♂️

how bottls got there unknown? i think is funny

So....um...."She had a photographer friend traveling with her when she fell victim to a motorcycle accident that left her with some scrapes. Despite the incident, the photographer continued to take snaps". Who is seen helping her in the photos? Is that her "photographer friend"? Did he set up a tripod? Or was that a bystander who came to help? Also, while I may be an amateur photographer, I am a "healthcare professional" with over 30 years experience, and those "wounds" look very suspicious. I call BS on this.

Lindsey, Marty and a friend of Lindsey were there. So Marty might be the guy and Lindsey or friend of Lindsey took the photos. Rule of the road is if you are a rider and you see someone down you stop to see if they need help so it could be a stranger.

I still call BS. The composition of those pics is very suspicious. Those "wounds" look nothing like the wounds from similar accidents I've treated. I still have a strong suspicion that these pics are staged.

Don't look to far into it. It is completely made up. Don't worry.

Look at me narcissism.

Even got the labels out so we can read them. She should've went with the "I was leaving the makeup and grocery store when I crashed" then she could've laid out all kinds of stuff on the road. "I was hurt but thank got my new *add brand* lipstick was okay and cushioned by my gihanna purse that held my *add beverage name*.

Look at me, I'm young, I'm beautiful and I've just fallen off my motorcycle.
I also use these products.

Social media truly brings out the best in people.

Prepare for another group of people saying this is only a "few Instagrammers" and the rest are performing a valuable public service by being slightly less opportunistic narcissists.

Social media is an addictive, societal cancer. It makes everyone unhappy (Stanford researchers proved that nobody benefits from social media - not even the most "popular" people. It entices clowns to pull stunts like this. It has destroyed empathy and caring and replaced them with a false equivalence of likes and shares.

If you're "influenced" by the actions of pictures of a random stranger, you ought to be questioning your life values.

These businesses pry into every corner of your lives thanks to tracking you on your phones, computers and web usage... now, they're listening to your private conversations and handing them over to private contractors to listen to as well. When will you say, "enough"?

People have faked accidents and things before social media existed. This isn't new. People were faking having cancer for sympathy before the internet existed. People tried to do anything for attention before Facebook and Myspace as well.

Also influence is more than just seeing someone drink a certain water. It's reviews and videos using the product. And once again, we've seen this for much longer than the internet has existed. Magazines were basically influencers before they existed.

As for all the people trying to do crazy things for likes. They're not new, they're just seen by more of an audience. You're just exposed to more instances. Instead of seeing 1 case of someone faking an accident, you see all of them. Instead of 1 person lying for attention, you're seeing everyone do it. Because local news doesn't exist anymore. Everything is International.

I am not sure what your point is, I am not sure you are either. This has nothing to do with what I said, whatsoever.

Did people really fake accidents to spruik bottled water before Instagram? Would people have once thought after an accident (assuming for a moment this story is true) "let's put products with their labels facing the camera in the frame while we document our accident"?

You are correct in that there has always been con artists and liars, but that doesn't negate the modern ways social media is creating all of these weirdos who think the greatest achievement in life would be to be a modern-day barker.

What a sad reality we live in...

I think what you meant to say is "what a sad unreality they live in".

The glitches in the Matrix are getting worse....

True enough, however, since so many around us worship and adore those pathetic beings, we all, unfortunately, have to live with this reality. Those people are all around us and make a huge negative impact on all our lives.

Regarding our present society, here is a great email I receive from a colleague:

An Obituary printed in the London Times:

Today we mourn the passing of a beloved old friend, Common Sense, who has been with us for many years. No one knows for sure how old he was since his birth records were long ago lost in bureaucratic red tape. He will be remembered as having cultivated such valuable lessons as:
- Knowing when to come in out of the rain;
- Why the early bird gets the worm;
- Life isn't always fair;
- And maybe it was my fault.

Common Sense lived by simple, sound financial policies (don't spend more than you can earn) and reliable strategies (adults, not children, are in charge).

Common Sense was preceded in death,
-by his parents, Truth, and Trust,
-by his wife, Discretion,
-by his daughter, Responsibility,
-and by his son, Reason.

He is survived by his 5 stepbrothers;
- I Know My Rights
- I Want It Now
- Someone Else Is To Blame
- I'm A Victim
- Pay me for Doing Nothing

Not many attended his funeral because so few realized he was gone.
If you still remember him, pass this on. If not, join the majority and do nothing.

More internet related BS, this looks like a Facebook chainmail which wasn't printed in the 'London Times' because the London Times doesn't exist. The Times is a national newspaper. This is attributed to Lori Borgman and was printed in the Indianapolis Star in 1998.

You are missing the point. Who cares where it was printed or if it was ever printed. It reflects the time we live in exactly.

Looks staged. I had several falls and the results of hitting the road at 70km/h and more were never than pretty, especially since she didn't wear any protective gear. Using such situations (staged or not) for product placements leaves a stale aftertaste. Influencer... 'nuff said.