Lasers Take Down a $20,000 Camera in Less Than One Second

Hopefully you already know this but, concert lasers will kill your camera. They are bad for your eyes and equally so for your lovely camera sensor. This isn't a random unlikely occurrence. It will happen every time, to any camera with a digital sensor. It doesn't even matter how high-quality your gear is as evidenced by the above video from a once lovely RED Epic. Apparently the video was taken during the Electric Daisy Carnival 2013 in Chicago and is from one of the two cameras destroyed that day.

Of course the cameras can be repaired for less than what they cost but it's still damage that renders it useless until repaired.

In summary, today's lesson is that in the game of Rock, Sensor, Laser... I'm playing laser every time.

UPDATE: Apparently the cameraman has removed the original video and another link to the original hasn't surfaced yet. However, I've found another example of the same situation and updated the video. All I can show you from the original are these two before/after screen grabs. 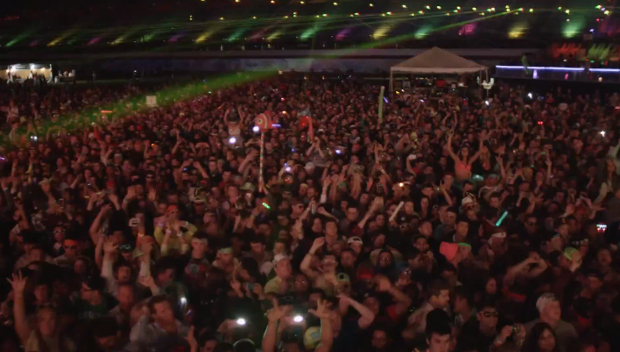 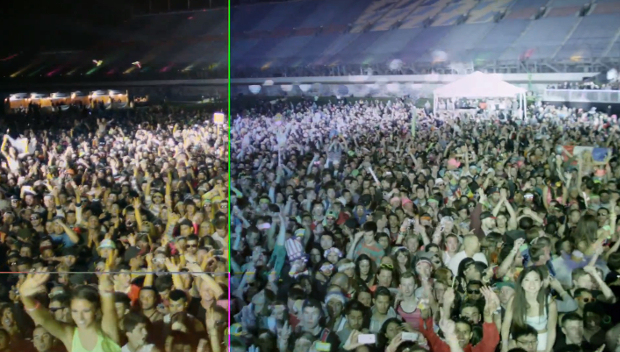 The alternate video now shown at the top of this article is from an unknown music festival last year shot by MLC Productions. Yes, that means this has happened more than once.

Got it... so next time I rob a bank... just got to remember the lasers.

make sure you rob a bank with video and not film cameras (yes, they're still out there)

Didn't actually know about this one, super glad I do now. You'd think they'd warn you about this stuff...

Isn't that how the dude in Tron Legacy took down the security cameras?

Why was the video taken down?

No idea, but the article has been updated with a different example.

Prob cus the cam Co said take it down and make no more comments and we will give you a new one!!!! thats just a thought

So basically if someone asks you to shoot their band and there are lasers there, flip them off and leave the place?

No you dont flip them off you charge them more. Your gear should be insured if its not make them sign a document that says you will charge them for any damaged gear.

A band that would agree to pay you more &amp; compensate you for any damaged gear? are we talking about the real world here.

You have a point... but that being said any band that can afford lasers could afford to pay more. ( At least the lasers that would do damage to a sensor )

ehm, your only talking about a £1000 laser in most cases, its not as much as you think

Just my 10 cents. My gear is insured so i would just add a clause saying that any damage they are responsible for the deductible and thats only like 1,000.00 dollars. Most bands that the "average" every day photographer is going to shoot is not going to have lasers. And the bands that do have lasers are normally the "larger" big bands that could afford to pay for damages.

Any yahoo with a pointer could take out your sensor.

You'd think someone operating at this level would know better.

So but the laser has to shine into the lens to damage the camera?

Yes - sensor needs to be hit by the laser - so either mid photo, autofocus, liveview or recording video

Video has been taken down by the owner .. Wish i could of seen this !

Article has been updated.

Have done quite a lot of nightclub photography (how I got into it really) - know of several friends who've have sensors killed in DSLRs.
If that's your area - then it's just dangers of the job. Just try to minimise by going off the lasers path.
&lt;-- PS See logo ;)

Quick, someone get this story to Beyonce! She'll have hundreds of lasers scanning the crowd continuously throughout her shows!

Does this count for lasers used by the rock band MUSE aswell? Because I'm not exactly sure what kind of laser they use. fx. I took a picture like this ( http://www.flickr.com/photos/98685286@N06/9254885026/
) at a concert in Hamburg, and If I am to attend to another of their concerts and want to take pictures I don't want to ruin my camera WHEN they use lasers.
(I am aware that there are no lasers in the picture I showed you)

Pretty sure those are just spotlights/stagelights, not lasers.

I would burst into tears if that happened to my camera!

We humans have the feature to be able to close our eyes as a reflex to the bright light, which is also the safety meassure when selecting the maximum output of the laser. Eye reflex speeds are arround 400ms, so if you can move your camera out of the beam in 400ms, you're ok :)

are there filters or anything that help with this?

People should know by now that lasers and camera sensors don't get along.