The first trailer for the latest "Tomb Raider" film has been released along with an official poster, which is drawing all the wrong kinds of attention due to a Photoshop fail.

Naturally, Twitter is ablaze with comments from fans, ridiculing the apparent error. The poster shows Alicia Vikander, who plays Lara Croft, poised and ready for action whilst engulfed in the ocean. Except, her neck has been drawing comparisons to a raptor, thanks to it being unnaturally long.

One Twitter user, @MikeJMika, even took the time to re-edit the poster, posting online the amended version which be believes looks considerably more realistic.

Anybody else notice the horrible Photoshop job on the Tomb Raider poster? Left: Theirs Right: My fix up. pic.twitter.com/BSVjOVu2d3

Of course, being an online forum, others have hit back to suggest that, firstly, she naturally has a long neck, while others claim the light in the shot used on the poster makes it look longer than it actually is.

Is this the result of a questionable Photoshop job? The film is out in March 2018, and so far seems to be drumming up reasonable publicity… just probably not for the reasons the producers hoped.

What do you think? Have they gone too far editing her neck?

I'd be willing to bet this was a call made by an executive and not the photographer or retoucher. This sort of thing screams of a situation like:

Exec: "Looks great but make her head bigger as we need to brand her likeness"

Retoucher: "But it will look ridiculous, are you sure?"

Personally, I've been down that road so many times doing agency work. The client is always right, even when they are wrong. You warn them when an idea is bad, but ultimately it's their call. (And the call is almost always something ridiculous)

Googled Alicia Vikander. Looks to me like genetics not Photoshop.

I think the PS was a little overdone, but here is a good reference photo. 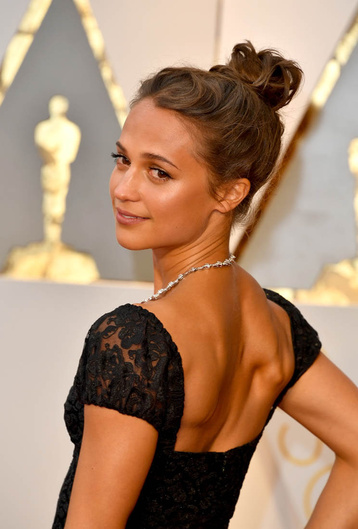 Guys guys you have it all wrong! What's happens is that in the movie, Father Mathias breaks his neck and let her for dead, but Xavier recovers her body replace the broken vertebras with Adamantium ones. After all that process, she discovers that her grand grandmother fell in love with a velociraptor and that she has the extensible neck genes who happens to skip two generations. Which is great because she is going to need it in the final battle against Mazinger Z

I dont know what to expect from this movie.. But i do keep my fingers crossed.
http://exclusives.com.ng

I use to convert movie posters into billboards, if you can only see their 2 gig photoshop files you'll be surprised what real. That's probably not even her real arm or head shape, the neck is most likely a product of an art director saying something stupid to a union artist like " Hey stretch her neck to give more white space", instead of saying lower her shoulder to show more space.