On Tuesday, June 18, just after 8pm Christine Calderon, 23, was attacked and fatally stabbed by three transient men that were holding signs begging for money. After Christine snapped a photo of them because of the offensive language on their cardboard signs the men demanded money. When Christine and her friend refused the men attacked and later that night she passed away from the stab wound to her torso at Cedars-Sinai Medical Center. The attack happened on the popular intersection of Hollywood Blvd. and Highland Ave. where tens of thousands of tourists visit each year.

The stabbing occurred on the "Walk of Fame" and three men have been arrested in connection with the attack. The LAist reported, a man who identified himself as Calderon's companion that night agreed to describe what happened and share a photo he took shortly before the incident. He says Calderon's phone has a similar image. (We spoke to LAPD Detective John Skaggs who confirmed the suspects they picked up had the same sign.) He said that he and Calderon had decided to go out to have a couple of drinks in Hollywood when they happened upon the two men pictured above. He said they thought the signs were funny, so they joked about it, snapped some photos and walked away. One of them shouted at them: "If you're going to take our *obscenity* pictures, you need to give us money." When the pair walked away without giving them money the men attacked them and in the altercation Calderon was fatally stabbed. 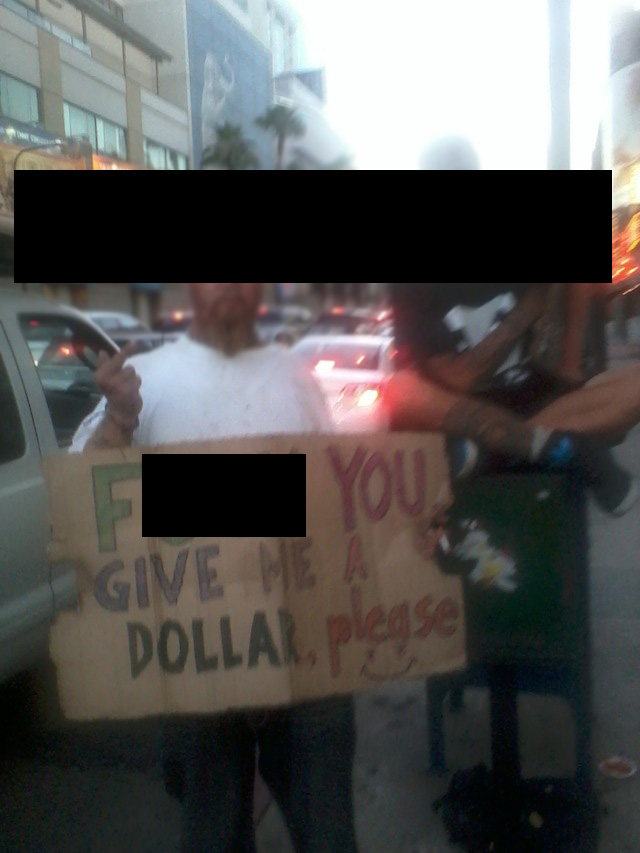 “Just be aware of your surroundings and be careful. Generally, in my experience as a law enforcement officer, transients don’t like their pictures being taken,” LAPD Officer Cleon Joseph said. “I’m not saying that’s a cause or reason for anything, but at the end of the day you need to be careful,” he said.

I walk past those guys on my way home from work every day. They are aggressive and rude to tourists.

scary you have walked by them!

I hope the killers are executed. But who are we kidding? We don't rid the streets of evil anymore.

I say a prison in Alaska with never ending hard labor.

A poor womans life and legacy is now over. She will never see this life again because of two selfish, self centered idiots. They need the death penalty. Let them be tortured with knowing on a certain date their lives will end.

Thats the easy way out. How about they pay for their crimes in jail, and instead of killing them show them love and forgiveness.

I am disgusted by this, HOW DOES MORE VIOLENCE AND HATE FUCKIG SOLVE ANYTHING? If it is wrong to take a life, then we are not justifyed in executing murders, this is a blatant contradiction.

I think hard labor in a camp would be much better for criminals.

Truly sad. Death is too good for them. Really brutal labor for the rest of their lives, while chained in shackles, would be a suitable punishment. Where do they get off begging then demanding then killing? If you're a beggar be a beggar. But these guys were simply lazy fools, now murdering lazy fools. I say work 'em 'till they bleed.

I saw the very much the same last month on the Strip in Vegas.

A man was sitting on the sidewalk with a handmade placard declaring, "F**k you, gimme a buck."
Feeling rather beneficent on this marvellous desert morning, I enquired, "May I take a photo of you for three bucks?"
He said, "F**k you, what do you take me for?"
"Why", I replied, "a beggar, surely?"
He said, "F**k you."

I never did get the shot. Perhaps I was lucky.

The sad thing is that if convicted these guys will get rewarded with free room and board, three meals a day, free cable, and some close to college level education for killing this girl.

You've been in prison much I see.. and no, it is not like a hotel.

Free room and board, that's were it ends though...and no I havent been there, But I know someone who has...it's no picnic and its not a holiday.

Yet it's still going to be better than a life on the streets. They won't care about incarceration, it'll still be an improvement.

You get a bath...with a 100 other guys...no thanks!! I would never have stopped to take a picture like this women did...maybe she just thought it was interesting, we'll likely never know, but there is so much meanness and mental illness in this group of people, probably we are better off with them locked up. :(

In Quebec it is.

Please don't compare prison to summer camp... Not even close!!!

I don't get all the comments about death penalty. I dont think anyone should have the right to decide who should live or die.

Because too many people get to take a life and pay absolutely no penalty for it. Going to jail is not a penalty for cold blooded murder.

So what you're saying is murder is bad so we should murder murderers... there's too much irony in that.

There is no irony at all. There is finality in making the world a better place. Crazy people that go around stabbing people to death do not belong.

Why not love and forgive them, and hope to see them become better people?

You mean let them off with it? I'm assuming you're being sarcastic there.

Finality also for the ones that were innocent.. and yes I have studied law enough to know that we can never be certain of guilt. And even if we could, we shouldn't make a distinction between who is more guilty and less guilty, because things that may seem sure are often not.

If burning black peoples home, attacking homosexuals, stripping women their right to abortion is crazy then I might agree with you.

But I'm guessing crazy probably isn't as inclusive as it should be. and that is where the dangers lies.

Crazy would be stabbing someone to death for taking a photograph.

and YOU get to pick what is crazy and not crazy? A commity? Jury?

And nothing can atenuate and nuance the events?

Anyone who thinks as black&amp;white, good and evil as you scares me deeply.

Once again because you seem to be jumping all over the place. A person that murders another person over a simple photograph deserves the death penalty.

Yet you see no irony in rewarding a murderer with room and board, meals,
television, recreation and education all paid for by the taxpayer? Not
to mention that here in California Sacramento has been releasing
criminals—some dangerous—early because of prison over-crowding, and a federal court order has just called for 10,000 more to be released. I
find your lack of common sense frightening and dangerously out of touch
with reality. But you're a hero for wanting everyone to live, regardless
of how utterly worthless and detrimental they are to greater society.
Congratulations.

1. There is no person or group of people in this world, who should have a right to decide about someones life or death. It is a principle with no exception.
2. In US, people may live in a prison tens of years before execution.
3. Prisons are overcrowded with no violent "criminals" like pot dealers etc.
4. Prisons are private institutions that make money for each inmate. That opens doors for corruption.
I find peoples ignorance frightening.